Is This 'Goliath Skeleton' Real?

Some of the images in a collage purporting to show the discovery of a "Goliath skeleton" date back to a 1993 tabloid article. 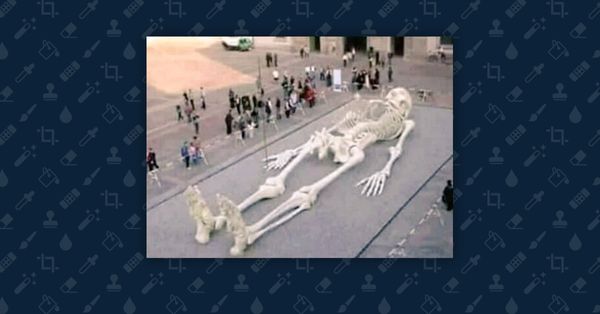 Claim:
A series of photograph show the skeletal remains of the biblical giant Goliath.
Rating:

A series of images purportedly showing the skeletal remains of the biblical figure Goliath, along with the claim that the massive fossil had recently been unearthed in Jerusalem, gained popularity online in February 2018: The images -- which show neither a Goliath skeleton nor a recent archaeological discovery -- have been online in various forms for more than a decade. Each image used in the graphic above has a different origin. The idea of a Goliath skeleton likely originates with the infamous tabloid the Weekly World News. The tabloid published images purportedly showing the giant's slingshot-wounded skull in their June 1993 issue and then followed that up with a series of stories about the fictional discovery, complete with quotes from made-up archaeologists.

Quotes from that 24-year-old article are still used today. For instance,  Daily Voice used a Weekly World News quote attributed to the (fictional) archaeologist "Dr. Richard Martin" in their in their February 2018 "Goliath" article:

Archaeologist Dr. Richard Martin says: “We found the skull in the Valley of Elah, in the foothills of the Judean Mountains, where David’s battle with Goliath took place. The skull is huge and clearly belongs to a man of enormous stature.”

Tests show that the skull is between 2 900 and 3 000 years old - about the right time for the biblical battle.

Dr. Martin says: “This is the archaeological find of the year.”

The Goliath "discovery" is neither recent nor real. Weekly World News was a sensational tabloid that frequently published outrageous claims, including the existence of "bat boy," a half-boy, half-bat superhero. The June 1993 issue with the Goliath story also included far-fetched reports about whales trained to ram drug boats and an army of ants that ate 935 people. This image originated in a 2008 hoax photograph contest called "Archaeological Anomalies 12" on the web site Worth 1000:

In this contest you will create a hoax archaeological discovery, maybe Atlantis, a 2,000 year-old Coca-Cola can or a giant's skull. Be open minded, there are many mysteries buried beneath the earth.

The rules of this game are thus: This image was also created for a Worth 1000 contest, this time calling for images that play with size and perspective. The user Whitmath57 created the image. The sculpture, aside from being gigantic, also had a unique pointy nose, a common theme in Domonicis's work, according to Atlas Oscura: None of the images show the skeleton of the biblical figure Goliath. We've investigated several "giant skeleton" photographs in the past but have yet to encounter a genuine photographic record of a giant. If you come across an image purporting to show the remains of Goliath, chances you are looking at the results of digital editing software, forced perspective, or some sort of artwork.