Did George Carlin Say This About Participation Trophies?

One deceitful tactic used to spread opinions is to pretend they were first offered by celebrities. 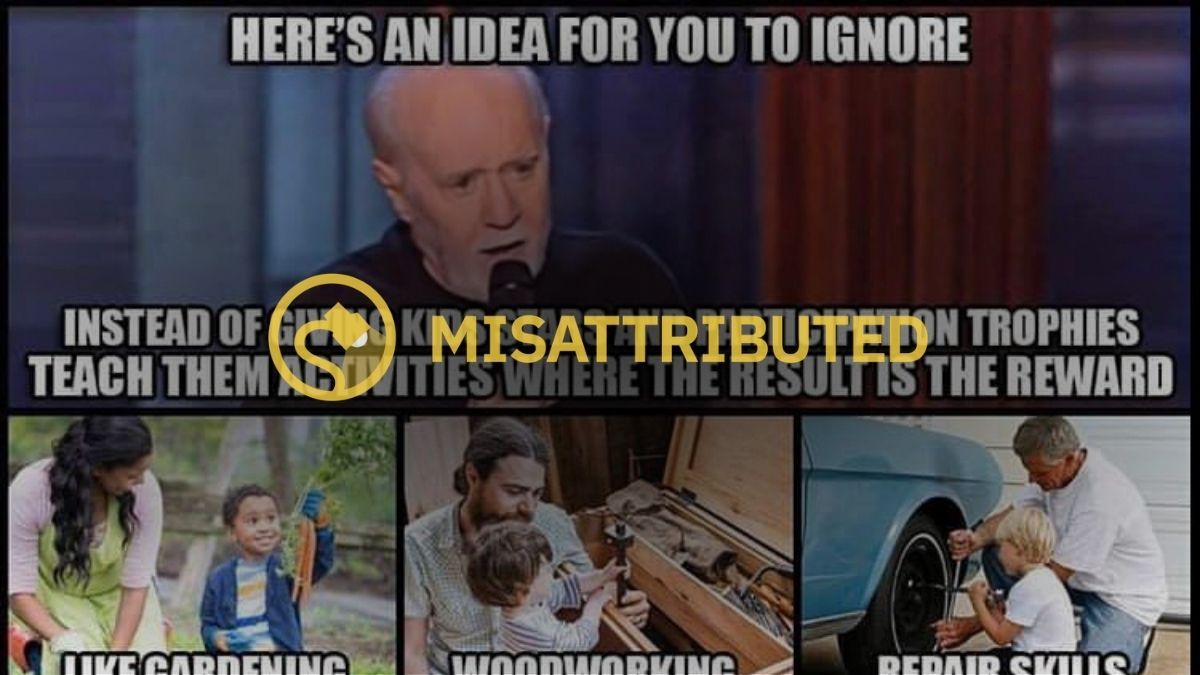 Claim:
George Carlin said: "Instead of giving kids participation trophies, teach them activities where the result is the reward."
Rating:

In February 2022, a meme supposedly featuring a quote from comedian George Carlin about "participation trophies" was recirculated on social media: This is not a genuine quote from Carlin.

The above-displayed meme reads: "Here's an idea for you to ignore. Instead of giving kids participation trophies teach them activities where the result is the reward. Our society has lost sight of what's truly important and it's about damned time we found it again."

We weren't able to find any record of Carlin uttering this phrase. When we looked for the origins of the quote, we did not find an old stand-up routine or a passage from one of Carlin's books. Instead, we traced it back to a 2016 post by Laurie Neverman on the Common Sense Home website. Neverman wrote that she originally posted this message to her personal Facebook page in September 2015 and that since then a number of Facebook pages have attempted to take credit for it:

I wrote the passage above back in September 2015 and posted it on my personal Facebook wall. Friends gave me so much feedback on it that I shared it on the Common Sense Home Facebook page. Then a couple of huge Facebook pages took it and put their names on it (with no credit to me, naughty folks) and it was wildly popular on their pages, too. Given all the people who seemed to approve of the concept, I decided to write a post on it.

This frequently happens with misattributed quotes. A message will get posted by a relatively unknown person and then, in an attempt to legitimize that opinion and spread that message to a wider audience, the words will be erroneously placed into the mouth of a celebrity. For example, Clint Eastwood did not say "the problem is not guns," Jim Carrey did not call for the "media to close for 30 days," and Kurt Russell did not write a poem that opposed defunding the police.

While Carlin did not say this about "participation trophies," he did express similar sentiments during a stand-up routine about how "every child is special."