Do These Transphobic Posts Show a Transgender College Basketball Player?

The posts are both out of date and out of context. 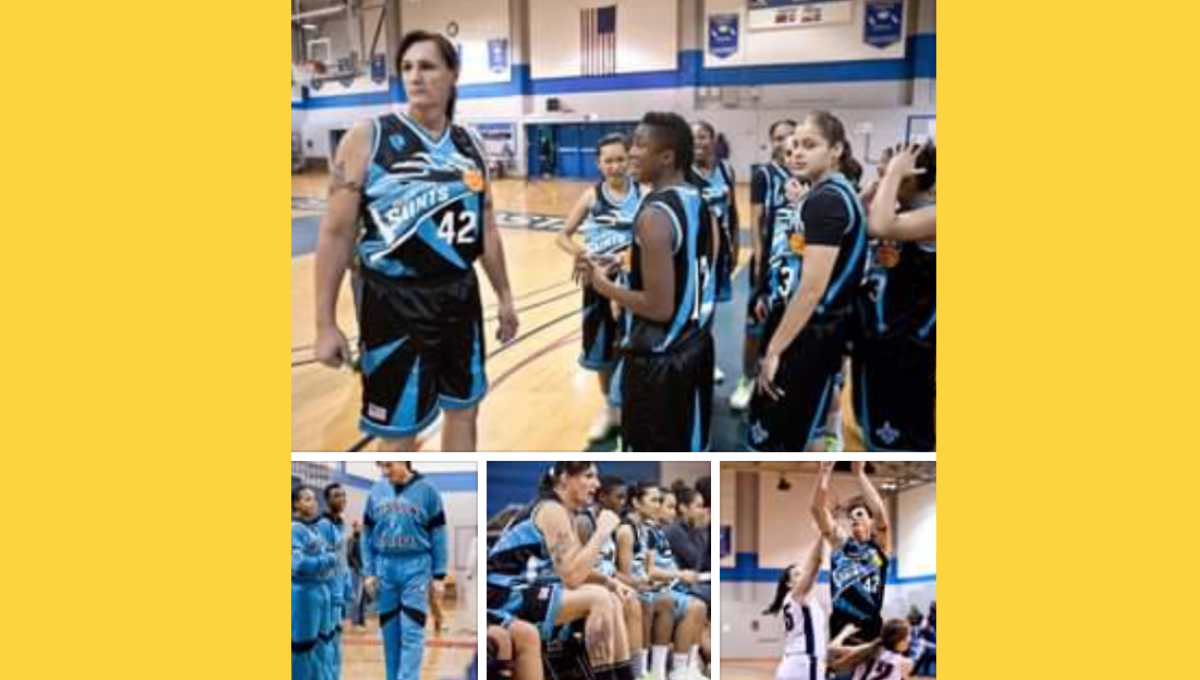 On Feb. 17, 2021, a "parody" page on Facebook shared years-old photographs of a transgender woman, Gabrielle Ludwig, who used to play on the women's basketball team at Mission College in Santa Clara, California.

Despite how the profile appears, the Facebook page in question doesn't belong to sports broadcaster Stephen A. Smith. The page labels itself a "parody" that is in "no way affiliated with" the real Smith. The post became a copyasta meme, meaning Facebook users forwarded it along by copying and pasting it from profile to profile. The text on the post read:

Her name is Gabrielle Ludwig.
Biologically a man, born Robert John Ludwig, ex-Navy sailor declared himself a woman in his 40 s. At 50 years old, measuring 6’ 8”, weighing 220 pounds and covered in naval tattoos, Gabrielle Ludwig caused a huge feeling when she made her college basketball debut for Santa Clara, California community college: playing in the women's league.

The photographs of Ludwig are real, but what the rather dehumanizing text above doesn't state is that they are outdated and out of context. Furthermore, the text of the post and the manner in which the photographs were shared appeared to play into yet another battle in the American culture war that uses the transgender community as a political wedge.

One person who disparagingly shared photographs of Ludwig on Twitter wrote, "let’s not forget to thank #Biden for making this 100 times easier for men to achieve their college dreams."

The images of Ludwig were taken nearly a decade ago by photographer Martin E. Klimek for a USA Today story about her, published in 2012. In that story, and another published in 2013 by ESPN, Ludwig, a U.S. Navy and Desert Storm veteran, described her unique challenge of playing basketball for the community college's women's team. Not only was she the only transgender player, she was 50 when the USA Today story was published, making her the oldest player.

In those stories, Ludwig recounted her long struggle with gender identity and how important playing team basketball was to her process, not just because she loved the sport and the camaraderie, but because it allowed her to fulfill a higher purpose. She told USA Today:

"If the example I can set for the kids who are transgenders in high school, for the people who hate transgender people and for those learning to deal with transgenders, transsexuals, if they see me as a normal person and we are not the bogeyman and love life and raise kids just like you," Ludwig says, "maybe some of this mystery of who these people are will be taken away and there can be more blending into society. People are afraid of what they don't know. I am willing to put myself out there. It was not like that before. It was just about playing basketball. It's about more because I see an injustice."

The USA Today story carries an editor's note that it was updated in February 2021 to conform to the publication's current editorial style.

Ludwig also described how people would react to her presence at games, which was sometimes hostile and uncomfortable, including a man who verbally accosted her coach for allowing her to play, and "the gawking, the whispers and the female referee in Barstow who looked [Ludwig] in the eye and refused to shake her hand."

We spoke by phone to Ludwig's coach at Mission, Corey Cafferata, who told us that reactions to Ludwig's presence on his team had resulted in things like him being shot at with a BB gun and an egg being thrown at him after games.

But Cafferata told us that having Ludwig play on his team "was within the [California Community College Athletic Association] rules. She picked me, she played for me, and I will support her 150 percent. And if I could do it again, absolutely I would coach her again."

In terms of whether being transgender gave her an unfair advantage over the other women players, Ludwig told ESPN in 2013 that the only natural advantage she had was her height. Otherwise, she noted that taking female hormones reduced her muscle mass. At the time the ESPN story was published, Ludwig was 52, meaning she had to work harder than the younger players to get into physical shape.

In our phone interview with Cafferata, he corrected the record about Ludwig's height. Some social media posts claimed Ludwig was 6 feet 8 inches tall. USA Today reported she was 6 feet 6 inches. Cafferata said she was actually 6 feet 5. He also noted that some of the social media posts he saw manipulated Ludwig's image in a way that was blown up to make her look more physically imposing than she was in real life.

Cafferata also said that the claims Ludwig had an advantage over other players are not based in reality.

"We had an advantage in everyone’s eyes until you got on the floor. [Ludwig] was a decent community college player. She didn’t make All-State," Cafferata told us. "The one season where I played her 30 minutes a game, we didn't make the playoffs. She was on only one of my two teams in 13 years that didn’t make the playoffs."

Paul DeBolt currently serves as the women’s basketball coach at Napa Valley College, but worked as coach at Contra Costa College where Ludwig played her first game and many other games after. He described Ludwig as a "wonderful sportsperson" who was "not as dominant as one would think on the court. She got a lot of rebounds. She was older so it was difficult for her to get into shape."

DeBolt said that as a long-time athletics coach, he's never seen evidence supporting the idea espoused by the social media posts about Ludwig that transgender women generally try and seek or have an unfair advantage over other players, calling that a scare tactic.

"And the scare tactics end up hurting people, and keeping us from helping and serving the transgender community like we should be doing. They have rights like everybody else," DeBolt said, noting that transgender people have higher likelihoods of being victims of violence and of attempting suicide.

A spokesperson for Mission told us Ludwig played there in 2012 and 2013. She then served as an assistant coach at Mission for several years before moving on, and is no longer associated with the college or the team.

Updated to include comments from Ludwig's coach, Corey Cafferata.

Updated to include comments from Paul DeBolt, who coached women's basketball at Contra Costa College, where Ludwig played her first game.