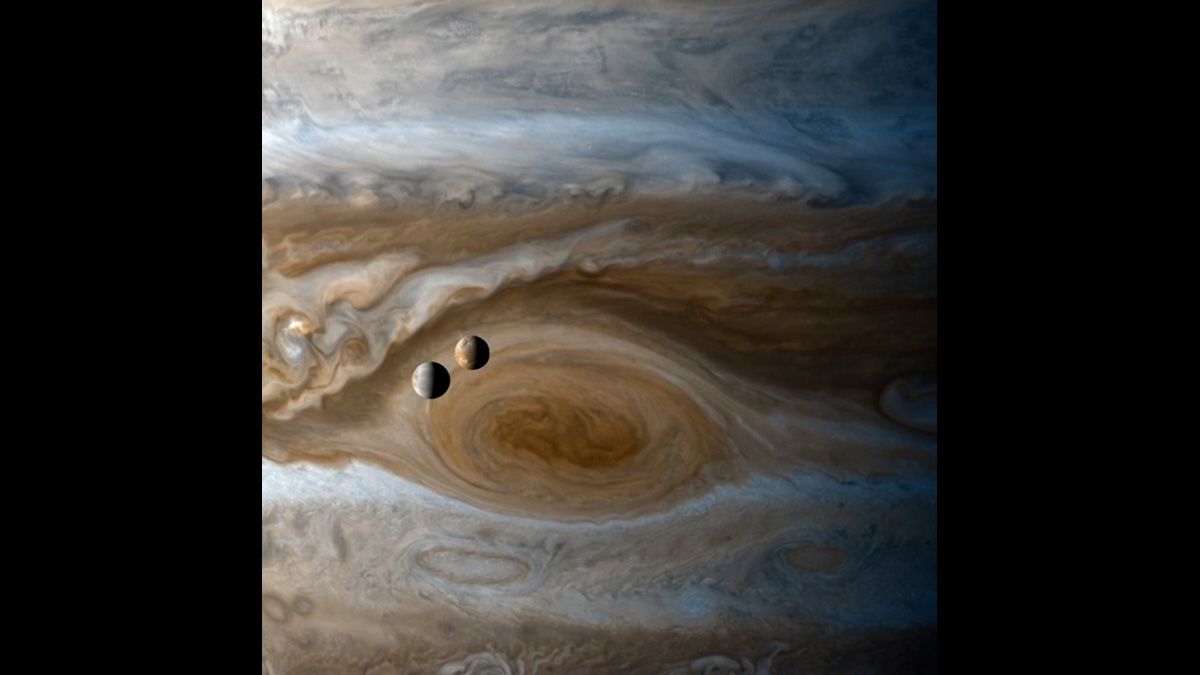 A timelapse video purportedly showed Europa and Io orbiting the Great Red Spot on Jupiter that was captured by the Cassini Huygens probe. (Image Via NASA/JPL-Caltech/SSI/CICLOPS/Kevin M. Gill)

The time-lapse video was created by lining up still photographs shot over a number of hours in January 2001 by the Cassini spacecraft. According to its creator, slight alterations were made so that the presentation of the video looked "prettier than it was correct."

On Jan. 28, 2022, a Reddit user posted a video on the r/Damnthatsinteresting subreddit with the caption, "Timelapse of Europa and Io orbiting Jupiter captured by the Cassini probe."

It's true that this was a real time-lapse video created with multiple still photographs. It was not animation or some sort of faked visual effects or CGI work.

The video was created by NASA Jet Propulsion Laboratory (NASA-JPL) scientist Kevin M. Gill by combining what appeared to be hundreds of pictures of Jupiter's Great Red Spot and two of its four moons, Europa and Io, shot by the Cassini spacecraft on the Cassini-Huygens mission. (The planet's other two moons not pictured were Ganymede and Callisto.)

The four Galilean moons of the planet Jupiter, photographed by the Galileo spacecraft, circa 1996. From left to right, they are Europa, Io, Callisto, and Ganymede. (Photo by Space Frontiers/Hulton Archive/Getty Images)

On Flickr, Gill said that the video, which he titled "Voyage of the Moons," really did show Europa and Io orbiting over Jupiter's Great Red Spot. According to his caption, the second half of the video showed "Titan as it passes over Saturn and it's edge-on rings."

We asked Gill several questions about the video of Europa, Io, and Jupiter, including about one of the more popular Reddit comments, which claimed: "You are not seeing the moons moving to the right as much as you are seeing [the spacecraft] Cassini moving left."

In response, Gill told us: "The motion isn't wholly accurate as I made it look prettier than it was correct. But it's meant to portray the motion visible from a spacecraft that's moving at a velocity faster than the moons are orbiting. So, from a stationary perspective, Io would move faster than Europa."

According to NASA, Europa orbits Jupiter every 3.5 days, while Io only takes 1.77 days. Jupiter, the largest planet in our solar system, with two of its satellites, Io on the left (above Jupiter's Great Red Spot) and Europa on the right, March 1979. The image was taken by the Voyager 1 spacecraft. (Photo by Space Frontiers/Hulton Archive/Getty Images)

We were also curious about how much time went by in the video that was posted to Reddit (the first half of the Twitter and Flickr videos). "Oh, I'm not sure. It would be a few hours of motion being depicted," Gill said. "The motions and wind speeds of the belts, zones, and GRS are more or less arbitrary and simulated."

"The still images are from early January 2001 as Cassini received a gravity boost from Jupiter on its way to Saturn," he told us. Here's what an unaltered picture captured by Cassini looked like three months later: The Cassini spacecraft itself was about 10 million kilometers from Jupiter when recording this image of Io over the planet on April 20, 2001. (Photo courtesy of NASA/Newsmakers)

In sum, yes, the time-lapse video posted to Reddit really did show photographs of Europa and Io orbiting Jupiter over the Great Red Spot. The video was slightly altered to look "prettier than it was correct," according to a NASA-JPL scientist, but at its core, it was real.