Is This a Real Photo of Earth, Venus, and Jupiter Seen From Mars?

Some amazing and authentic images have been taken by the Martian rovers, but this isn't one of them. 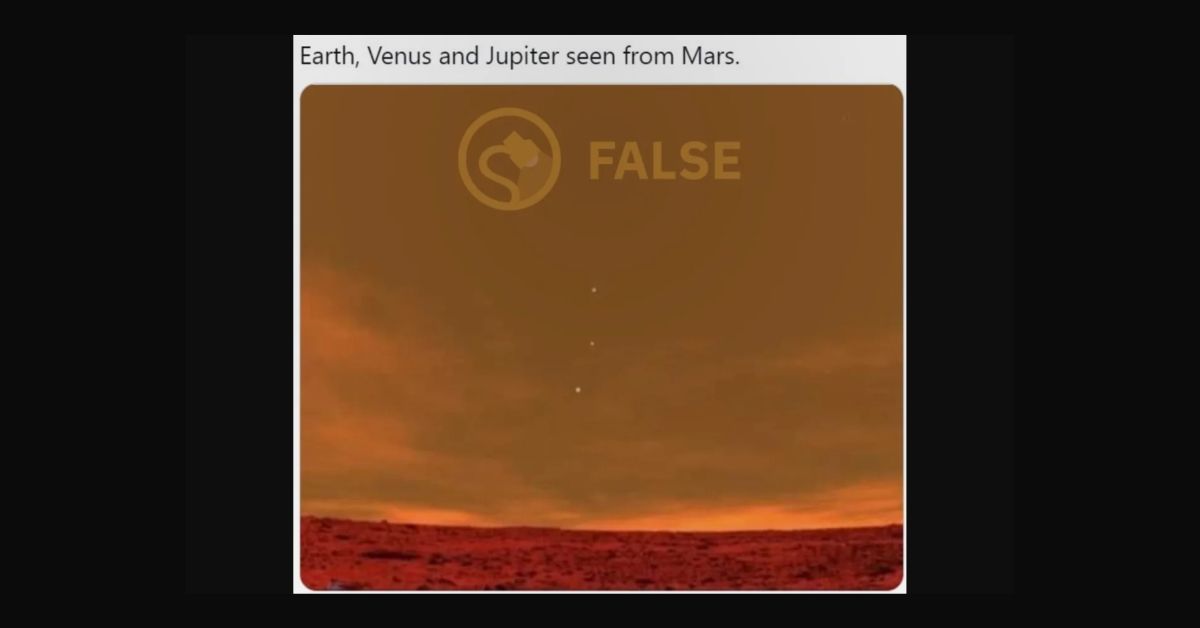 Claim:
A photograph taken from the surface of Mars shows Earth, Venus, and Jupiter.
Rating:

On Feb. 18, 2021, NASA's Perseverance Rover touched down on the surface of Mars. As earthlings celebrated the momentous occasions, videos and photographs that were supposedly taken from the Martian surface started to circulate on social media.

While NASA's Martian rovers (the Jet Propulsion Laboratory has landed five rovers on Mars: Sojourner, Opportunity, Spirit, Curiosity, and Perseverance) have truly captured some fantastic photographs from the surface of Mars, we have encountered at least two misleading pieces of media in the days after Perseverance's arrival there. The first supposedly captured audio from the red planet. (In that case, the video featured decades-old audio that was picked up by a seismometer, not a microphone. You can read more about that here.) The second supposedly showed a view of Earth, Venus, and Jupiter from the surface of Mars. This is not a genuine photograph that was taken from the surface of Mars, and this image did not originate with NASA.

This image supposedly showing Earth, Venus, and Jupiter from the surface of Mars has been circulating online since at least 2012. Science blogger Phil Plait examined the photo at the time and found that this was a computer generated image, not a genuine photograph. The biggest giveaway was that the letters "NE" (for Northeast) could be spotted in the bottom corner of the image, indicating that it was made with planetarium software such as Starry Night or SkySafari.

The letters are "NE". As in, "northeast" ... is exactly what you see when you use planetarium software on a computer to display the sky. Programs like Starry Night, SkySafari, and so on will put the cardinal directions (north, south, and so on) along the horizon to indicate what direction you’re looking. And many of them will display the appearance of the sky from other planets. It’s clear that’s what we have here: a rendered view from Mars using planetarium software.

Plait's theory that this was created with planetarium software appears to be right on the money. This image can be traced back to a June 2010 blog post on the Blogger website riofriospacetime. The original post by Louise Riofrio, who writes in their profile that they are a "full-time scientist," explains that "this is the view you would see" if you had been standing on the surface of Mars at 1:14 PM Universal Time on July 15, 2010. While we can't confirm that this is truly what the Martian sky would have looked like at this date, Plait wrote that this celestial scene is certainly possible.

Another major giveaway is that this image can't be found on NASA's website.

While the above-displayed image is not a genuine photograph taken from the surface of Mars, NASA has truly captured an image of the Earth from the red planet. In 2014, NASA shared an image taken by the Curiosity Rover that showed the Earth and the moon shining bright in the Martian sky: Updated [25 February 2021]: Added more information about the source of the image.