Did a Dominion Voting Systems Employee Brag About Rigging the Election Against Trump? 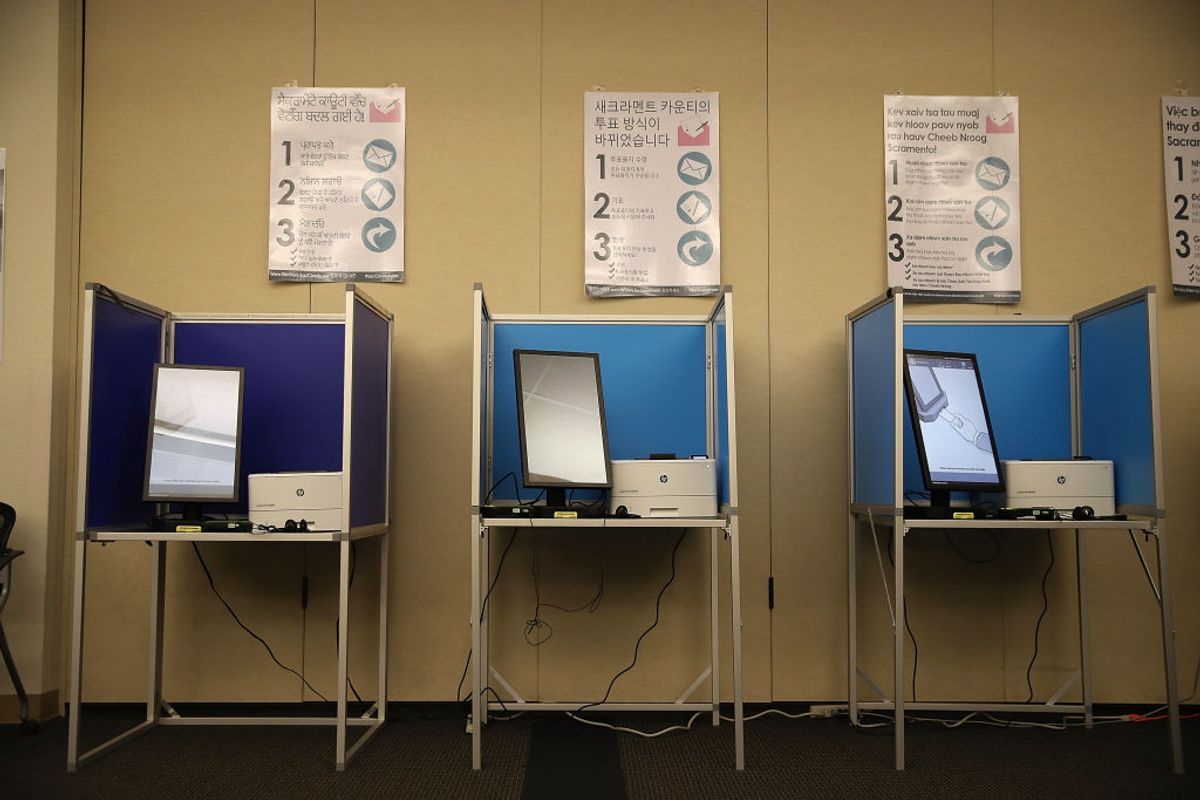 In the aftermath of the 2020 U.S. presidential election, outgoing President Donald Trump, along with many of his allies and supporters, promoted a slew of unfounded conspiracy theories and allegations that electoral fraud played a telling role in the victory of Democratic nominee Joe Biden.

In particular, election denialists focused on Dominion Voting Systems, a company that sells electronic voting machines and software in North America. We have previously addressed several of those claims in detail. In mid-November, Snopes readers asked us to look into one widely shared set of claims surrounding Eric Coomer, who is Dominion's director of product strategy and security.

On Nov. 13, the right-wing commentator Michelle Malkin interviewed Colorado businessman and right-wing activist Joe Oltmann, who made a number of allegations against Coomer.

Oltmann claimed he had infiltrated local antifa groups in Colorado, and in September 2020 took part in a telephone conference call. He said during that conversation, he heard a man named Eric speak, and another caller referred to him as "Eric, the Dominion guy." According to Oltmann, another participant in the call asked "What are we going to do if fucking Trump wins," to which, according to Oltmann, "Eric" replied "Don't worry about the election. Trump is not going to win, I made fucking sure of that. Hahaha."

Oltmann also posted what he presented as screenshots from Coomer's Facebook profile, which he broadly characterized as evidence that Coomer is an antifa adherent or activist who, given his position within Dominion, bragged about taking improper actions to alter the results of the 2020 presidential election, in a phone call with other antifa activists.

In a Fox Business interview on Nov. 15, Trump's personal attorney Rudy Giuliani alluded to Oltmann's allegations against Coomer, saying "One of the people there [at Dominion] is a big supporter of antifa and has written horrible things about the president for the last three or four years."

On Twitter, the president's sons and campaign surrogates Eric and Donald Trump Jr. also promoted Oltmann's allegations. The Gateway Pundit and Neon Nettle additionally claimed, in their articles, that Coomer's profile had recently been deleted from Dominion's website, in response to Oltmann's allegations.

In a news conference by the Trump campaign's legal team on Nov. 19, attorney Sidney Powell raised Oltmann's allegations, inaccurately describing Coomer as an executive at Smartmatic, an entirely separate elections technology company which has itself been the subject of various conspiracy theories that Snopes has previously addressed.

Snopes found an "Eric Coomer" Facebook account whose profile picture matched the one Oltmann identified as being owned by the same Eric Coomer who has worked for Dominion, and from which he posted several screenshots. We have not yet been able to independently confirm that that Facebook profile belongs to Dominion's director of product strategy and security, and the profile does not feature the posts attributed to it by Oltmann. (Oltmann claims Coomer deleted those posts after Oltmann shared them, but we have not yet been able to verify this, either).

Nonetheless, we contacted the person behind the Facebook account and invited them to clarify whether they are indeed the same Eric Coomer who worked at Dominion, and to respond to Oltmann's allegations. We did not receive a reply. After this fact check was published, Coomer sued Oltmann and others for their role in making and promoting the allegations against him. In Denver District Court filings, Coomer strenously denied those allegations.

For its part, Dominion told Snopes "Where members of our company have been subject to threats and harassment, we have reported these issues to law enforcement.  We have also worked to report threats and disinformation being spread online. However, we will not discuss any current or former employees given privacy and safety concerns."

The company explicitly refuted the claim that his profile had recently been removed from Dominion's website in response to Oltmann's allegations. Closer examination shows that screenshots used to make this claim by Gateway Pundit and Neon Nettle actually originated on Lead Candy, a sales and marketing website.

That policy states that "We prohibit attempts to use our services to manipulate or disrupt civic processes, including through the distribution of false or misleading information about the procedures or circumstances around participation in a civic process." According to Twitter, permanent suspensions are reserved for "severe or repeated violations" of the civic integrity policy.

On Dec. 22, 2020, after this fact check was first published, Coomer sued Oltmann, Malkin, Powell, Giuliani, the Trump campaign, the Gateway Pundit and others, alleging defamation, civil conspiracy, and intentional infliction of emotional distress. In his civil complaint, Coomer strenuously denied the allegations against him, writing:

We don't know whether Oltmann's allegations against Coomer are accurate or not. However, the evidence Oltmann has so far made available does not demonstrate the accuracy of his claims. Furthermore, Coomer has strenuously denied those allegations, and sued Oltmann and others for defamation. If further substantive evidence becomes available, we will update this fact check accordingly.

"Trump is not going to win"

Oltmann's primary allegation, that he heard Coomer bragging that he had interfered in the 2020 presidential election in order to ensure Trump's defeat, does not appear to be supported by evidence beyond Oltmann's own account. Snopes asked Oltmann whether he had an audio recording of the purported antifa conference call, or if he was joined on that call by another person who could corroborate his claims. Oltmann did not directly respond to those requests.

That doesn't necessarily mean Oltmann's claim is false, it just means it is so far not supported by any publicly available evidence beyond his verbal account. On the Nov. 19 episode of the Conservative Daily podcast, Oltmann indicated he had filed a sworn affidavit reiterating his claims. Snopes requested a copy of that affidavit, as well as details of the court to which it was purportedly submitted, and the case to which it was purportedly attached. Oltmann did not respond to that request.

It's also not clear whether Coomer's alleged remarks, if they did take place, were made in earnest, and therefore whether they should be interpreted as proof of election meddling. Oltmann told Malkin he had heard Coomer laughing after allegedly bragging about interfering in the election ("Trump is not going to win, I made fucking sure of that. Hahaha.")

Furthermore, even if Coomer made the comment in earnest, he might have been lying, either to impress others on the call, to exaggerate his power and influence, or for some other reason. In his lawsuit against Oltmann and others, Coomer firmly denied having any knowledge of, or taking part in, any "Antifa conference call."

In mid-November, Oltmann published what appeared to be several screenshots from the Facebook account of an individual named Eric Coomer. We found an account whose profile picture matched that of the account apparently featured in the screenshots, but we have not yet been able to verify that it is owned by Eric Coomer from Dominion.

Snopes asked Oltmann for any and all relevant screenshots, archived links and URLs relating to what he presented as Coomer's past pronouncements on Facebook, and in particular any concrete evidence demonstrating that the Facebook account did indeed belong to Eric Coomer from Dominion.

In response, Oltmann told Snopes he had "over 200 pictures and screenshots," though he didn't specify whether they constituted the proof we had requested. Oltmann expressed reluctance about providing them to Snopes, and ultimately did not do so in time for publication. If we receive substantive additional evidence, we will update this article accordingly.

Since we haven't yet been able to verify the authenticity of the screenshots, or confirm that they were actually posted by Eric Coomer from Dominion, we're not linking to them in this article. They included a post that contained a purported statement by "Antifa," but no clear sign that the poster endorsed the statement; a vehemently anti-Trump post from July 2016; a post dismissive of Trump supporters in Texas; posts of YouTube videos for songs whose titles or lyrics expressed antipathy towards police; and a post that strongly criticized a controversial "election integrity" commission set up by Trump to investigate his own unfounded claims of widespread electoral fraud in the 2016 elections.

To reiterate, we don't know whether Eric Coomer from Dominion created the posts shown in the screenshots Oltmann published. However, even if he did, they would not constitute proof of any impropriety on his part, and certainly would not point towards any election interference on his part. They do indicate that whoever created them is strongly critical of Trump and some of his followers. It might be inadvisable for an employee of an election technology company to articulate those views on social media, but the posts are not, in and of themselves, proof of improper actions.

Updated [29 Dec. 2020]: Added references to Coomer's defamation lawsuit against Oltmann and others, and his strenuous denial of the allegations made against him.