Did a Planned Congressional Delegation to Afghanistan Include 93 Family Members?

Conspiracy theorists provided no evidence for claims that Congressional Democrats and their relatives were part of a shadowy plot to remove the president and vice president from office. 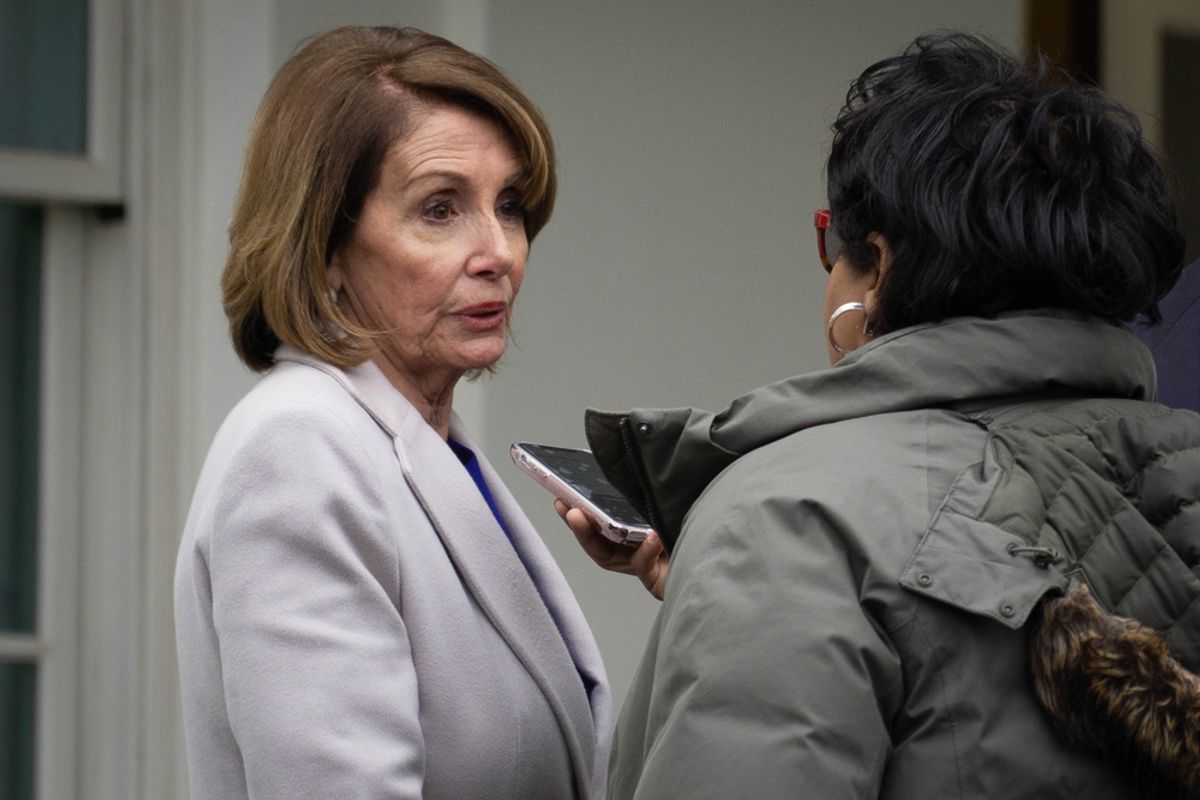 In January 2019, in the midst of the longest-ever federal government shutdown, President Donald Trump and Democratic House Speaker Nancy Pelosi became embroiled in a high-profile dispute.

On 16 January, Pelosi wrote to Trump suggesting that the president postpone his State of the Union address on the grounds that it was a designated "National Special Security Event," and the U.S. Secret Service had by then not been funded for 26 days.

A day later, President Trump responded, informing Pelosi that he was postponing a planned congressional delegation trip to visit American troops in Belgium, Egypt and Afghanistan — an excursion Pelosi had carefully planned and intended to lead, in the company of several other members of the U.S. Congress. Trump wrote:

"In light of the 800,000 great American workers not receiving pay, I am sure you would agree that postponing this public relations event is totally appropriate. I also feel that, during this period, it would be better if you were in Washington negotiating with me and joining the strong border security movement to end the shutdown."

Although the congressional delegation could use commercial flights rather than U.S. military aircraft, Pelosi cancelled the excursion, claiming that President Trump's public announcement of the until-then secret plans had created an insurmountable security risk for the delegation.

Against this background, a rumor emerged online that attempted to discredit and undermine the motives and activities of Pelosi, who has been a frequent target of junk news and misinformation.

On 19 January, the "Marshall Report," a blog that specializes in junk news and right-leaning conspiracy theories, claimed the group that had intended to visit Belgium, Egypt and Afghanistan included dozens of Pelosi's own family members.

The blog post carried the headline "Pelosi's secret overseas mission included 93 family members. Why?" and speculated that Pelosi was leading a conspiracy to facilitate a terrorist assassination of President Trump and Vice President Mike Pence, thus paving the way for her own elevation to the White House. (The speaker of the U.S. House of Representatives is second in the line of succession to the U.S. presidency, after the vice president.)

Why did Pelosis [sic] have all of her children and grandchildren – 93 family members going with her on her trip to Egypt, Afghanistan and Brussells? And 7 congress members? Who takes 93 family members (mostly children) on a secret government business trip on military aircraft, paid for by tax payer dollars?...

...Was Pelosis [sic] planning for the Jihadist Attack that was intercepted by the FBI a day or so ago, in Georgia to be successful? Remember he had rockets. And or was the Georgia arrest a first step leading into an upcoming false flag? Was it planned to take place while POTUS and V-P were together in the Oval Office or in one of the several buildings that were earmarked?

Pelosi is Third in Line of Succession, so if POTUS and V-P were both killed, (GOD FORBID) she would be the next President. Being out of the states (good alibi) the news would coordinate their talking points and gasp as they report how fortunate America is that Pelosi was not in DC! They would make up something like, “If she hadn’t been working overseas she would have been in that meeting and killed too”.  All media would have the same talking points that would be jumbled up and leading to the findings that the Georgia Jihadist was not working alone as they had thought. It was a big operation with several sleeper cells.

The next question is -why would she be going to Brussels, Egypt and Afghanistan? Was she going to meet her deep state handlers in Brussels for her globalization instructions? Was she negotiating a new batch of mercenary’s from the Muslim brotherhood in Egypt? Was she checking on deep state “Poppy Bush’s” CIA opium lab in Afghanistan?  Maybe she was carrying out some diabolical scheme for the UN and NATO?  Who knows?

In support of the claim that Pelosi had intended to travel with 93 of her family members, the "Marshall Report" cited a series of tweets published on 18 January by the @BLUEPRINT_Q account. That Twitter account frequently publishes material related to the discredited "QAnon" conspiracy theory.

In this instance, @BLUEPRINT_Q was outlining a theory that claimed the 2018/19 federal government shutdown was actually part of a plot by President Trump to fight back against supposed "deep state" forces opposing him from within the federal government, by furloughing certain categories of government workers until he can (purportedly) fire them legally.

As part of that theory, @BLUEPRINT_Q claimed that the planned congressional delegation excursion was not for the stated purpose of visiting U.S. military personnel stationed abroad, but rather was linked to the European Union, the Muslim Brotherhood and heroin trafficking. @BLUEPRINT_Q claimed that all of Speaker Pelosi's children and grandchildren were "booked" to take part in the trip, along with six other members of Congress and "93 family members."

It's clear that @BLUEPRINT_Q did not intend to claim that the delegation included 93 of only Pelosi's family members, but rather 93 relatives of the seven members of Congress. This is because @BLUEPRINT_Q cited as evidence for the involvement of family members another series of tweets published by another Twitter account that also frequently and enthusiastically promotes various strands of the QAnon conspiracy theory.

Earlier on 18 January, @5Strat posted a conspiracy theory that claimed the purpose of the congressional delegation excursion was, in fact, to plot the "demise" of President Trump with NATO:

1) The Nancy Pelosi 7 day trip to Europe was in essence Nancy and 6 Angry Democrats going to meet with angry NATO (angry at having to pay their fair share) to plot the demise of @realDonaldTrump . Why should POTUS authorize the Air Force to transport a mission of Sedition?

The original source of the "family trip" theory specified that 93 was the number of relatives of all seven members of Congress, and not of Pelosi alone, writing "it wasn't just 7 angry Democrats. It was their extended families too, 93 of them."

3) Isn't it interesting that Nancy Pelosi had ALL her Children and ALL her Grandchildren booked on that flight?

If I didn't know any better I'd say someone might have been running...

@5Strat did not provide any source or evidence in support of these claims, although they did cryptically allude to a purported need for secrecy about their purported sources, and claimed to have submitted a federal Freedom of Information request for details relating to the delegation.

@5Strat, the original source of that claim, has a history of posting outlandish and bizarre conspiracy theories, especially the discredited QAnon conspiracy theory. In fact, the claim that the delegation included 93 family relatives of members of Congress was part of a conspiracy theory that alleged Pelosi and six Congressional Democrats had intended to travel abroad as part of a NATO plot to assassinate President Trump and Vice President Pence, and install Pelosi in the White House.

The same Twitter account has written that "Extraterrestrials have enslaved this World since the dawn of time," and recently endorsed a numerology-linked conspiracy theory that holds that the dates of various events in President Trump's life — most recently, a "blood moon" on the two-year anniversary of his inauguration — prove that he was chosen by God to lead the United States.

On 19 January 2019, Fred Doucette, a Republican member of the New Hampshire House of Representatives and a co-chair of Donald Trump's 2016 presidential election campaign, promoted the "93 family members" claim and implied that the planned excursion had nefarious and hidden purposes:

We requested comment from all seven Congressional members of the cancelled delegation: House Speaker Pelosi and U.S. Reps. Adam Schiff, Susan Davis, Eliot Engel, Elaine Luria, Stephen Lynch and Mark Takano. We did not receive a response from any of them.

Updated [22 January 2019]: Added mention of requests for comment from the seven Congressional members of the cancelled delegation.