Is Daryl Hannah Pregnant at Age 61?

Hannah is perhaps best known for her roles in "Blade Runner," "Splash," "Wall Street," and the "Kill Bill" films. 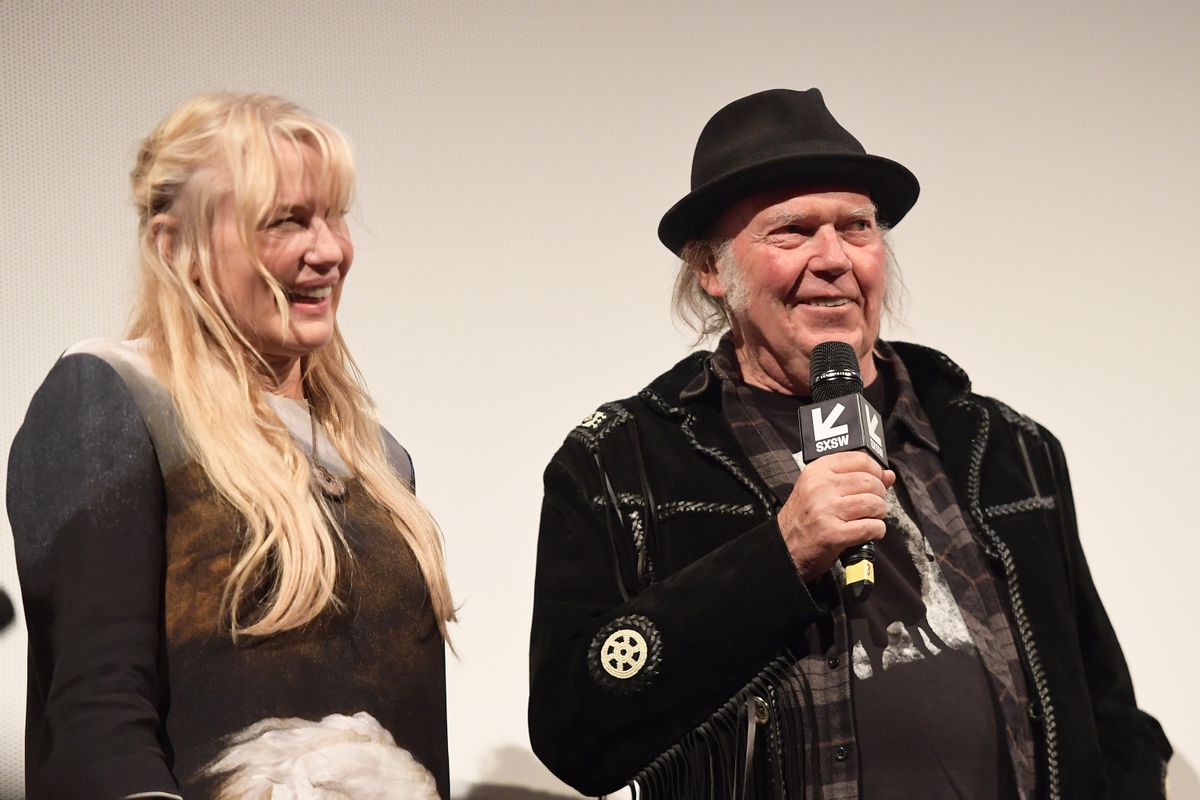 The Madhouse Magazine website had a disclaimer page that described its stories as satire.

This item was not a factual recounting of real-life events. The article originated with a website that labeled its stories as being satirical in nature.

According to the satirical story, Hannah became pregnant at age 60 and made the announcement on social media:

A spokesman confirmed that Neil Young's wife, Daryl Hannah, is pregnant. This will be the couple's first child. Young made the announcement on social media as he posted an image holding a "Prego" tomato sauce jar with the caption, "We are Prego!"

Hannah, 60, is in good health and is being monitored. It is quite rare to become pregnant after age 50, but she's one of a growing number of older new mothers in the United States — a trend that's bolstered by changing societal norms and new advances in fertility treatments.

Several months later, several Twitter users spread the satirical story and described Hannah as becoming pregnant at age 61, not 60, around the time of her birthday, Dec. 3.

This tweet was posted days before Hannah's 61st birthday.

This reference to John F. Kennedy Jr. was about QAnon conspiracy theory supporters who really did believe he was going to come back from the dead. Of course, that was not the case. (Hannah and Kennedy Jr. previously dated before he died in a plane crash in 1999.)

The satirical story appeared to catch on in the middle of December.

We saw various accounts share the satire story on this day.

A snippet from the Madhouse Magazine story was also shared as a screenshot: A section from the satirical story.

In the snippet, it said:

Neil Young, 75, was giddy with excitement as he gushed at the prospect of a new baby. "I understand we are up there in age, but don't let these old grey temples fool ya now. Just because theres snow on the roof don't mean theres no fire in the basement!" Neil then did a few pelvic thrusts to emphasize his virility. "You better stand back" said Neil to the female reporters, "You might get pregnant standing too close to me!"

Giving birth at age 60 may be rare, but just last year a 74 year old woman in India gave birth to twins. "I have the Uterus of a 20 year old and the eggs of a teenager", said Hannah. "There was no IVF or anything like that, me and Neil did it the old fashioned way by humping like jackrabbits."

The satirical story spread well beyond its Madhouse Magazine origins, including in a Sept. 13, 2021, article on heightzone.com. The headline read: "Daryl Hannah Is Pregnant at the Age of 60 with Husband Neil Young, Couple Expecting a Baby Boy!" We stumbled upon similar stories on celebsaga.com and mixedarticle.com.

We also found the purported news reposted a seemingly endless number of times on Facebook: A question with an easy answer: Hannah was not pregnant. This appeared to be a real photograph from 2018.

It's possible that the misleading story from heightzone.com prompted a surge in new posts around Dec. 14, 2021.

"Wrong" is certainly one way to describe "satire."

In sum, the story about Hannah becoming pregnant was labeled as satire but later spread well beyond its origins. For this reason, we have rated this claim as "Originated As Satire." For background, here is why we sometimes write about satire/humor.