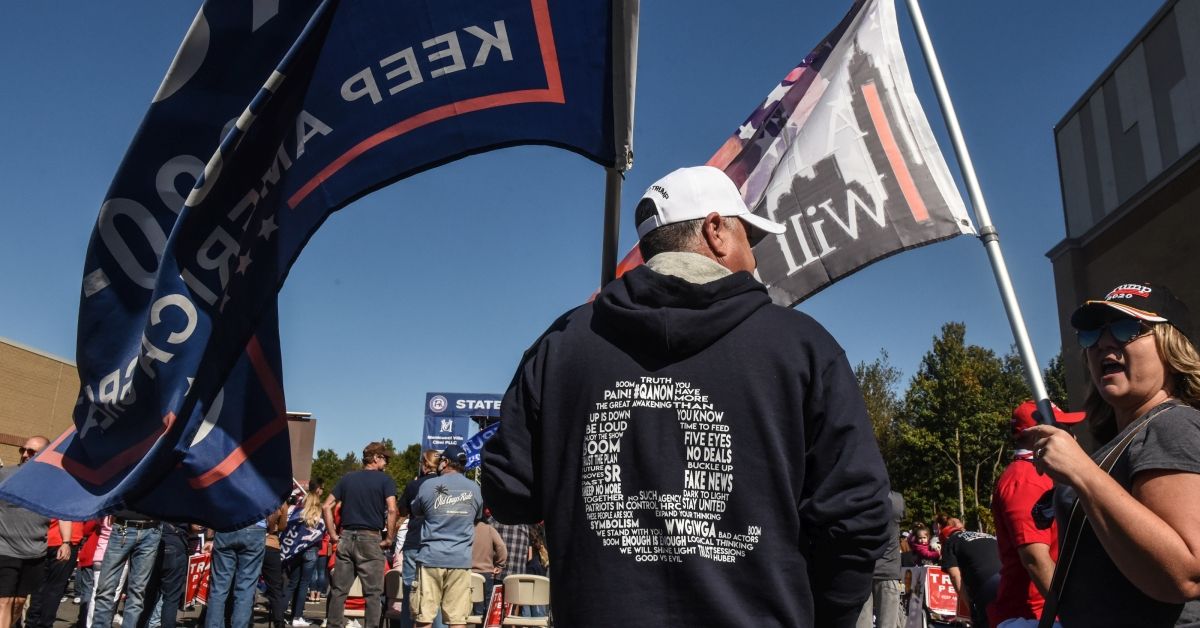 Hundreds of QAnon supporters on Nov. 2, 2021, gathered at Dealey Plaza in Dallas, Texas, the site of U.S. President John F. Kennedy's assassination, awaiting the arrival of a man who has been dead for 22 years, Kennedy's son, John F. Kennedy Jr.

As we have previously reported, followers of the conglomeration of pro-Trump conspiracy theories known as QAnon believe that an anonymous character "Q" who had posted anonymous cryptic messages on internet forums was a high-ranking government official pointing to clues about a coming "storm."

In general, QAnon believes Trump is in the middle of a biblical war against a “deep state,” satanic cabal of baby-eating, child sex-traffickers led by prominent members of the Democratic party, entertainers who espouse liberal opinions, anybody who mentions “pizza,” and authoritative sources who relay credible information that may cast a negative light on the president.

If this sounds far-fetched, observe that, as Daily Beast politics reporter Will Sommer noted, the beliefs of those gathered in Dallas have been denounced by the larger QAnon movement "as a scheme meant to embarrass QAnon believers."

About 300 people, by estimation of journalist Steven Monacelli, who reported on the event for Rolling Stone, had shown up in Dallas waiting for Kennedy Jr. to arrive, believing that President Kennedy's dashing, dark-haired son would reveal himself, along with his father, and become Trump's vice president.

None of this came to pass, of course, as Kennedy Jr. died in a plane crash in 1999, President Kennedy was assassinated on Nov. 22, 1963, and Trump, having lost the presidency in the 2020 election, has no vice president, living or dead.

Those who attended the event labored under the notion that other deceased celebrities, including Robin Williams and Michael Jackson, would be joining the Kennedys in revealing themselves as luminaries in the Qanon movement.

Dallas Morning News reporter Michael Williams interviewed one believer who explained the event attendees' the working theory in the video embedded in the below tweet:

Monacelli told Snopes by email that a "vast majority" of the crowd, some of whom had flown to Dallas from cities across the U.S., stuck around for about an hour after JFK Jr. failed to materialize, while Sommers reported some pivoted to a Rolling Stones concert set for later in the day at the Dallas Cotton Bowl, believing the deceased celebrities would appear there instead.

Monacelli, EJ Dickson, Steven, et al. “On the Ground With the QAnon Believers Who Flocked to Dallas for the Grand Return of JFK Jr.” Rolling Stone, 2 Nov. 2021, https://www.rollingstone.com/culture/culture-news/qanon-kennedy-jfk-jr-dealey-plaza-dallas-1251929/.