Some are calling the group in Dallas a cult. 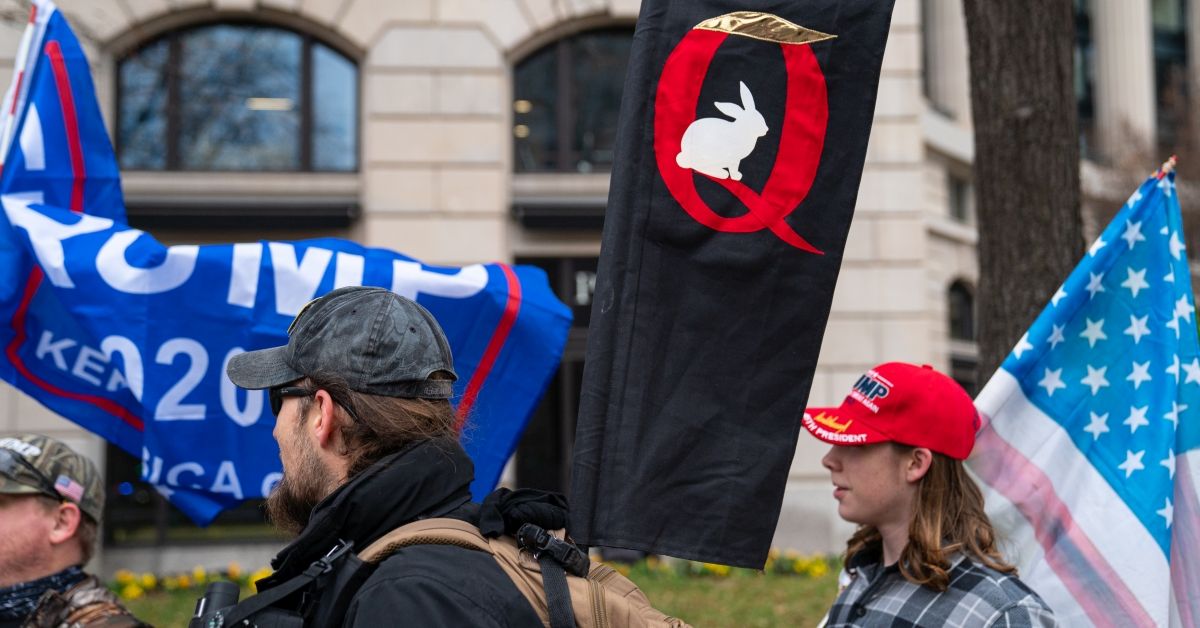 On Nov. 2. 2021, hundreds of followers of a particularly outlandish sect of the so-called QAnon movement traveled from all over the U.S. to Dallas, Texas, where they gathered in Dealey Plaza. Some of them are still there, participating in what some are now calling a cult.

To the outside observer, the group in Dallas in engaging in an obvious exercise in multiple layers of futility. Following the lead of Washington state businessman Michael Protzman, who goes by the online moniker "Negative48," they have frequented Dealey Plaza, the location of 35th U.S. President John F. Kennedy's 1963 assassination. There they await Kennedy's reappearance, along with that of his son, John Kennedy, Jr., who died when the small plane he was piloting crashed in 1999.

The duo, they believe, would reinstate former President Donald Trump, who lost the 2020 election, while other dead celebrities like Michael Jackson and Robin Williams would reveal themselves to be luminaries in the movement.

According to Vice, Protzman promotes deeply anti-Semitic views to his more than 100,000 followers on the messaging platform Telegram and engages in his own brand of bastardized numerology. And per the Seattle Times, Protzman has taken to wearing a tinfoil hat and giving bizarre speeches using numbers as code.

Dr. Steven Hassan, a mental health professional and expert in undue influence tactics used by authoritarian leaders and destructive cults, told Snopes in a phone interview that the group in Dallas "appears to be not only a cult, but an authoritarian cult."

Hassan, who founded the Freedom of Mind Resource Center to help former cult members, is himself a survivor of a cult, the Unification Church, a group also known as the "Moonies." Hassan pointed to a method he developed for identifying mind control tactics used by destructive cults, using the acronym "BITE," namely: behavior control, information control, thought control and emotional control.

Loved ones of some of those gathered in Dallas have stated that Protzman's followers are spending large sums of their own money, or have abandoned their families, and, in at least one case, their children. A video chat between members raised alarms when one man spoke about "physical death" so that "all that's left is the truth."

Although the Kennedys and other dead celebrities like Robin Williams and Michael Jackson failed to appear, dozens of followers have remained in Dallas, hoping for miracles promised by Protzman, the group's leader.

"Cutting off contact with family and friends that’s a huge red flag for me" that the group is a destructive, authoritarian cult, Hassan told Snopes.

According to the Dallas Observer, those who have stayed in Dallas have been using the city's downtown Hyatt Regency Hotel as a base, lining the parade route where JFK was shot and killed in 1963, holding meetings and candlelight vigils.

As of Dec. 4, the paper reported, there's no end in sight for the Dallas excursion.

"The public looks at people like that and thinks they must be stupid or they must be mentally ill," Hassan said of the Dallas QAnon group. "But a lot of intelligent, educated people get their minds hacked."

It's no surprise that a group of believers have remained in Dallas despite the fact that Protzman's "prophecies" about the Kennedys and Trump haven't come to pass. Hassan pointed to a phenomenon that mental health professionals call cognitive dissonance theory.

The theory maintains that people strive to maintain consistency between their thoughts, feelings, and actions. So if they engage in extreme behavior, they also engage in rationalizing that behavior, Hassan said.

He pointed to the case study of a UFO cult in which the leader told followers that the world was going to end, but if they went to a mountaintop and waited on a certain day, aliens would come rescue them in a spacecraft. When that didn't happen, the followers didn't become disillusioned and instead doubled down.

Hassan said what often makes the difference between people who escape from destructive, authoritarian cults and those who don't is their outside connections.

"What I've learned from 45 years of practice is that a critical variable is that members of these closed groups, these destructive cults, if they have warm contacts with family or friends, outsiders who are not believers who interact with them respectfully and kindly and ask questions out of curiosity, not judging how stupid [the cult's belief system] is," Hassan stated.

Murney, Michael. "QAnon Cultists Are Still in Downtown Dallas Weeks Later, but No One Can Say for How Long." Dallas Observer, 4 December 2021, https://www.dallasobserver.com/news/on-qanon-leaders-social-media-a-new-conspiracy-what-if-biden-faked-the-waukesha-parade-attack-12881255