Do Yellow Caps on Coke Bottles Have a Special Meaning?

You'll only find these bottles in the springtime. L’chaim! 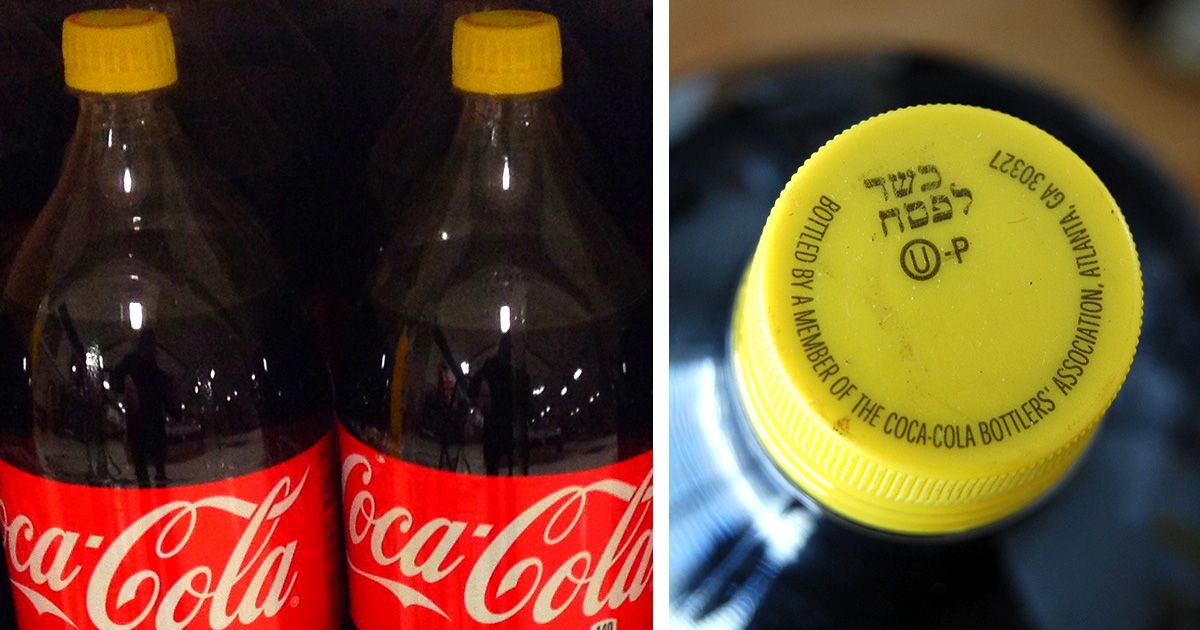 Yellow caps on Coke bottles have a special meaning and it is that the beverage is kosher for the Jewish Passover holiday. (Image Via Mike Mozart and Mark H. Anbinder (Flickr))

Since at least 2021, online advertisements displayed a picture of Coca-Cola bottles with yellow caps alongside the caption: "Ever Spotted a Coke Bottle with a Yellow Cap? You Need to Know What It Means." It's unclear how much money was being spent on the ads.

Readers who clicked the ad were led through an 80-page slideshow article on the Opulent Express website. However, worry not, as we're going with the novel approach of printing the rest of our story on a single page. (We're pioneers.)

It's true that Coke bottles with yellow caps have a special meaning. They're shipped to stores in the spring for the Jewish Passover holiday. For the special bottles, corn syrup is replaced with sucrose to make the beverages kosher for Passover.

According to jewishaz.com, Coca-Cola began providing kosher-for-Passover beverages in the 1930s. This led us to an April 20, 1935 article from the Atlanta Constitution, now known as the Atlanta Journal-Constitution. However, we didn't find a mention of yellow caps:

Coca-Cola is kosher during Passover. Atlanta Jews who enjoy the "pause that refreshes" may continue to spend their nickels on Atlanta's most famous product during Passover Week.

For the first time in Atlanta, Coca-Cola has been included among the foods and drinks that orthodox Jews may use during Passover. This does not mean that the drink is any different now than it has always been, but merely that the Jewish rabbi has performed the necessary inspection and ritual that certifies it is pure in the religious sense of orthodox Jewry.

Signs announcing this fact, bearing the names of Rabbis Tobias Geffen and Harry H. Epstein may be seen in many soda fountains and there is also a special "kosher" mark on the caps of bottled Coca-Cola for sale in places patronized largely by Jews. A Coca-Cola sign is visible at night in Atlanta, Georgia in the 1930s. (Photo by H. Armstrong Roberts/Classicstock/Getty Images)

The first reporting we found about yellow caps on Coke bottles came from an April 2, 1998, article from The Record, a newspaper based in Hackensack, New Jersey. It's possible that the caps had been a tradition in years prior, but this was the oldest story available on the subject in the large library of archives on newspapers.com.

The Record reported that Coca-Cola added a special symbol on the label in addition to creating yellow caps for Coke bottles:

Passover menus were never this ample. Years ago, Passover fare consisted of such basics as matzo, potatoes, and fruits and vegetables, [said Sam Gross, vice president of sales and marketing at Newark-based Rokeach, a major kosher-for-Passover manufacturer].

"It's not just gefilte fish and borscht anymore," he said. "Today there is a whole range of Passover foods. We make everything from cotton candy and rugelach to potato chips and pizza mix." First employees of the Coca-Cola Company in Atlanta in 1898. (Photo by John van Hasselt/Sygma via Getty Images)

We also found a mention of yellow caps on Coke bottles from Ed Franklin in The Boston Globe in a story that was published on April 12, 2006. In the piece, Franklin referenced a big company decision that was made in 1980:

For those who remember the taste of Coca-Cola when it was sweetened with cane or beet sugar rather than corn syrup, the beverage maker has a treat for you over the next few weeks. Its kosher-for-Passover Coke Classic variety, available in the 2-liter bottle with the yellow cap at no additional cost, is sweetened with sucrose for the holiday table.

This is the way Coca-Cola made the formula before the company switched to corn syrup in 1980 in a cost-saving measure, says company spokesperson Scott Williamson.

Many Coke aficionados who are not Jewish but prefer the slightly sweeter taste of the real classic Coke are taking advantage and stocking up while the product is available.

We found several pictures that showed Coke lovers "stocking up" on the "real classic Coke," as Franklin mentioned:

Instagram user @chrisoninstagram also posted a picture of the top of the yellow Coke bottle cap. It showed a kosher label:

In January 1980, Coke spokesman John White told the AP that the switch would not affect the quality of the popular soft drink:

Sugar prices had risen recently because of high demand and low supplies caused in part by poor crops in Cuba and other major producing countries.

Commodity analysts said a switch to fructose could eliminate the purchase of about 200,000 to 400,000 tons of sugar beets or sugar cane over the next few years - an amount they called "minimal."

In sum, yellow caps on Coke bottles do have a special meaning. Their annual, limited-time appearance on store shelves offer the opportunity for U.S. consumers to drink the beverage the way it tasted prior to the 1980 ingredient switch.