Did a Viral Video Really Show Coke and Mentos Causing a Bathroom Explosion?

The "Mentos effect" is a real phenomenon, but can it really cause this much damage? 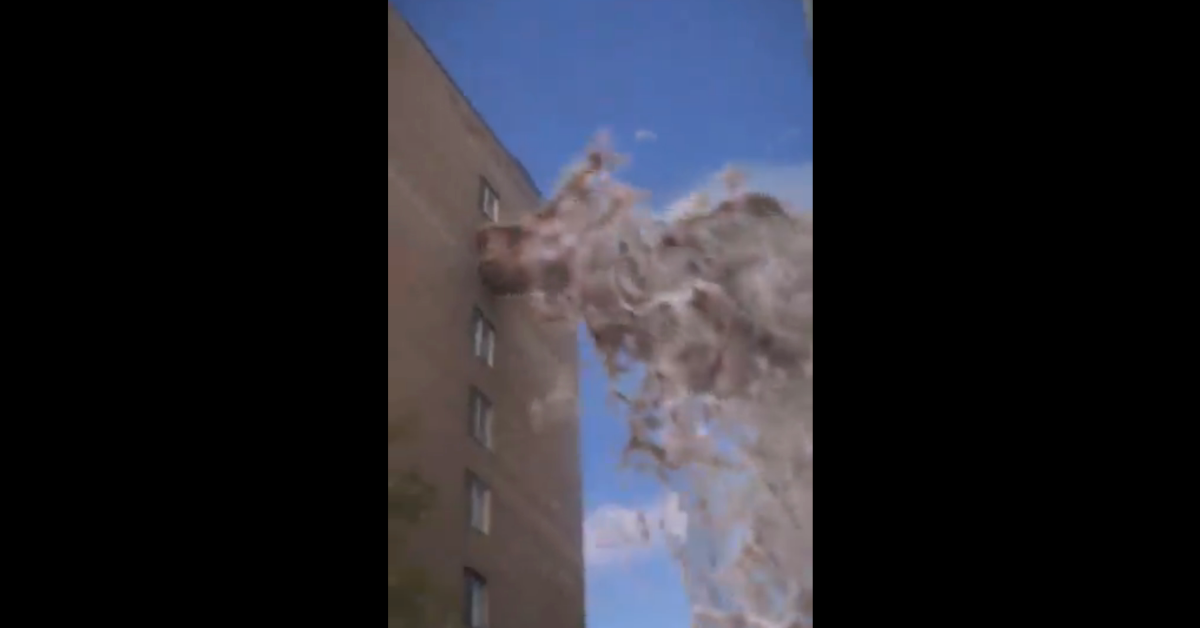 Claim:
A video showing a "Coke and Mentos" experiment triggering a massive explosion in an apartment building was authentic.
Rating:

In late 2020, internet users on various platforms enjoyed a short video that, at first glance, appeared to show a series of spectacular escalations in what is known as "the Mentos effect" — the explosive effect of combining the hard candy shell of Mentos with a carbonated drink (typically Coke), and a real phenomenon we have previously examined in greater detail.

In the 2020 video, an upturned Coke bottle, with several Mentos attached to it, is placed in a toilet bowl. The bottle shoots up, flies around the bathroom, and what can only be described as an eruption ensues in the toilet bowl, sending gallons of waste water into an apartment building. Then, a geyser of toilet water smashes through the apartment window and falls several stories to the ground below.

Widely shared versions of the video were posted to Facebook and Twitter in October and December 2020. However, the footage did not document a freak, catastrophic chain of explosions set in motion by "the Mentos effect." Rather, it was an impressive feat of digital manipulation and visual effects by a Russian artist and animator who uses the moniker "Patiffonka":

Patiffonka originally uploaded the video on the same day, Oct. 27, 2020, to his accounts on Twitter, Reddit, YouTube and Instagram, the latter of which lists his name as "Sergey Kulishov." On Patreon, Patiffonka describes his work as follows: "I create funny animations and videos. Usually they are all about explosions and all kinds of madness."

On Reddit, he could be found conversing with other users about how he created the video using visual effects and animation software including Houdini and RealFlow. He also provided a link to the original footage he used for the first few seconds of the video (the Coke bottle surging upwards from the toilet bowl), which he pointed out was the only piece of footage in his creation that he did not animate himself.

These "under-the-hood" explanations, combined with the provision of raw source footage, Patiffonka's track record of creating similar animations and visual effects, and the fact that he uploaded the video to at least four platforms at the same time, all point toward him as the original creator of the video, and clearly demonstrate that the "Mentos effect" masterpiece, while highly impressive and thoroughly enjoyable to watch, was indeed a fake.