"Ein Volk, Ein Reich, Ein Getrank" ("One People, One Realm, One Drink") read a supposed Nazi-era Coca-Cola ad shared widely in 2021. But was it "the real thing"? 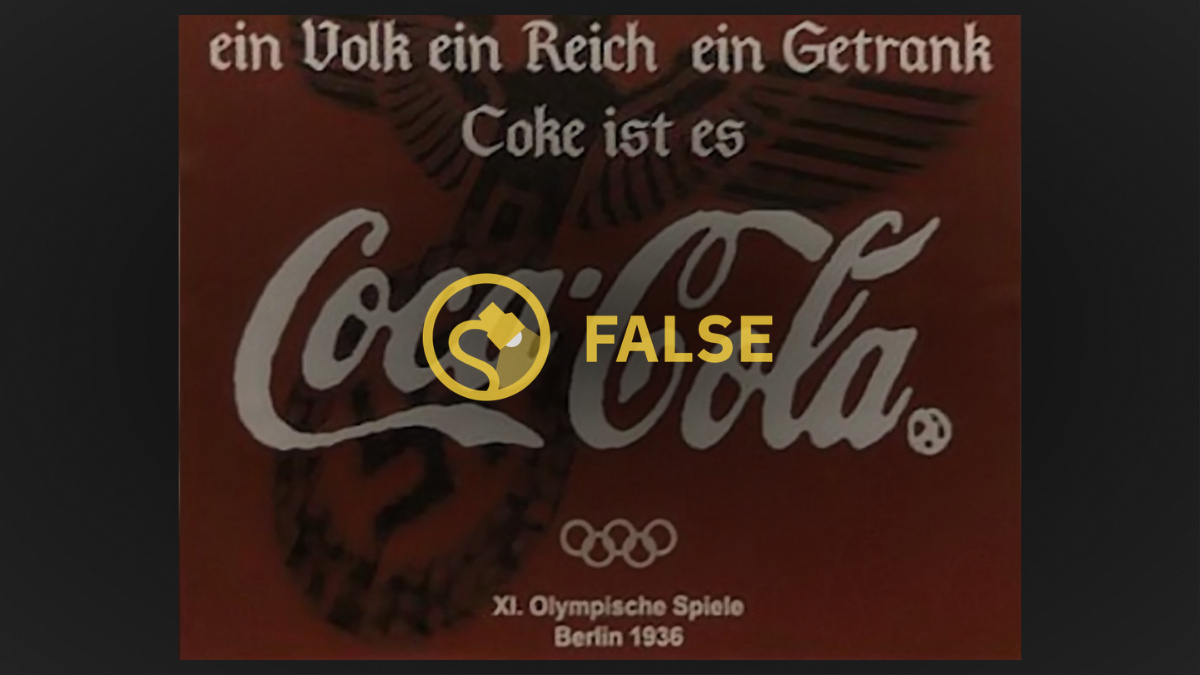 Claim:
A design containing the phrase "Coke ist es" ("Coke is it") was an authentic, Nazi-era advertisement for Coca-Cola.
Rating:

In 2021, internet users enthusiastically shared memes containing what appeared to be a Nazi-era Coca-Cola advertisement bearing the slogan "Ein Volk, Ein Reich, Ein Getrank — Coke Ist Es" ("One People, One Realm, One Drink — Coke Is It.") In some cases, the "Nazi ad" was juxtaposed with a photograph of a Coke bottle that expressed support for LGBTQ rights, which featured an LGBTQ rainbow motif, and the slogan "Love is Love," along with a photograph of former U.S. President Donald Trump and a subtitle that read "I was a businessman...doing business":

The message conveyed by the latter version of the meme appeared to be that the 21st century rhetoric of inclusion and diversity, popular among many large corporations like Coca-Cola, especially during LGBTQ Pride Month, should be viewed skeptically as an effort to appeal to customers, rather than a sincere expression of those principles, and that large corporations have always embraced whichever movements they view as most likely to increase their profits. This point was supposedly illustrated by the Nazi-era Coke ad. As one Twitter user wrote, "Capitalism has no heart or soul. Only profits."

The validity of that broader argument is beyond the scope of this fact check. However, we can say for certain that the "Nazi Coke ad" contained in the memes was not an authentic Nazi-era advertisement. As such, we are issuing a rating of "False."

The words at the top of the ad are a pastiche of the real Nazi slogan "Ein Volk, Ein Reich, Ein Führer" ("One People, One Realm, One Leader.") However, "Coke ist es" is a transliteration of the Coca-Cola slogan "Coke is it" and the first piece of evidence as to the inauthenticity of the advert.

"Coke is it" has been an iconic commercial slogan over the past several decades, but it was not launched by Coca-Cola until 1982. Therefore, its presence in the "Nazi Coke ad" in question actually establishes that the design could not have originated in that era or specifically in the context of the 1936 Olympics.

Furthermore, the "Coca-Cola" brand name is accompanied by a registered trademark ® symbol. Although the company first trademarked that name in 1893, the ® symbol did not appear with the distinctive brand design until the 1950s, according to Allen Petretti, an expert in Coca-Cola collectibles and antiques.

Together, these two anachronisms constitute satisfactory proof that the design in question could not have originated during the 1930s.

Rather than dating to the 1936 Berlin Olympics, the ad actually originated in an art installation curated in 2004 by the English comedian and activist Mark Thomas and the Welsh artist Tracey Moberly (formerly Tracey Sanders-Wood).

Early in 2004, Thomas and Moberly solicited design entries online with the following brief:

Firstly, to try and recreate the adverts that Coke had in the Nazi era. There are a number of written descriptions of Coke's work and there are places on the web that show the type of ads they used. So using the resources we gather and our imaginations we can try and create the ads Coke used. Secondly, to use photomontage to try and create Coke's images in Nazi Germany. Basically instead of recreating ads we are looking at placing those ads in situ. Thirdly, to do whatever you like around the theme of Coke and the issues that surround the Company. From oils to papier mache all is welcome.

As a result, more than 400 fake ads were included in the "Coca-Cola's Nazi Adverts" exhibit, which was shown in London, Moscow, Ecuador, Venezuela, and Columbia between 2004 and 2006. An early news release for the exhibit made it clear the pieces were parodies and imitations, rather than authentic adverts from that era:

This exhibition is done without the consent of Coca Cola. The works are not the original adverts used by Coke in Nazi Germany, well one or two might be Coke ads but they have been bastardised and willfully changed.

When this fact check was first published, Snopes was not able to find definitive evidence that the "Coke ist es" advert specifically originated in Thomas and Moberly's exhibit.

However, in June 2021, photographer Scott van Looy contacted us to confirm that he had taken a photograph of the fake ad, shown below, as displayed on the walls of The Foundry, a now-defunct London bar and venue once run by Moberly, as part of the initial exhibit. The picture was taken on June 10, 2004, van Looy told Snopes. The fake Nazi Coke advert, as displayed at the Foundry, London, on June 10, 2004. Courtesy of Scott van Looy. https://scottjoycephotography.net/

The rainbow-flag, pro-LGBTQ Coke bottle design shown in many of the same memes in 2021, on the other hand, was authentic. It originated in a "Love is Love" marketing campaign run by Coca-Cola in Hungary, in 2019.