Is This a Picture of Christine Blasey Ford in 1982?

A picture said to be one of a 15-year-old Christine Blasey Ford has been proffered as "evidence" that Brett Kavanaugh did not sexually assault her. 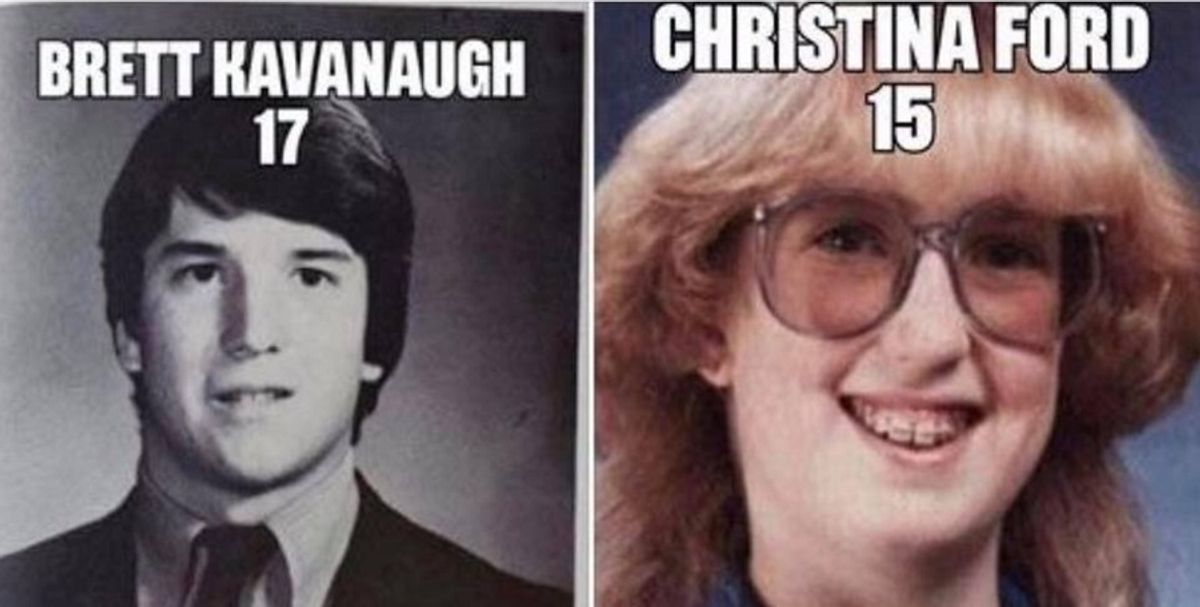 Dr. Christine Blasey Ford, the Palo Alto University professor who testified before Congress in September 2018 that Supreme Court nominee Brett Kavanaugh had sexually assaulted her while they were both in high school in the 1980s, was the focus of a number of baseless and false rumors spread in an attempt to tarnish her credibility.

One of the more disturbing smear campaigns centered an alleged photograph of Ford from 1982 that was shared along with comments insinuating that she was too physically unattractive for a handsome young man such as Brett Kavanaugh to target for sexual assault:

A number of individuals also shared this fake photograph alongside a genuine image of Brett Kavanaugh from his high school yearbook in order to strengthen their flawed argument that "handsome" Brett would never assault "ugly" Ford: This comparison did not a use a real photograph of Christine Blasey Ford, but nonetheless it was widely shared on Twitter, Facebook, internet forums and web sites along with comments claiming that it was "proof" of Kavanaugh's innocence as he would never sexually assault someone who was "ugly":

This is Dr. Ford in 1982. I am going to go ahead and say this proves that she is lying.

I’m pretty sure no one was banging this chick in 1982. #justsaying #christineblaseyford #kavanaugh #metoo

This was Christine Blasey Ford in 1982. There’s NOT enough beer on the planet....

This is Christine Blasey Ford in 1982 , I think she was delusional, " some thing did happen to her ! But not with who she dreamed up !

These pictures are of Christine Blasey Ford the paid accuser and Judge Brett Kavanaugh from 1982, is confirmation of his innocence ...

I don't think Brett would have been 1000 miles close to where Christine Blasey Ford was. What say you all?

This picture was also shared by Lanny Lancaster, the Cabarrus County (North Carolina) GOP chairman, with the caption: “This is the alleged sexual assault victim. Wow.” Lancaster defended his decision to share the photograph to the News Observer, arguing that he was simply trying to show that the media's portrayal of Ford was inaccurate:

“I didn’t say anything. I just said this is her picture. Basically, the media is distorting the facts on this lady. Everything she’s said is made up. She has no evidence whatsoever. I support that theory,” Lancaster said.

Lancaster said he takes issue with how the news media is portraying Ford’s early life.

“The media wants you to think she was a beautiful young lady who was on her way home from the tennis courts ... ” Lancaster said. “I just wanted you to see the real person. I wanted people to see that this is really her.”

The problem with the argument implied here is twofold. First, sexual assaulters targets victims based on factors other than physical appearance. The notion that physical attractiveness of the victim is a primary criterion in such attacks is a myth that perpetuates the harmful notion that it is a woman's fault for being assaulted:

Myth: Only certain kinds of people get raped. It cannot happen to me.

FACT: Rapists act without considering their victim's physical appearance, dress, age, race, gender, or social status. Assailants seek out victims who they perceive to be vulnerable. The Orange County Rape Crisis Center has worked with victims from infancy to ninety-two years of age and from all racial and socioeconomic backgrounds.

FACT: Research has found that the vast majority of rapes are planned. Rape is the responsibility of the rapist alone. Women, children and men of every age, physical type and demeanor are raped. Opportunity is the most important factor determining when a given rapist will rape.

Second, this photograph does not show Christine Blasey Ford, in 1982 or in any other year.

This picture is one of an as-yet unidentified person which has been used for various memes ever since it first appeared on the internet in "Bad Yearbook" and "Bad Family Photo" galleries around 2011. Blasey Ford's name was never attached to this photograph until September 2018, when internet trolls began to claim so without evidence in order to tarnish her credibility.

Here are genuine images of Christine Blasey Ford taken from her 1982 and 1984 yearbooks: