Did Education Secretary Betsy DeVos Register Her Yacht in the Cayman Islands?

Several viral memes made unfounded assumptions based on the complicated inner workings of the DeVos family's business interests. 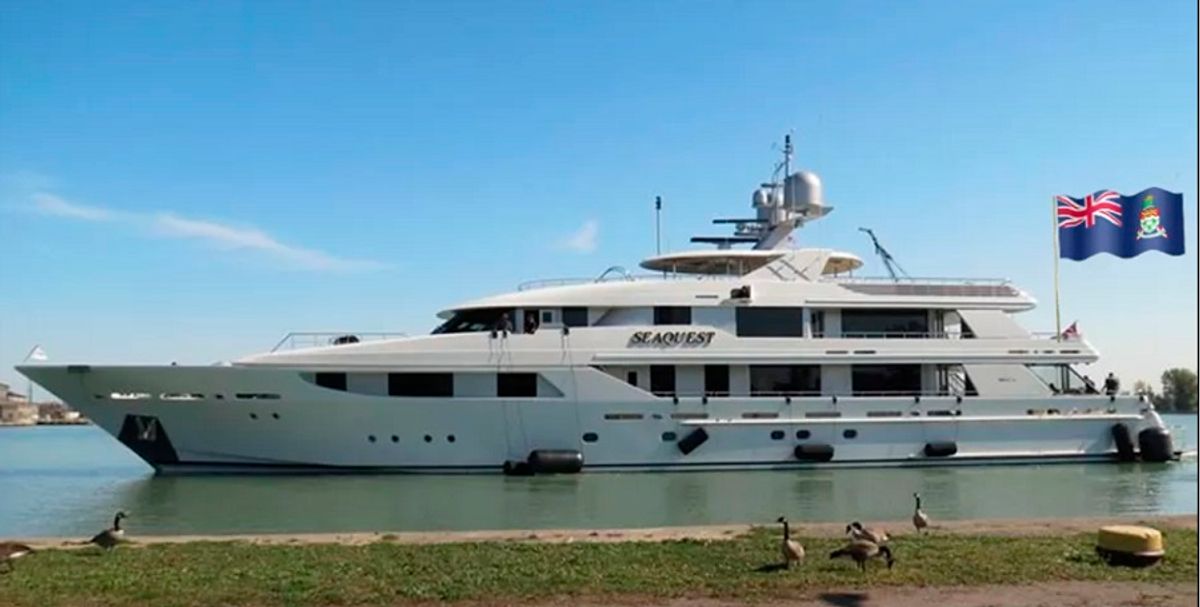 Claim:
Betsy DeVos owns a yacht called Seaquest, which she registered in the Cayman Islands to avoid U.S. taxes.
Rating:

The yacht Seaquest is registered in the Cayman Islands, and it is owned by DeVos' father-in-law via an entity linked to RDV Corporation, a DeVos family management company in which DeVos and her family members are intimately intertwined.

According to a spokesperson for RDV Corporation, Betsy DeVos does not personally own Seaquest, has never held any ownership in it, and has never made any management or registration decisions related to it.

Education Secretary Betsy DeVos has been the subject of intense scrutiny since even before her appointment, both about her qualifications and positions on education policy and also about her (and her family's) financial connections, investments, and donations.

That scrutiny continued in August 2018, when the investigative web site Capital & Main published a report detailing the registration and management of a yacht associated with the DeVos family:

When someone untied a yacht owned by U.S. Secretary of Education Betsy DeVos’s family, Fox News portrayed the episode as an illustration of uncouth anti-Trump sentiment. The yacht’s foreign flag, though, was an illustration of how an allegedly “America First” administration is chock-full of moguls who have eagerly stashed their wealth offshore -- as long as doing so means avoiding taxes, regulations, transparency requirements and domestic employment laws.

... When her family’s 164-foot yacht was untied from a Huron, Ohio dock, it was flying a flag of the Cayman Islands, where VesselTracker says the yacht is registered. According to federal records, the yacht is owned by RDV International Marine, which is an affiliate of the company that controls the DeVos family’s fortune.

... When buying a vessel or cruising in U.S. waters, American yacht owners like the DeVoses could face state sales or use taxes. However, registering a yacht in a locale like the Caymans — under what has come to be known as a “flag of convenience” — allows those American yacht owners to effectively characterize themselves as foreigners for tax purposes, thereby avoiding the obligation of paying the standard sales and use levies, while enjoying police and Coast Guard services during times their vessels are untied.

The report, which was also published by Newsweek, prompted several memes from left-wing and progressive social media accounts, such as the following Occupy Democrats post: "The Other 98%" posted a similar meme of their own: On Facebook, the progressive "Americans for Tax Fairness" coalition posted a meme which claimed that the Cayman Islands registration applied to all the yachts owned by the DeVos family: The yacht in question, Seaquest, is registered in the Cayman Islands, an arrangement that has potentially allowed its owner(s) to avoid paying taxes that they would otherwise face when travelling in the United States. However, it cannot be affirmed with certainty that this was the motivation behind the overseas registration.

Furthermore, Betsy DeVos is not the owner of the vessel (although members of her family are), and a spokesperson for the DeVos family's main management company told us that neither she nor her husband Dick was responsible for the decision to register the yacht in the Cayman Islands.

Seaquest is a 164-foot long (50-meter) yacht built by Westport and registered in George Town, the capital of the Cayman Islands. It is owned and managed by R.D.V. International Marine, according to the web site VesselTracker.com. The country's Shipping Registry confirmed to us that Seaquest's official Cayman Island's vessel number is 740641.

R.D.V. International Marine is an entity of R.D.V. Corporation, the Michigan-registered management company which oversees the substantial financial investments and business interests of the DeVos family, headed by 92-year-old Richard DeVos, a multi-billionaire businessman and one of the co-founders of the "multi-level marketing" giant Amway.

Dick DeVos (Richard DeVos Jr.), the husband of Betsy DeVos, is a director of R.D.V. Corporation, as is the couple's daughter Elisabeth ("Elissa") Lowery, Dick's sister Suzanne ("Cheri") DeVos, and his brothers Doug and Dan and their wives Maria and Pamella. Betsy DeVos was herself a company director until November 2016, according to her financial disclosure.

However, Chief Operating Officer of the Windquest Group, Greg McNeilly, told us that Dick and Betsy DeVos are not the owners of Seaquest. (The Windquest Group is a private investment firm founded by Dick DeVos, who is its president. Betsy DeVos was a director at Windquest until November 2016.)

This was corroborated by Nick Wasmiller, a spokesperson for R.D.V. Corporation, who told us by email that Seaquest is owned (through R.D.V. International Marine) by Richard DeVos, who previously owned it in conjunction with his wife Helen prior to her death in October 2017: "Dick and Betsy DeVos do not own Seaquest and have never held ownership in the watercraft ... Dick and Betsy DeVos had no role in the registration of Seaquest nor the management of any subsequent efforts to maintain that registration."

The yacht Seaquest is, and has always been, owned by Betsy DeVos' father-in-law, according to spokespersons for two DeVos family companies, and Betsy herself has never made any management or registration decisions about it, according to a spokesperson for R.D.V. Corporation.

A 2017 investigation by the Wall Street Journal outlined how the extended DeVos family structures and manages their investments, business interests, and assets, which include nine vessels other than Seaquest: Blue Sky, Quantum Racing, Delta Victor, Reflection, Attitude, Sterling, Windquest, Zorro, and De Lus.

In response to our question, Wasmiller confirmed that these other nine vessels are "owned by various DeVos family entities" but said they are "registered in the United States."

We checked the U.S. Coast Guard's Vessel Documentation Center database, and found that the nine DeVos family-related vessels listed by the Wall Street Journal are indeed all registered to ports in the United States, specifically in Michigan, Delaware, and Florida.

While Betsy DeVos does not personally own or manage Seaquest, it is possible that its registration in the Cayman Islands, as opposed to the United States, might have allowed its owner, Richard DeVos (via RDV International Marine) to avoid incurring certain taxes (though this is not certain), as Capital & Main reported:

If the vessel were registered in, say, Grand Rapids, Michigan — the state where RDV is located and that has in the past made an effort to compel yacht owners to pay use taxes — the SeaQuest would likely be subject to Michigan’s six percent use tax. That would require the DeVos empire to cough up about $2.4 million ...

The figure of $2.4 million represents six percent of $40 million, which is the estimated value given to Seaquest in several news reports, including Capital & Main's investigation. The source of that evaluation is not clear, with many articles describing the yacht as being "reportedly valued at $40 million," without providing any attribution for that number.

We found one online broker selling a brand-new 164-foot Westport yacht (like Seaquest) for $42.5 million, and another 2013 listing for a similar vessel which presented a sale price of $34 million. Seaquest was built in 2008, so it's possible its purchase price was lower than $40 million.

Furthermore, it's unclear whether Seaquest would actually incur a tax liability even if it were registered in Michigan. What's in question here is a type of taxation called "use tax," which applies to tangible products and entities that are brought into and used or consumed in a particular jurisdiction (in this case the state of Michigan), in circumstances where sales tax does not apply.

There is levied upon and there shall be collected from every person in this state a specific tax, including both the local community stabilization share and the state share, for the privilege of using, storing, or consuming tangible personal property in this state at a total combined rate equal to 6% of the price of the property or services ...

So, in principle at least, if you own a yacht that is habitually docked or sailed in Michigan, that is likely to be regarded as storage or usage, and you would owe the state of Michigan use tax of six percent of the price of the yacht.

We don't know whether Richard DeVos was a resident of Michigan at the time he bought Seaquest in 2008, and we don't know how much time elapsed between his purchase of the yacht and its arrival in the state. Therefore, even if Seaquest were registered in Michigan and not the Cayman Islands, it's not certain that vessel would be subject to use tax, although this is certainly a possibility.

Wasmiller, on behalf of R.D.V. Corporation, provided an alternative explanation for the decision to register Seaquest in the Cayman Islands:

Non-commercial watercraft exceeding 100 feet, such as Seaquest, are commonly registered in the Cayman Islands. The country’s strict safety, manning and operation standards for non-commercial watercraft are widely recognized in international waters and closely align with requirements commonly encountered during global travel. As a result, registration in the Cayman Islands provides for the most efficient entrance and exit of various jurisdictions.

In boating terms, it’s a widely recognized flag -- a significant benefit when traveling internationally, thus the registration of Seaquest there. Also of note, it is the policy of RDV International Marine that all employees aboard Seaquest are eligible to work in the United States, as the boat does periodically enter U.S. waterways.

The claims contained in the viral memes we listed are based on several assumptions, made without sufficient evidence, and contradicted by spokespersons for Dick and Betsy DeVos and Richard DeVos.

However, even though Betsy DeVos is a former director of RDV Corporation, and her family members are closely intertwined with the company, this does not mean that every asset owned by every entity of RDV Corporation is also owned (even in part) by every member of the DeVos family. It is a family company, but it is not a co-op.

This logical and evidentiary leap is also directly contradicted by spokespersons for two DeVos-related companies, who stated on the record that Richard DeVos owns Seaquest, and that neither Betsy nor Dick DeVos have ever owned even part of it nor have ever made decisions about its management and registration.

And finally, there is an assumption (albeit a more reasonable one) involved in the claim that registering Seaquest in the Cayman Islands allows its owner(s) to avoid paying taxes in the United States. Michigan state law allows for certain exemptions from the obligation to pay "use tax," and it cannot be said with certainty that Richard DeVos, the owner of Seaquest, did not meet the criteria for those exemptions.

The claim that the tax obligation allegedly being avoided amounts to $2.4 million is also based on an assumption about the price of the yacht itself, which is not known for certain.