The nomination of Betsy DeVos as secretary of education inspired an Internet meme detailing her alleged lack of qualifications for the job. 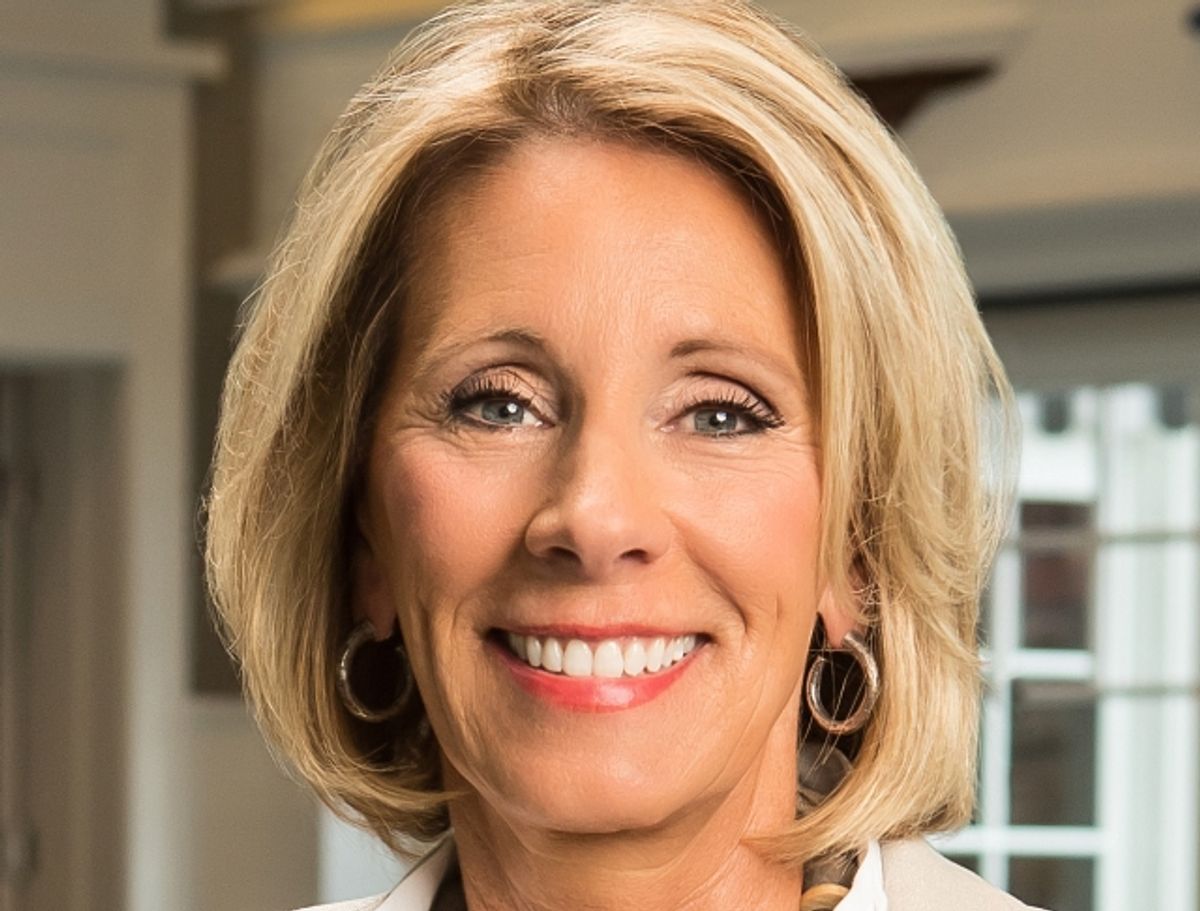 Claim:
Donald Trump's nominee for Secretary of Education, billionaire Betsy DeVos, has no education degree or teaching experience, has never attended a public school or sent her children to one, and supports the funding of for-profit Christian schools over public ones; she got the job because she donated $9.5 million to Trump's campaign.
Rating:

On 23 November 2016, President-elect Donald Trump announced his nominee for the position of Secretary of Education, 58-year-old Betsy DeVos, who is described by the Washington Post as a "Michigan billionaire and conservative activist."

DeVos is a former chairperson of the Michigan Republican Party. Her husband, Amway heir Dick DeVos Jr., ran as the Republican candidate for governor of the state in 2006. She currently chairs the American Federation for Children, an organization that promotes "school choice" in the form of education vouchers, scholarship tax credits, and the like.

“I am honored to accept this responsibility to work with the President-elect on his vision to make American education great again,” DeVos said:

The status quo in education is not acceptable. Together, we can work to make transformational change that ensures every student in America has the opportunity to fulfill his or her highest potential.

The deeply partisan Internet meme displayed above sarcastically presents DeVos' "qualifications" for the job as a list of negatives, claiming, for example, that she doesn't believe in public education, never attended a public school in her life, and has never worked in a school setting. We'll examine the veracity of each claim individually:

True. DeVos (born Elizabeth Prince) is the daughter of the late Edgar Prince, a wealthy industrialist, sister of Erik Prince, founder of Blackwater USA, and wife of Dick DeVos, entrepreneur and heir to the fortune of Amway founder Richard DeVos, valued at about $6 billion. With her husband, she co-owns the Windquest Group, a technology investment firm.

False. Though DeVos and family are longtime contributors to the Republican Party, she did not support Donald Trump's candidacy in the 2016 election.

True. DeVos does have a degree, just not in education; she graduated from Calvin College in Grand Rapids, Michigan with a bachelor's degree in business administration and political science. She wouldn't be the first Secretary of Education to take office without a degree in the subject, however. Margaret Spellings, George W. Bush's education secretary from 2005 to 2009, had a degree in political science. Bill Clinton's education secretary, Richard W. Riley, had a law degree.

No experience working in a school environment?

True. Apart from serving as chairperson of the investment business she owns with her husband, DeVos' work experience has revolved around philanthropy and political advocacy, though much of that pertained to educational issues. Again, however, DeVos wouldn't be the first education secretary to take office without having worked in schools.

Never put her own children in public school?

True. (According to Associated Press, which reported that none of Betsy and Rick DeVos' four children attended public schools.)

Does not believe in or support public education?

Mixture. Based on her statements, DeVos advocates on behalf of "school choice," meaning she believes all families should have access to more educational options than just public schools. That doesn't, on the face of it, preclude support for public education, though DeVos' critics would argue that redirecting public monies to private schools via vouchers or other schemes is tantamount to defunding the public school system. According to a DeVos family spokesperson interviewed by The Detroit News, members of the family have "given millions of dollars" to the Grand Rapids Public Schools over the years.

Undetermined. We haven't unearthed any public statements by her to that effect, although a conservative think tank with which her family is aligned has expressed that view.

True. At least, insofar as DeVos favors the proliferation of charter schools, some of which are organized as for-profit businesses.

Undetermined. Through their nonprofit organization, the Dick and Betsy DeVos Family Foundation, Betsy and her husband have given tens of millions of dollars to a great many schools and organizations, some of which are identified as "Christian." For 12 years running, for example, the foundation donated between $200,000 and $300,000 annually to Potter's House, a nonprofit "Christ-centered" elementary school serving underprivileged children in Grand Rapids, Michigan. But they have also contributed large amounts to the Van Andel Institute (VAI), scientific research and education facility, and the John F. Kennedy Center for the Performing Arts, among many others.

Doggedly advocates funneling money out of public education and into for-profit, Christian-based education?

Partly true. As noted above, DeVos has long been an advocate for "school choice," which does involve, to some extent, funneling money away from public schools and toward private educational options, including for-profit and Christian-based schools.

On 7 February 2017, the Senate approved Betsy DeVos as Secretary of Education, with Vice President Mike Pence breaking a tie vote.