Bethany Christian Services, which has links to the family of Education Secretary Betsy DeVos, has fostered out at least 81 children taken from their parents at the U.S. border. 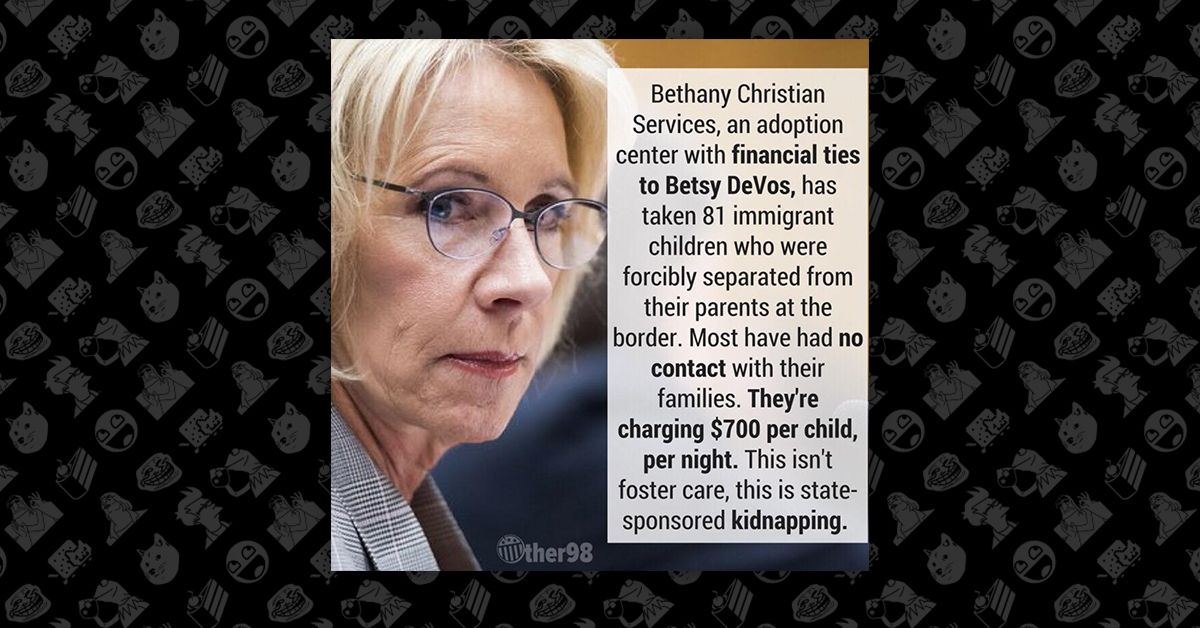 The Trump administration's "zero tolerance" immigration policy prompted widespread public outrage in the spring and summer of 2018, and the separation of thousands of children from their parents at the United States' border with Mexico has given rise to a potential future crisis as lawyers and advocates express grave concerns that many separated families may never be reunited.

Among the approaches taken by the federal government has been to engage foster care providers throughout the country to house children whose parents were forced or coerced into giving them up at the international border.

At the end of June 2018, one foster care provider in particular came under intense scrutiny, and was the subject of speculation over its operations, as well as its links to the Trump administration. On 24 June, the left-wing Facebook page "The Other 98%" posted a widely-shared meme about Bethany Christian Services:

Bethany Christian Services, an adoption center with financial ties to [Education Secretary] Betsy DeVos, has taken 81 immigrant children who were forcibly separated from their parents at the border. Most have had no contact with their families. They're charging $700 per child per night. This isn't foster care, this is state-sponsored kidnapping. There were more detailed claims about the links between the DeVos family and Bethany, with The Other 98% writing: "Betsy DeVos donated $300,000 to the group and her husband's cousin Brian DeVos was a Vice President."

The links between the extended DeVos family and Bethany are undeniable. Tax filings archived by ProPublica show that between 2001 and 2015, the Dick and Betsy DeVos Foundation (the philanthropic organization run by DeVos and her husband) gave $343,000 in grants to Bethany Christian Services.

Between 2012 and 2015, Bethany received $750,000 in grants from the Richard and Helen DeVos Foundation, which is run by the Education Secretary's father-in-law, the billionaire founder of Amway Richard DeVos, and his wife Helen.

Furthermore, Brian DeVos -- a cousin of Betsy DeVos's husband Dick -- was the Senior Vice President for Child and Family Services at Bethany as recently as 2015, and Maria DeVos -- who is married to Dick DeVos's brother Doug -- has served on the board of Bethany.

The DeVos family has for years been a wealthy and influential force in Christian conservatism and Republican politics in their home state of Michigan and beyond. While Betsy and Dick DeVos did oversee the donation of $343,000 in grants to Bethany between 2001 and 2015, it's worth noting that they also donated millions of dollars to dozens of other recipients, many of them Christian-oriented educational and childcare organizations.

Furthermore, Betsy DeVos is not an owner of Bethany Christian Services, and therefore does not profit financially from any of the organization's activities, including its government contract for foster services.

Bethany Christian Services is a prominent non-profit provider of adoption and foster services, as well as pregnancy counselling. As its name suggests, the organization is led by devout Christians, and states that part of its mission is to "demonstrate the love and compassion of Jesus Christ by protecting children, empowering youth, and strengthening families through quality social services."

The organization and its leadership are vocal pro-life opponents of abortion access, and advocates of alternatives to abortion.

Bethany has faced criticism for its religiously-motivated refusal to place children with LGBT adoptive parents, and in March 2018, the city of Philadelphia terminated a foster care contract it had had with Bethany and Catholic Social Services, due to their prohibition on same-sex adoption.

According to the organization, as of 23 June 2018 it had provided foster services to 81 children separated from their parents as part of the Trump administration's "zero tolerance" immigration policy.

Dona Abbott, Bethany's head of refugee services, told West Michigan Fox affiliate WXMI that the organization was opposed to the policy, but had contracted with the federal government to provide foster services for the children.

...These children will be separated. That's a decision that's been made -- it's been announced, the zero tolerance policy -- and we believe children should be in family.

Speaking to Grand Rapids, Michigan ABC affiliate WZZM, Abbott expressed doubt about the prospect of reuniting all 81 children with their families, citing the chaos caused by the zero tolerance policy.

Prior to this, we had a fairly organized, kind of systemic way of [ensuring] children got back to family. Now, we're just not certain. You have parents deported separate from their children, and being deported to unsafe situations. So it would be easy for a parent to get lost in that situation.

The organization has existing contracts with the Department of Health and Human Services to provide refugee resettlement services, as well as more overtly Christian initiatives such as abstinence-only sex education, and "healthy marriage promotion."

We sent Bethany Christian Services a series of detailed questions, and received a response to some of them after this article was published.

A spokesperson did not give us the number of migrant children who have been taken into Bethany's care since the implementation of the "zero tolerance" policy, telling us in an email that that number "is constantly changing." They declined to offer even a rough breakdown of the locations where separated children had been fostered out, citing "the safety of the children."

When asked about the fees Bethany was charging to the federal government for its services, the spokesperson did not provide any figures, but wrote:

Bethany does receive funding to support our work with unaccompanied and separated children based on the services these children need, including a clinician, case manager, trauma-informed teacher, and foster family to provide trauma support. This is critical because these children have been traumatically separated from their families and are at significant risk for long-term harm.

Additionally, the funds are used to provide essential supplies to the child during their stay with the foster family, including food, clothing, and other materials, as needed. The specific amount of funding varies based on circumstances, but the care provided by Bethany is significantly more affordable than placing children in detention facilities.

We asked Bethany whether there was any provision in its contract with the government which would explicitly allow or prohibit it from making any of the separated children available for adoption, at a later date. The spokesperson did not answer that specific question, but did insist:

These children will not be adopted. These children have families, and we will continue to pursue reunification with their families.

We also sent similar detailed questions to the U.S. Department of Health and Human Services, including whether it was keeping a record of the identity and whereabouts of each child contracted out into foster care, and each child's parents, as well as requesting some very basic facts on the number of separated children placed in foster care, and the names of the organizations being paid for it. We did not receive a response to any of our questions.

Kasprak, Alex.  "Does the United States Have a Plan to Reunite Children Separated From Parents at the Border?"   Snopes.com.  19 June 2018.

Updated [11 July 2018]: Added clarification that Betsy DeVos does not own Bethany Christian Services, nor profit financially from its activities.

Immigration the other 98%
Read More