No Evidence Mitch McConnell Was Court-Martialed for 'Sodomy' in Army

The rumor was spread via "copypasta," or text that has spread by internet users copy-and-pasting it into posts. 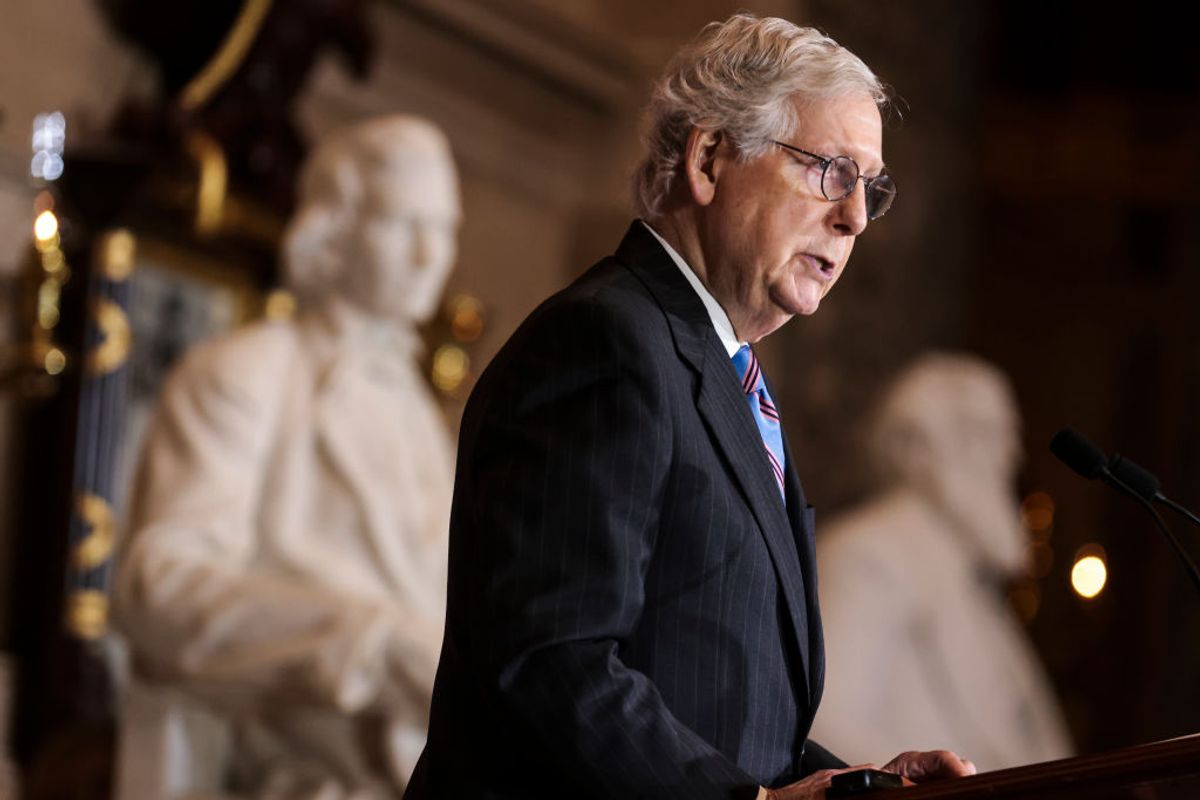 It's a lurid rumor that lacks evidence, but like similarly unfounded rumors, it has been stubbornly circulating on the internet for years. Without evidence, internet posts claim that U.S. Sen. Mitch McConnell, R-Kentucky, was court-martialed for "sodomy" after a brief stint in the Army Reserve in 1967.

The rumor surfaced in 2013 on a blog hosted by the liberal political site Daily Kos, although the earliest iteration of it we could find was posted in 2004 on a blog called The Left Coaster. For as many years, readers have been asking Snopes to look into it.

We have found no evidence to support the claim.

The rumor relies entirely on supposition drawn from thin sourcing. To believe it, one must rely on a logical fallacy sometimes referred to as an "argument from ignorance," namely, that something is true simply because it hasn't been proven false.

What's true is that McConnell served in the U.S. Army Reserve in 1967. He received an honorable discharge for an eye condition called optic neuritis, or inflammation of the optic nerve that can compromise vision.

In October 2008, McConnell allowed a reporter from the Lexington Herald Leader to view his military service record. As the newspaper noted, the context for that was that his brief stint in the military had become a campaign issue. McConnell was denying accusations from political rivals that an influential politician pulled strings to keep him off the front lines during the Vietnam War.

Based on the records provided for viewing by McConnell's office and documents obtained from the National Archives, the Herald Leader described a "bare outline" from the documents that detailed McConnell's military service:

McConnell was a 25-year-old University of Kentucky law student with political aspirations in spring 1967, during the Vietnam War.

As his graduation neared, making him eligible for the draft, McConnell secured a coveted post in the U.S. Army Reserve, which President Lyndon Johnson kept out of combat for most of his administration. McConnell enlisted March 21, 1967, and then returned to UK to finish law school.

Private McConnell spent little time in uniform. He won a discharge from the Reserve after five weeks of active duty. He trained at Fort Knox from July 9 to Aug. 15, 1967.

McConnell's discharge came five days after U.S. Sen. John Sherman Cooper, R-Ky., for whom he had worked as an intern, sent a letter to the two-star general in command of Fort Knox.
Cooper told Maj. Gen. A.D. Surles that McConnell expected to be released on a medical discharge because of optic neuritis, a painful eye condition that is treated by steroids. The man's papers seemed to be stalled somewhere on base and needed to be forwarded, Cooper wrote.

"Mitchell anxious to clear post in order to enroll NYU," the senator told the general on Aug. 10, 1967. "Please advise when final action can be expected."

Actually, McConnell never attended New York University. After his discharge, he did a short stint at a local law firm, and then returned to Washington to join the office of Sen. Marlow Cook, R-Ky., where he worked for the next few years.

From the Herald Leader story, it appears that the "controversy" in the late 2000s surrounding McConnell's time in the military had to do with questions raised by political opponents about whether he received favorable treatment due to his political connections.

So where did the sodomy rumor arise? It came from a piece of copypasta, or text that goes viral by way of internet users copying and pasting it into posts. This copypasta has been circulating on the internet for years. It is vague, citing an alleged anecdote relayed by a Lexington postal clerk named Alan Lynch. The copypasta story goes as follows:

In the summer of 1967 Lynch reported for his summer active duty in the 100th Training Unit Army Reserve. The Unit did their summer active duty at Ft. Jackson, South Carolina. Lynch worked for S-1, the administrative arm of any army unit. Lynch worked for a Major, who was the assistant Adjutant and new to the unit. During his active duty in August of 1967 Lynch remembers coming into the office and noticed that the Major was upset. He asked him what was going on and the Major told him the following:

A new member of the 100th Army Reserve Unit in Basic Training at Ft. Knox was arrested in the barracks for sodomy. The guy is getting out of the military and the excuse will be due to an illness, an eye disorder. The Major then told a joke about it saying, "I guess the guy couldn't see the difference between guys and girls."

Lynch asked him how this guy could accomplish this and get a release from the army. The Major told him that the soldier had served as an intern to Senator John Sherman Cooper and Senator Cooper called the Commanding General of Ft. Knox to arrange the discharge.

At the time the Major told Lynch the name of the soldier but the name didn't stick to his brain. Lynch said frankly it was not important at the time because the name McConnell meant nothing to him. It was not until the issue was raised in McConnell's senate race of 1990 that he remembered the incident. Lynch provided the information to reporters with the Courier Journal and Herald Leader but they did nothing with it because they didn't have any real evidence. They only have the story of Lynch.

McConnell has been able to brush this whole thing off as a tempest in a teapot.

It is unclear to Snopes whether "Alan Lynch" is a real person. It is also impossible to verify whether the story he allegedly relayed is accurate, since the name of the major isn't given. Furthermore, it's notable that if he does exist and if there is any accuracy to the story, Lynch didn't remember the name of the person allegedly arrested for sodomy, then somehow concluded it was McConnell when the latter rose to prominence.

Key aspects of the story, aside from its vagueness, do not line up. For example, the claim that McConnell was arrested and court-martialed contradicts the fact he received an honorable discharge. Honorable discharge aside, it seems unrealistic that a court martial would be handed down so quickly — McConnell was only on active duty for about five weeks, which seems like a rather quick turn-around time for an arrest, investigation, trial, and conviction to occur.

In sum, there is no evidence for the rumor that McConnell was court-martialed in 1967 for sodomy.

Updated to note older military services records are maintained by the National Archives.