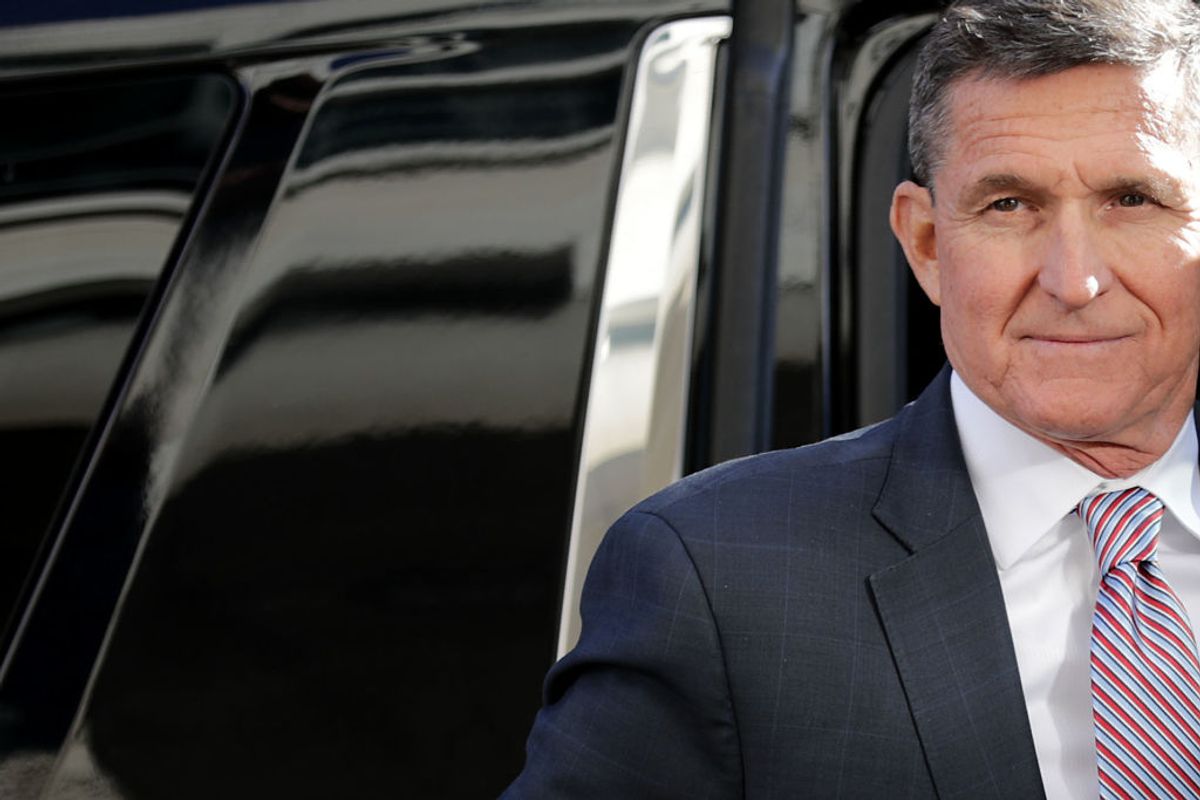 Controversial pro-Trump attorney Lin Wood caused consternation among some QAnon followers over the Thanksgiving holiday weekend, when he posted evidence online that appeared to show that retired U.S. Army Lieutenant General Michael Flynn — a leading public supporter of the sprawling, baseless conspiracy theory — privately regarded it as "total nonsense" and even a deliberate CIA plot to discredit supporters of former President Donald Trump.

In Telegram posts on Nov. 27, Wood characterized Flynn as a "wolf in sheep's clothing" who had "played" QAnon supporters. In what appeared to be a Nov. 3 text message exchange between the two men, Flynn appeared to write, of QAnon: "I have always believe[d] it is a set up and a disinformation campaign to make people look like a bunch of kooks."

The same text message, purportedly written by Flynn, included a link to a Nov. 2 column in which the notorious right-wing commentator Hal Turner described QAnon as "bullshit," and said its most loyal adherents had been "treated like garbage and made to look like a fool in front of the entire world."

Later, Wood posted a 16-minute audio recording of what appeared to be a phone conversation between himself and Flynn. In it, Flynn appears to describe QAnon as "total nonsense" and a "disinformation campaign" created by "the Left" or the CIA. In an email, Wood confirmed for Snopes that he himself had personally published those Nov. 27 posts.

Snopes has not yet been able to verify the authenticity of the text message screenshots or audio recording, and Flynn's attorney Sidney Powell did not respond to a list of questions in time for publication. Although not directly relevant the Nov. 27 audio file, Wood has recently published recordings of other phone calls, which have been verified as authentic.

Flynn was an early Trump supporter who briefly served as his national security advisor before he was forced to resign in February 2017, when it emerged he had misled Vice President Mike Pence about his conversations with Russian Ambassador Sergey Kislyak. In December 2017, Flynn pleaded guilty to lying to the FBI about those contacts, but Trump later pardoned him before leaving office.

Perceived as a victim of "deep state" persecution and corruption, Flynn had been regarded as something of a hero among QAnon followers, and has embraced the language and symbolism of that movement. The possibility that Flynn had, in reality, "always believed" QAnon was "total nonsense," has not gone down well among some adherents.

"QAnon John," an influential promoter of the conspiracy theories, who had lavished praise upon Flynn as recently as August, appeared to have broken from the former general, writing "I stand with Lin" and "It's become clear to me that things may not be as they once seemed...Some of the loyalty and allegiance I had for years is now tarnished."

Similarly, David Clements, a prominent supporter of debunked conspiracy theories about the role of electoral fraud in President Joe Biden's 2020 win, wrote on Telegram: "I recognize great pain is being experienced as new revelations come to pass. I am as heartbroken as you are at the division.  No one likes being deceived.  And no one likes being the instrument of someone else's deception."

Previously, Clements had declared his love and admiration for Flynn.

'I'm Tired of These QAnon People' Attorneys L. Lin Wood (C) and Mark Stephen (L) speak to the media about their client, British rescue diver Vernon Unsworth (rear), as they arrive at US District Court on December 3, 2019 in Los Angeles, California. (Photo by Apu Gomes/Getty Images)

As well as sending shockwaves around the QAnon movement, the apparent Flynn phone call highlights the divisions and infighting that have beset the movement in the wake of a series of bitter losses and disillusionments: the defeat of Trump in 2020; the failure of much-vaunted efforts to overturn Biden's victory; Trump's failure to get himself reinstated to the presidency by Aug. 13, 2021; the subsequent failure of hyperpartisan election audits in various jurisdictions; and most recently, the failure of the long-deceased John F. Kennedy Jr. to materialize in Dallas, Texas, prompting Trump's return to the White House.

Wood gained national prominence in the febrile months after Trump's defeat, and became something of a star in the broader campaign to "stop the steal" — litigating on behalf of Trump in several states. However, the ultimate failure of those dubious legal efforts, along with Wood's promotion of increasingly bizarre conspiracy theories, and criticism from his former client, the acquitted Kenosha murder suspect Kyle Rittenhouse, have seen his star wane.

In the call, which appears to have been recorded on Nov. 2, Wood appears to air a number of grievances, in particular surrounding Vernon Jones — a long-standing Georgia Democrat who switched to the Republican party in 2020, emerging as a prominent Black supporter of Trump, and speaking at the Jan. 6, 2021, rally in Washington, D.C., which preceded the attack on the U.S. Capitol.

In the purported phone call, Wood complains to Flynn that his erstwhile ally failed to speak out in his defense when Jones publicly criticized him: "If somebody had called you [Flynn] un-American and a racist, I'd whip their ass. I certainly wouldn't endorse them for high office."

After further complaining to Flynn about his financial woes, Wood addresses the recent online in-fighting among "patriots" and "truth-seekers," declaring "I'm tired of these QAnon people attacking me." At that point, and without requiring too much invitation, Flynn appears to disavow the movement in no uncertain terms, saying:

There's actually a very interesting article today, out, that was sent to me — I'll send it to you — about how the QAnon movement has failed, and all that. But I find it, you know, total nonsense, and I think it's a disinformation campaign created by the Left, and the types of people that can create something like that are the kind of people that we train for certain — you know, with certain skills, in the CIA. So I wouldn't be surprised if that's what it was.

In a Telegram post on Nov. 27, Wood appeared to extend an olive branch to several erstwhile allies and fellow travelers whom he had criticized and questioned in recent days — Flynn and his brother Joe; pro-Trump attorney Sidney Powell; and businessman Patrick Byrne. Wood wrote:

I am aware that my documented information relating to Mike Flynn, Joe Flynn, Sidney Powell, and Patrick Burn [sic] has caused consternation among the ranks of the Patriots.

I have reached out by documented texts to both Mike and Sidney several times to discuss this situation with them over the last few weeks. I have had no meaningful response to date.

Without question, the division presents a challenging situation at a critical time period in our nation’s history.  I hereby formally invite Mike, Joe, Sidney, and Patrick to Tomotley for a face-to-face meeting so that we can amicably discuss the “war” between us and search for a peaceful resolution...

The thaw did not last long. Just hours later, Wood wrote: "You have been played by Michael Flynn. He is a wolf in sheep’s clothing," and added "Remember, Flynn is a master of deceit."