It's not uncommon for a kingsnake to devour a rattlesnake, but it is rare to witness the act happening two steps outside a residential garage. 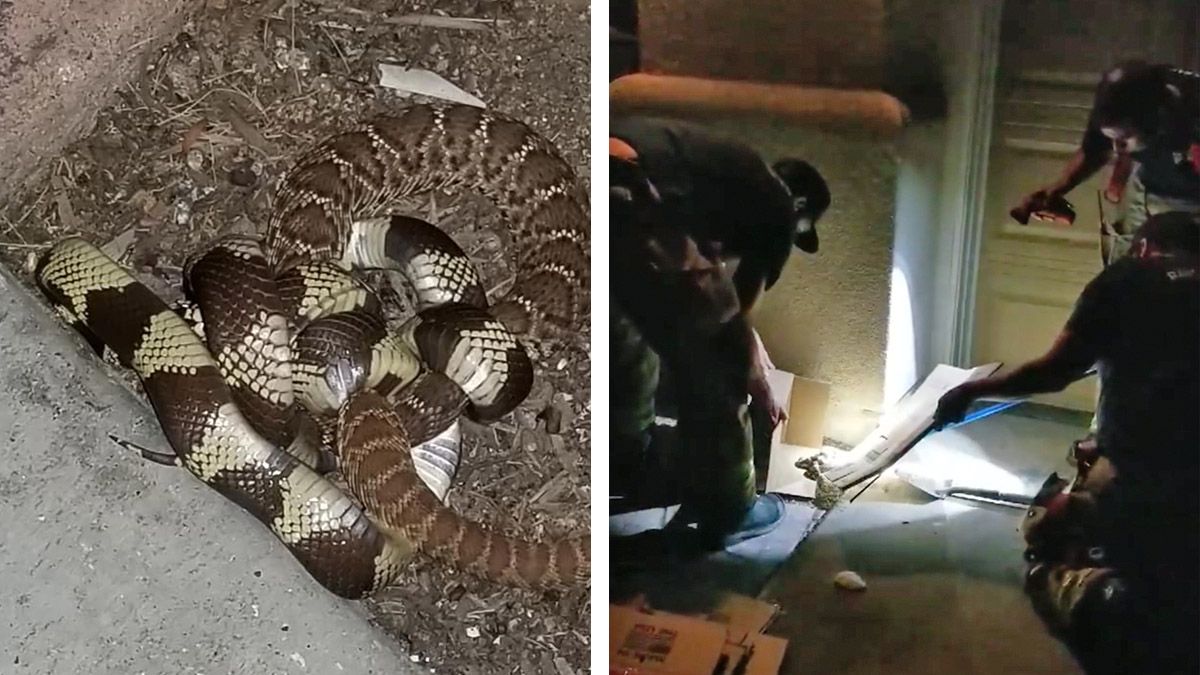 On July 7, 2021, at around 9 p.m., San Diego area resident Ram Seshan was bringing a garden hose to his backyard when something caught his eye. "I saw something that looked really weird," he told us. That strange sight turned out to be a kingsnake swallowing a rattlesnake, and it all happened right outside his garage.

The San Diego Zoo published that kingsnakes "are extremely important for controlling rodent populations." It added: "If you see one of these beautiful creatures while out jogging, hiking, or just relaxing in your garden, enjoy it and consider yourself lucky to be in the presence of a king!"

However, the presence of the rattlesnake, even if it appeared to be in the process of being swallowed, led Seshan, who has a family, to seek help. "I would've stepped on these guys or dragged my hose over them," he said.

Seshan, who lives in the San Diego County neighborhood known as 4S Ranch, made a post on Nextdoor to ask for advice on what, if anything, to do about the situation. Neighbors provided helpful information to local businesses that claim to remove rattlesnakes.

Unfortunately, none of the companies that claimed to operate 24 hours a day answered his calls. This led him to contact local authorities. The fire department ended up coming out to take the kingsnake and the rattlesnake away. The moment was captured on video and posted to Facebook.

Seshan told us that a full-size fire truck showed up with three firemen, who were able to safely get the snakes in a box. It's rare for such an act to occur two steps outside a residential garage. (Courtesy: Ram Seshan)

Many commenters on Nextdoor showed worry that the kingsnake was to be killed. However, Seshan reassured them that it would not be harmed.

Only one [of the firemen] knew anything about snakes. He took one look and immediately went to his truck to get his smartphone to take pictures and videos. He told me this is very rare, and while he knew kingsnakes eat rattlesnakes, he never saw it before.

They were not sure what to do at first, but saw several moving boxes nearby and devised a plan to use a shovel to push them into the box and take them away.

They told me they do not kill the kingsnake. In fact, the fireman who knew about snakes used to have a kingsnake as a pet! They didn't tell me what they would do to the snakes. Most likely they will let the kingsnake fully consume his dinner!

This wasn't the first time Seshan noticed a snake in the area. He told us he's seen them on several occasions, including one on his driveway and another large one he witnessed while walking with his young daughter. "Since we were the first ones to occupy in this development, the builder told us there are many rattlers in the area."

It's rare for a kingsnake to swallow a rattlesnake right outside a residential garage. However, it's not uncommon when it happens in nature.

The Discovery Channel series "Speed of Life" once broadcast video of a kingsnake devouring a rattlesnake in the wild.

The clip ends with the narrator adding: "Snakes are one of this predator's favorite meals."