Trump Shared a Fake Video of Biden. We Asked His Campaign Why.

There are some interesting theories as to why the president keeps sharing misinformation to his followers. 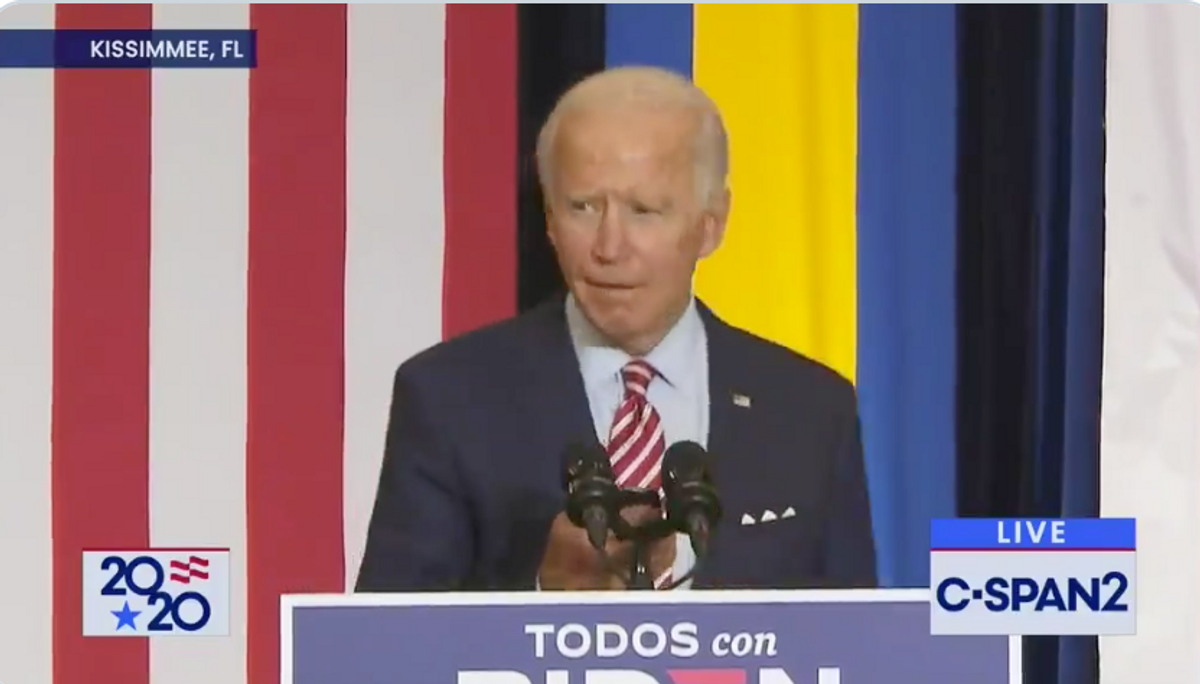 A camera captured the former vice president playing the 2017 Latin pop song "Despacito" by Luis Fonsi from a cell phone, smiling and bopping his head at a podium during a campaign event in Kissimmee, Florida, on Sept. 15, per C-SPAN video evidence. The pop artist was in attendance and also spoke at the event.

But the edited version of the video shared by Trump replaced the pop song with N.W.A’s 1988 single “Fuck Tha Police" apparently to show Biden as being anti-law enforcement. “What is this all about?” Trump tweeted with the fake video.

The intentions of Trump or his campaign were not clear. Additionally, it was unknown whether the president knew the video had been manipulated before or after he shared it, and whether the campaign intended to mislead viewers who could interpret the footage as real.

With no context but the above-mentioned tweets and captions by Trump — including, "China is drooling. They can't believe this!" — we reached out to the campaign on Sept. 16. The request for an interview displayed the tweets by the president including the fake footage, as well as the original video clip in which Biden played "Despacito," with the following questions:

The campaign has yet to answer us. We will update this report when or if it does.

A media group called "The United Spot" initially posted the fake video with the anti-police anthem. The group's YouTube account, which has some 136,000 subscribers, says "all videos are 100% parody/satire" and their goal is "to make you laugh."

Numerous media outlets reported on the Trump tweets sharing the fake video, which Twitter eventually labeled "manipulated media" in an attempt to help viewers discern fact from fiction. Fox News described the posts by the president as "trolling" his opponent — or a purposeful attempt to stir a fight online by sharing provocative content.

At least one ally to the president, Jack Posobiec, celebrated journalists' and others' reactions to the tweets with the doctored videos, describing them as strategic effort by the president to call attention to not only a "cringe-worthy" moment for Biden's campaign," but also his "spectacular failure to support law enforcement." (Note: Trump has repeatedly claimed Biden has sided with left-wing progressives pushing to "defund police," though Biden said he opposes the concept.)

Posobiec, who has been a prominent figure in high-profile misinformation campaigns for years, wrote on the on The Post Millennial, a conservative Canadian website:

At this point, it's astonishing that Twitter and the media haven't clued in to Trump's meme game. Every time he wants to amplify a message, all he has to do is post an effective meme and the media does the job for him.

Per Twitter policies, site administrators may put the label on tweets that were deceptively altered or fabricated, or shared in a deceptive manner. Meanwhile, content that site monitors believe could "impact public safety or cause serious harm" is subject to removal. The policy stated:

We are most likely to take action (either labeling or removal [...]) on more significant forms of alteration, such as wholly synthetic audio or video or content that has been doctored (spliced and reordered, slowed down) to change its meaning. [...]

We also consider whether the context in which media are shared could result in confusion or misunderstanding or suggests a deliberate intent to deceive people about the nature or origin of the content, for example by falsely claiming that it depicts reality.

The misleading statement about law enforcement was not the first instance of Trump tweeting in ways that breached the above-explained policy by Twitter, whether purposefully or not.

For instance, in June 2020, the president shared a video featuring a Black child being chased by a white, supposedly “racist baby,” followed by clips of them hugging. But the video was fake — edited and doctored with a fake news chyron. Twitter labeled the video, which was no longer viewable as of this writing, as "manipulated media" — just like the doctored clip about Biden.

Just weeks later, the president perpetuated a major COVID-19 misinformation campaign by sharing a video featuring a Texas doctor named Stella Immanuel who claimed without evidence that she treated "hundreds" of COVID-19 patients and that masks weren't necessary to prevent the virus' spread. (See our investigation into Immanuel here, and note the Centers for Disease Control and Prevention (CDC) recommends everyone wear masks when they're around others during the pandemic.) Social media sites, including Twitter, removed the video after Trump shared it and it had been viewed millions of times.

As for the doctored clips of Biden, in the absence of an interview with the Trump campaign, the president's specific reasons for sharing the clips were unknown.

In other words, the goal of the Biden video shared by Trump was not to convince Democrats to vote Trump but rather to reinforce existing beliefs among the president's fans, using Linvill's theory. "The more entrenched we are, the less possible it is to agree with the other side," he said.

They’re broadcasting to an audience that already believes or feels a certain way about a politician, so, often, when [the truth of the alteration] comes to light, people just don’t care [...] They say ‘it could have been true’ or ‘nonetheless, it reflects who the person really is.’ There’s a shared form of apathy in some cases for the fact that it was manipulated at all.