Did Trump Tweet a Doctored Video of a 'Racist Baby'?

The fake video joked that the baby must be a Trump supporter. 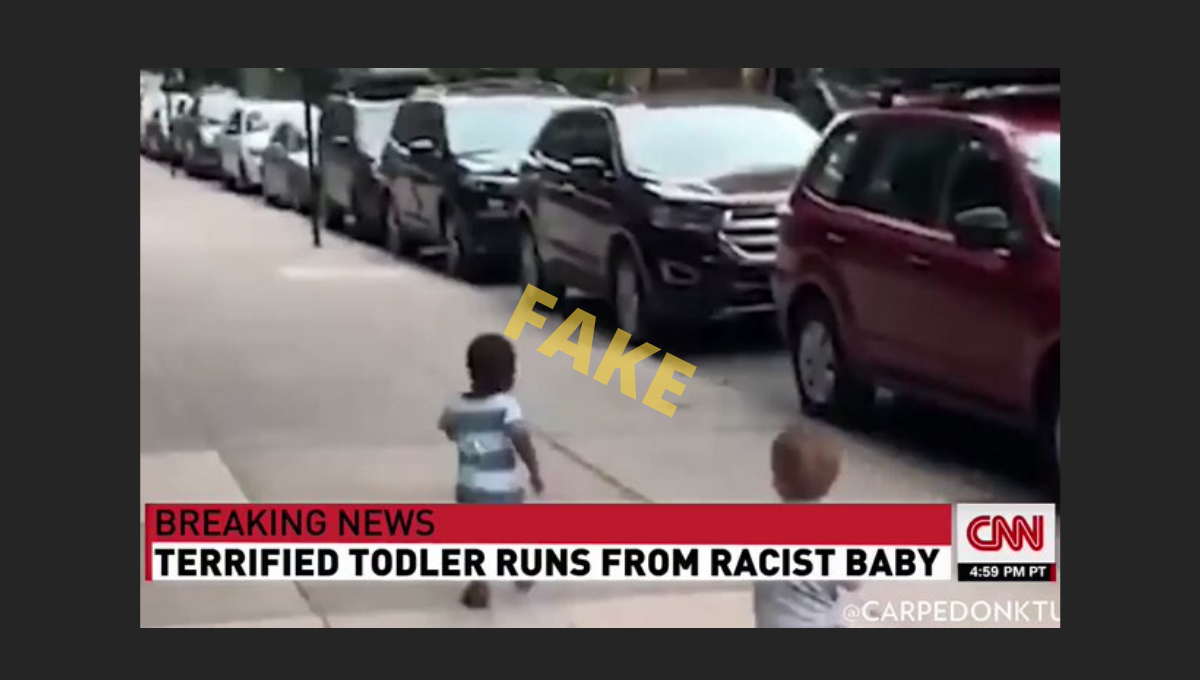 In mid-June 2020, U.S. President Donald Trump shared a video featuring a Black child being chased by a white, supposedly "racist baby," followed by clips of them hugging.

Journalists quickly confirmed it was edited and doctored with a fake news chyron.

CNN confirmed the chyron graphic was fake. Twitter labeled the tweet "manipulated media" soon after it was posted — the fourth time the social media platform took action against the president’s online output in a month.

The minute-long video starts with ominous music and a clip showing footage of a Black child running away from a white child with an edited banner purportedly from CNN, reading, "Terrified todler [sic] runs from racist baby. Racist baby probably a Trump voter." At 11 seconds, a title card appears saying “What actually happened,” followed by a clip of the two children embracing. They then playfully chase each other around. The video ends with the card: "America is not the problem. Fake news is. If you see something, say something. Only you can prevent fake news dumpster fires."

CNN covered the original real story in September 2019 with the title, "These two toddlers are showing us what real life besties look like." The viral video from New York City was originally posted on Facebook by the father of one of the toddlers, who said, "With all the racism and hate going on I just think it’s a beautiful video." The two boys had been friends for more than a year.

After Trump posted the doctored version, journalists took note of the fake chyron, with one saying,"This isn’t even CNN’s typeface."

CNN responded to Trump by telling him to "Be better":

As of writing this, the version of the video that Trump tweeted had almost 16 million views, and has been retweeted more than 180,000 times. The doctored video appears to be watermarked with "@CarpeDonktum," the handle of a Twitter user and Trump supporter who describes himself as a "memesmith."

According to Twitter's rules:

… we may label Tweets containing synthetic and manipulated media to help people understand their authenticity and to provide additional context.