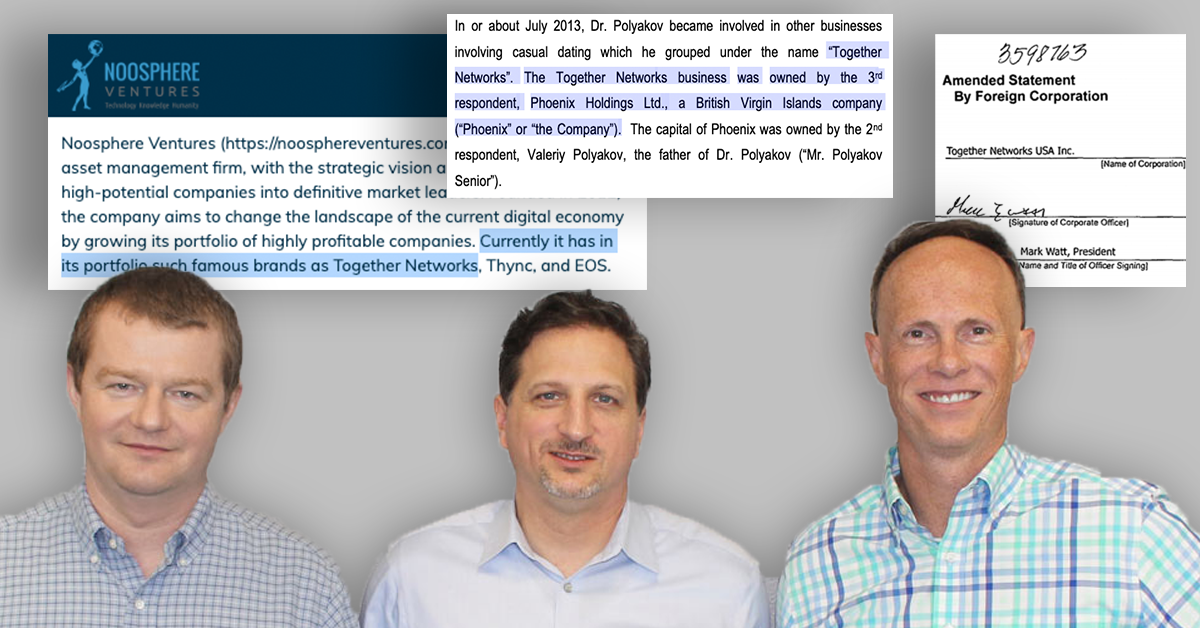 On Feb. 12, 2020, Snopes published a two-year investigation into apparent links between a network of nearly 200 deceptive dating websites and the Texas-based space startup Firefly Aerospace. These sites — with names like Fatty Chaser, Moms Get Naughty, I Want Asian, and Shag Together — use fake profiles to encourage recurring and hard-to-cancel credit card subscriptions. The affiliate marketing platform that promotes them, we documented, has incentivized the pollution of Facebook, Instagram, and dating apps with misogynistic memes or predatory "porn bots" designed to direct traffic to these sites. The dating sites themselves are generally owned or maintained by anonymous companies registered in the British Virgin Islands (BVI) or Malta.

Our reporting linked Firefly Co-Founder and Board Member Max Polyakov and Firefly Co-Founder and one-time Acting Chief Financial Officer (CFO) Mark Watt to both offshore and U.S.-registered companies that are associated with these dating websites. In doing so, we demonstrated that many, if not most, of these deceptive dating websites, or the companies that maintain them, are contained in the portfolio of Noosphere Ventures. Noosphere is a venture capital firm that purchased and is the majority owner of Firefly Aerospace. Its two principal partners are Polyakov and Watt.

Though Polyakov, Watt, and Noosphere have yet to communicate any concerns regarding Snopes’ reporting directly to our newsroom, Noosphere has threatened legal action against people who have merely discussed our reporting. In addition, the company has distributed a statement sowing doubt about our reporting to at least one journalist who had tweeted positively about our story. Additionally, both Watt and Firefly Chief Executive Officer (CEO) Tom Markusic have issued blanket denials in various mainstream media outlets of any connection between Firefly Aerospace and online dating. Here, we break down Watt, Markusic, and Noosphere Ventures’ denials and demonstrate that they do not comport with the facts.

In an article in The Verge that mentioned the Snopes investigation, Watt issued an extremely broad denial of our reporting:

"The Snopes article is incorrect. I am not involved other than my direct relationship with Firefly," Watt said in a message on Wednesday. "I cannot comment on other things as they are wrong."

It is unclear what Watt means when he says he is "not involved." As we reported originally, Watt signed California business-registration papers for both Noosphere Ventures USA and an online dating company featured in our reporting, Together Networks USA. He listed himself as "president" of both companies and filed the paperwork for both on the same day in August 2013. Together Networks USA and Noosphere Ventures also share the same office and at least one employee.

A man referred to in 2016 BVI court documents as a "Mr. James Watt" likely refers to Mark Watt, whose middle name is James. These documents reveal that Watt had, at least in the past, a for-profit stake in a holding company that maintains Together Networks and several other Polyakov-linked dating websites. Watt has yet to respond to or refute our assertion that he is the person named in these papers, despite multiple requests for comment. Since 2013,  Polyakov and Watt have been the two primary figures at Noosphere Ventures. They are also co-founders and board members of Firefly Aerospace. In what appears to be a recurring trend, Watt’s Noosphere employment was removed from his LinkedIn profile following our reporting (above left is a screenshot from Feb. 6, 2020; on the right is a screenshot taken after the publication of our report). Noosphere also vanished from the LinkedIn profile of Laura Edison, a Noosphere-linked lawyer who serves as the director of a related dating company, after we contacted her.

In an interview with Space.com following our reporting, Markusic asserted that he had "no awareness" of any relationship between Firefly Aerospace and the dating company Together Networks:

Markusic asserted that he has had no awareness of any relationship between Firefly Aerospace and Together Networks and their affiliated, deceptive sites. While Noosphere Ventures shares an address with Together Networks, "my understanding is that Noosphere has a portfolio, an exclusive portfolio of tech companies, one of which is Firefly," Markusic said.

If true, Markusic’s lack of awareness betrays a profound lack of basic knowledge about the entity that purchased the company he co-founded. The relationship between Firefly Aerospace and Together Networks is simple and was once fairly public: Together Networks is in Noosphere Ventures’ portfolio according to Noosphere and testimony from previous Noosphere employees, and Noosphere Ventures used money from this portfolio to purchase Firefly Aerospace.

On the website of his current affiliate marketing company, former Noosphere executive Sean Christian described his work at Noosphere as being explicitly focused on "development" of the same dating networks at issue in our investigation:

As an executive at Noosphere, I had the opportunity to work on development inside of Together Networks, UpForIt Networks, and ClickDealer.

In 2017, Noosphere Ventures described itself this way in a press release:

Noosphere Ventures is an international asset management firm, with the strategic vision and capital to transform high-potential companies into definitive market leaders. Founded in 2012, the company aims to change the landscape of the current digital economy by growing its portfolio of highly profitable companies. Currently it has in its portfolio such famous brands as Together Networks, Thync, and EOS.

That this network of sites is or was in Noosphere’s "portfolio" would mean that Together Networks either receives funds from, or contributes profits to, Noosphere Ventures. Court filings suggest that the online dating businesses generate substantial profits.

Perhaps the most perplexing response to our reporting came from a statement released by Noosphere Ventures on Feb. 16, 2020. The unsigned statement claimed to identify "many factual errors" in Snopes' reporting but in reality identified zero.

Instead, the statement released by a firm that lauds its investment in science and technology began with a poorly articulated ad hominem attack on this reporter sourced from a pseudoscientific outlet named The Food Babe:

We draw your attention to … the dubious reputation of the snopes.com. Recall that this resource, Forbes and the BBC were previously found guilty of bias and inaccuracy. FoodBabe has publicly accused Snopes of placing custom-made articles and bullying against its products. Snopes claims to be an apolitical platform, but the ezine’s authors at the same time post articles discrediting the policies of U.S. President Donald Trump.

The statement also asserted without evidence that the timing of our investigation's release was suspicious because Firefly Aerospace was sued by a group of former investors a month prior to our publication. As we have already stated publicly, Snopes had no knowledge of or contact with the parties involved in that lawsuit, and our reporting is wholly independent of that case, as our reporting on these sites began in April 2018.

Their statement listed three "errors." First, Noosphere objected to a characterization Snopes never made: that Polyakov had been director of his former dating company Cupid plc during the time of a BBC investigation that alleged the dating company used fake profiles to entice subscribers. Though we never made such a suggestion, the objection would still be meaningless. It is public knowledge that Polyakov maintained ownership of many, if not most of, these websites well after he left Cupid plc, and we demonstrated these websites still use fake profiles to convince people to give up credit-card information.

Third, Noosphere claimed we erred in our suggestion that the dating websites may represent "potential FTC violations." We arrived at this conclusion by talking to a former Federal Trade Commission (FTC) investigator involved in the first legal action taken against an online dating company. Noosphere’s defense against his assessment appears to come from ignoring the word "potential." In its statement, Noosphere argued that "there has never been any investigation, correspondence or other communication in respect of any of Mr Polyakov’s prior businesses and the FTC." This is true to the best of our knowledge, and it is why we used the word "potential." When the online dating business newsletter Online Personals Watch discussed coverage of our reporting, Noosphere threatened legal action if Online Personals did not remove the story. In the takedown request published in a later edition of the newsletter, Noosphere asserted that it holds no shares in any dating company — an apparent conflict with their own past press releases. The company provided no evidence in support of that conclusion and has not meaningfully refuted any of the facts we used to arrive at our conclusions. These facts include:

Noosphere Ventures' statement concludes by imploring reporters to "put an end to speculation on this topic" and urged "all unbiased media not to spread rumors, but to check the facts independently, according to high journalistic standards."

As with all stories, we welcome the opportunity for any reporter or interested party to check our facts as rigorously as possible. Feel free to provide us with your feedback here.