Conspiracy Theorists Seem Perplexed by a Photo of Obama and Clooney. Here's What It Shows

An innocuous photo of President Obama vacationing with actor George Clooney stirred up questions within the conspiracy community. 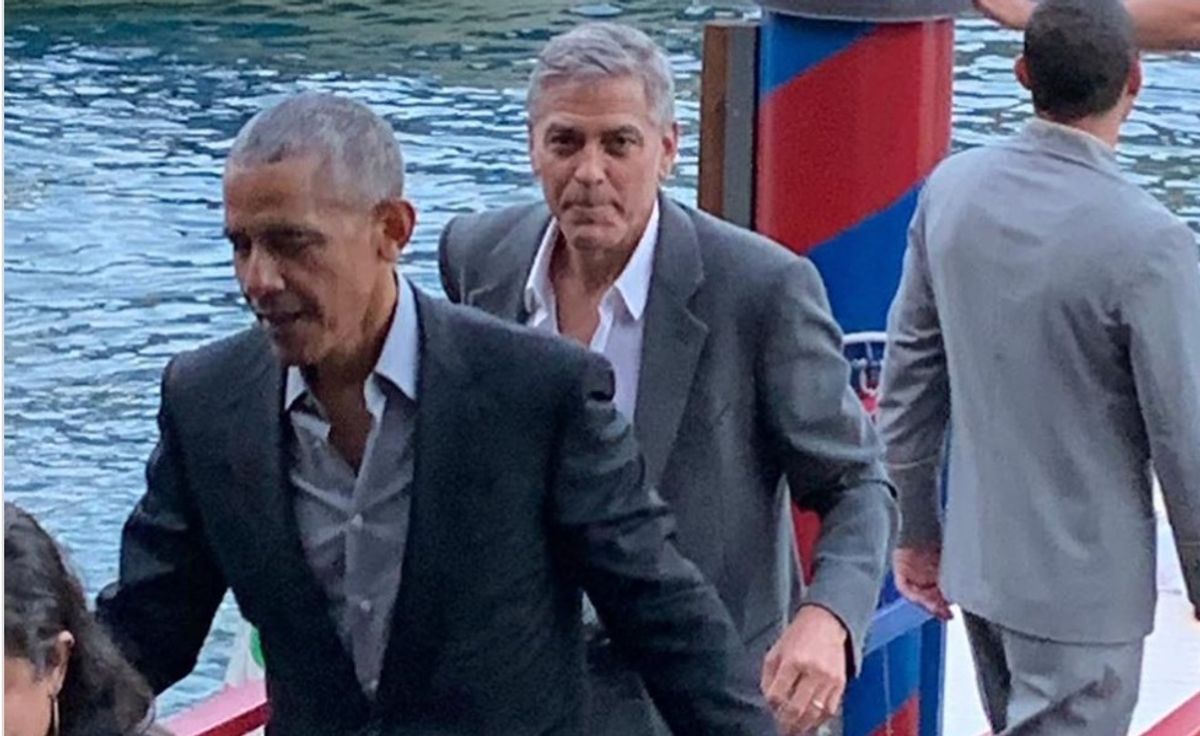 A common tactic among purveyors of misinformation is to hint at lurid or explosive claims by "just asking questions" about otherwise mundane pieces of evidence. Twitter user @WinstonConvefe employed this strategy in July 2019 in posting a photograph of President Obama and actor George Clooney on a boat with a purported child, along with a series of questions suggesting that something nefarious had just occurred: @WinstonConvefe asked, "What was going on then? Why does it look like Clooney is zipping his pants back up? Why does #Obama look stunned? Who is the very young girl?"

While it's possible that this Twitter user was honestly perplexed by the image, the included hashtags, #pedopredators and #EpsteinsBlackBook, made it clear that the actual motive was to suggest that Obama and Clooney were somehow connected to Jeffrey Epstein, a registered sex offender who had recently been to arrested for trafficking minors.

If this Twitter user actually cared about "find(ing) out the truth!," they could have done so with a modicum of effort.

This photograph was snapped on June 23, 2019, while President Obama and his family were visiting with George Clooney and human rights lawyer Amal Clooney at the Clooneys’ home near Lake Como, Italy, during their European vacation. It was one of several photographs that were snapped by paparazzi during this trip.

Photographs from this outing were published by several media outlets, including Just Jared, CBS News, USA Today, Harper's Bazaar, US Magazine, The Hill, and the Daily Mail in articles about the Obamas’ vacation. None of those news outlets indicated anything about the boat ride was suspect:

The Obama family summer vacation has moved from the south of France to Italy’s Lake Como, where the former first family is being hosted by George Clooney at his lakeside mansion.

The Obama family continues to have the best summer vacation ever, as now they’re in Italy and the guests of George Clooney and wife Amal at their Villa Oleandra mansion on Lake Como. 57-year-old former president Barack Obama was seen getting off a boat near the estate along with the 58-year-old actor. They were both wearing suits minus ties instead of casual vacation wear so they meant business of some kind. The Oscar winner was a staunch supporter of Obama during his eight years in office so the two are good friends.

This single image was presented as if it showed Obama and Clooney caught alone on a boat with an underage child in the middle of some nefarious act. However, other images from this boat ride (which were suspiciously excluded by those pushing this claim) show that the vessel was populated with several other people, including First Lady Michelle Obama, Malia and Sasha Obama, Amal Clooney, and other unidentified guests:

The claim that this photograph shows a "child" is also based on nothing more than one Twitter user's interpretation of the image. We examined other photographs showing this person and we're reasonably certain she's an adult: Furthermore, a video showing these passengers leaving the boat posted to the Instagram page of Villa d'Este (Cernobbio) doesn't feature any children:

When you run into Obama's & Clooney's ??in ?? #clooney #amalclooney #barakobama #georgeclooney

The Twitter user sharing this photograph posted a number of questions about the image. We attempt to address all of them below:

What was going on then?

This photograph shows President Obama and George Clooney with an unidentified woman enjoying a boat ride on Lake Como in June 2019. Although not visible in this image, First Lady Michelle Obama, daughters Malia and Sasha Obama, Amal Clooney, and several other people were also on this boat at the time the photograph was taken.

Why does it look like Clooney is zipping his pants back up?

Because his hands are near his belt. While this Twitter user's mind may have gone straight to pedophilia, it is much more likely that the actor was simply tucking in his shirt, adjusting his belt, or performing some other mundane action.

Why does #Obama look stunned?

Does he really look stunned? This question is based on an unproven assumption. Perhaps Obama noticed a photographer following his boat, or maybe he's just gazing off into the distance. It's difficult to discern emotion from nothing more than a single blurry photograph with no context.

Who is the very young girl?

Again, this question is based on an unproven assumption. We examined other photographs and videos from this boat ride and are skeptical that the pictured person was actually a child and not a woman.

Last, it should be noted the source of these "questions" was a Twitter account that had previously shared misinformation. @WinstonConvefe was one of the sources that helped spread a fictitious quote ostensibly uttered by Democratic presidential hopeful Kamala Harris. The account also uses a stock photograph as a profile picture: