One officer reportedly became ill after coming into contact with a paper printed with information from a group alleging covert government mind-control operations. 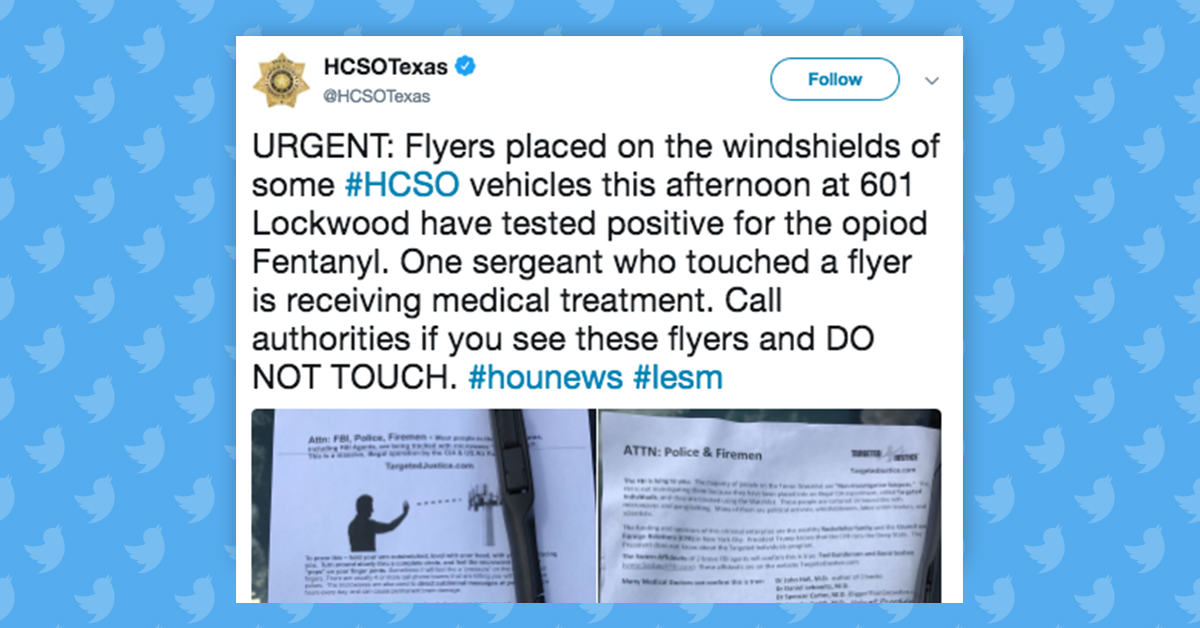 Update: On 29 June 2018, the Harris County Sheriff's Office provided this update regarding what had been widely reported to be fentanyl-laced flyers found on cars parked outside of their station:

Lab tests on flyers that were placed on vehicles belonging to Harris County Sheriff’s Office employees on Tuesday have yielded no evidence of Fentanyl, a dangerous synthetic opioid, according to The Harris County Institute of Forensic Sciences (HCIFS).

Final results of all testing were provided to the Harris County Sheriff’s Office on Friday morning. In addition to testing the 13 flyers, the HCIFS also tested clothing items, and blood and urine samples collected from a Sheriff’s Office sergeant who reported symptoms consistent with Fentanyl exposure. Those tests also were negative for the drug.

Now that the Harris County Institute of Forensic Sciences has completed all testing, the Sheriff’s Office is following up with the public and other law enforcement agencies with the results. The Sheriff’s Office is also working to verify that deputies have access to the most reliable field testing kits available.

At this time, the Sheriff’s Office has not questioned any persons of interest in the case, and no criminal charges have been filed.

On 26 June 2018, the Harris County Sheriff's Department tweeted a warning to their community urging Texans to avoid touching flyers that had been found on the windshields of some department vehicles: According to Sheriff Ed Gonzalez, the flyers were placed on several marked and unmarked vehicles parked outside one of the Harris County Sheriff's stations. One officer encountered the flyer and later became lightheaded, ultimately requiring hospitalization. Another flyer found on a different car tested positive for fentanyl in a field test, but those results are awaiting confirmation from more rigorous laboratory testing.

"She picked it up and didn't think anything of it, but as she drove to her destination she began feeling a little bit lightheaded and having a few other symptoms," said Sheriff Ed Gonzalez to ABC13 News of the deputy involved in the incident. That officer has been released from the hospital and is currently recovering, he added.

The flyers themselves came from the website of a group called "Targeted Justice," a group that that claims to be, but is not, a 501(c) non-profit dedicated to representing what they call "targeted individuals." The group defines the term this way:

A Targeted Individual (TI) is someone that has been selected by the Deep State (usually FBI or CIA) to unwillingly participate in a government torture, experimental program.

This program is designed to break down the individual and "neutralize the person," using psychological, physical, and emotional stress.  The ultimate goal of this program is to control the entire global population.

The site's homepage contains a file of both flyers found on the cars. "Please keep the Police Handout in your car, in case you are stopped by Police," Targeted Justice's web site suggests. In a statement given to reporters, Targeted Justice denied any involvement in the incident, arguing (in part) that anyone could have printed the flyers on their own:

Targeted Justice is a human rights organization. We stand for the US Constitution and the American values of life, liberty, and the pursuit of happiness and the importance of the inalienable rights of the individual. We stand against cruelty, violence and injustice wherever it comes from, even from a perversion of authority. [...]

We do not endorse any activity that could endanger or harm another human. We were quite relieved to hear that the officer who allegedly came into contact with a tainted flyer bearing our information is perfectly fine. We are awaiting more information as to who may have printed off the flyer in question from our website, where it is readily available to anyone. [...]

The most recent version of the group’s web site lists their mailing address as a P.O. box in Peoria, Arizona. An archived version of the page from 8 January 2018, however, used a residential address in Winnsboro, Texas, which is roughly 200 miles north of Harris County. We reached out to Targeted Justice via the contact information listed on their site, but have not received a response.

While we have no reason to doubt the account of the Harris County Sheriff's Department, it does contain a diverse mixture of elements from several popular internet rumors, urban legends, and conspiracy theories, which has lead several skeptical readers to ask us to look into the story.

There have been multiple events reported in which fentanyl contact has been initially suspected in mysterious illnesses that have later proven to be unrelated. While a field test was employed in this instance, the results of such a test cannot be considered conclusive until verified by an accredited laboratory. We reached out to the Harris County Sheriff's Department to ask which field test was employed and when the results of the laboratory tests will be returned, but have not yet received a response.

The warning from the department’s Twitter page suggests that people not touch the flyers if they encounter them. This is reminiscent of claims alleging that fentanyl can be absorbed directly through the skin. While this is a claim that is made in Drug Enforcement Agency training manuals, it is also disputed by scientists. However, touching a flyer that had fentanyl powder on it could liberate particles for a person to inhale, and it does take a remarkably small dose to cause serious harm.

Targeted Justice, animated by their own more classical conspiracy theories, argued that lacing fentanyl on their flyers runs counter to their mission of educating people about the harm our government is inflicting on innocent people because it would prevent more people from seeing their message (a questionable point given media attention their group is currently receiving):

When an organization puts together an informative flyer it is not logical to scare people away from reading it. We can only assume, this was a desperate move done to censor information the public needs to know for its own safety.

"Our investigators have submitted several paper flyers to the Harris County Institute of Forensic Sciences to confirm a field test that detected the dangerous opioid," the department said in a 27 June 2018 tweet. "While we await those results, we are pursuing leads in the case."

Update [29 June 2018]: Updated to include that forensic tests came back negative for fentanyl.