Did 80 Percent of Undocumented Minors Arrive in the United States Without Parents?

Both the White House and Attorney General have used (and misused) a rudimentary and unverifiable statistic in order to downplay their roles in the family separation crisis at the U.S.-Mexico border. 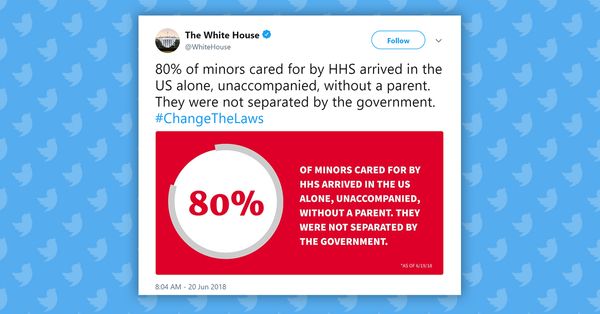 On 8 May 2018, Attorney General Jeff Sessions announced that for immigrants illegally crossing borders, officials would enforce a 'zero tolerance policy' explicitly stating that one effect of the policy would be the enforced separation of children from their parents. Prior to the announcement, multiple administration officials justified such a move on the grounds that this forced separation could serve as a deterrent to future illegal immigration.

Before this policy was in widespread use, Customs and Border Protection had significantly more leeway in deciding which cases they referred for prosecution, limiting the number of family units that would have been separated before referring them to the care of the Health and Human Services’ Office of Refugee Resettlement.

Following the policy’s widespread enforcement and the abandonment of the the discretion previously afforded CBP, a reported 2,342 children were separated from 2,206 parents at the US-Mexico border between 5 May 2018 and 9 June 2018, and with no apparent plan for reuniting them with their families. In some cases, children still remain in detention camps in the United States and their parents have already been deported.

On 18 June 2018, following widespread bipartisan and international condemnation of Sessions’ "zero tolerance policy," the administration reversed course, attempting to fix the separation issue with a vague (and ineffective) executive order. Following this move, the White House tweeted a statistic suggesting that most of the children detained were not, in fact, forcibly separated from their parents, but children who came without a parent in the first place, along with an exhortation to "change the laws":

80% of minors cared for by HHS arrived in the US alone, unaccompanied, without a parent. They were not separated by the government. #ChangeTheLaws pic.twitter.com/rYRJmAaKxs

It is vitally important to understand where this number comes from, what it means, and what it does not mean, as it has become a widespread talking point used to diminish the role the Trump administration has played in separating children from their parents as a deterrent to illegal immigration.

From a literal standpoint, the White House stated that (for example) on the specific day of 20 June 2018, there were 11,887 minors under the care of the HSS, and that on that specific day, 9,834 of those minors were classified as having arrived in the country without a guardian.

Those 9,834 people, however, actually represent the population of children detained prior to the official adoption of the policy.

Alex Nowrasteh, a senior immigration policy analyst at the Cato Institute's Center for Global Liberty and Prosperity, told us that the calculation appears quite rudimentary:

[The 80% statistic is] based on [...] what some HHS spokesperson said, and then what some people have reported as the number of kids separated, but that's it. I mean, that's a real back-of-the-envelope [calculation], because we don't know anything about the numbers that are in HSS anyway.

There is no data publicly available, in other words, that codifies the status of the minors who crossed the border earlier than Sessions' implementation of the "zero tolerance" policy.

It bears mentioning, as well, that all children who arrive at an Office of Refugee Resettlement facility — regardless of with whom they crossed the border — are considered unaccompanied once they are detained.

While the 80 percent statistic is flawed in its own right (more on that below), this already questionable number has been repeatedly misused by Trump administration officials and surrogates to make a substantively different claim about the nature of immigration itself.

The most notable example comes from United States Attorney General Jeff Sessions himself. When he defended the Administration's zero tolerance policy in a speech to the National Association of School Resource Officers in Reno, Nevada on 25 June 2018, he stated: (emphasis ours):

We’ve [...] seen an increase in children being sent by themselves because of the incentives in our broken system.

More than 80 percent of the children crossing the border are coming by themselves without any parents or guardian sent with a paid smuggler—we can only guess as to how many never make it to our border during that dangerous journey.

We reached out to the Department of Justice to confirm that Sessions was referring to the same statistic as the White House. A DOJ spokesperson told us via e-mail that the 80 percent figure came from "10,000 [children in HHS detention who arrived unaccompanied] out of 12,000 [children in HHS care in total]" — the same "back-of-the-envelope" calculation employed by the White House. Sessions, however, either misunderstood or deliberately mischaracterized its meaning.

In reality, however, the number refers only to children who have been processed by CBP and then sent to the care of HHS’s Office of Refugee Resettlement. It does not necessarily reflect the demographics of border crossers overall, and it includes individuals whose familial status at the time of crossing is unknown.

We know this because there is actually a government agency that collects data on the status of individuals apprehended crossing the southern border, and it is not Health and Human Services. U.S. Customs and Border Protection provides detailed reports on border apprehensions every year.

Their data indicates that between 1 October and 31 May 2018, 252,187 individuals were apprehended crossing the southern border, and of these 32,372 (13 percent) were identified as unaccompanied alien children. Another 59,113 individuals were IDed as being part of a "family unit" (23 percent).

The "family unit" distinction is problematic when trying to verify what percentage of minors crossed alone — the statistic to which Sessions claims he is speaking — because those 59,113 include both minors and the family member or members they were with at the time of separation.

At least publicly (and according to the Department of Justice, all of the information is public), the data needed to verify Session’s claim does not exist, and instead relies on the untestable assumption that the demographics of the children in Health and Human Service's care match the demographics of child border crossers in general.

We asked the DOJ for clarification on this point in a follow-up email, and they declined to provide further comment.

Attorney General Sessions’ flawed reasoning notwithstanding, the claim that 80 percent of children currently in HHS care arrived there after crossing the border alone is likely misleading as well. This is because it assumes that the population of children in the care of Health and Human Services who arrived in custody before the adoption of "zero tolerance" all uniformly crossed the border without a guardian.

As discussed above, the United States government does not collect the data required to test that assumption. In fact, prior to the wide dissemination of the 80 percent statistic by the White House, the government actually acknowledged the fact that there was no way of knowing the status of the children (when they crossed the border) that were detained prior to the zero tolerance policy.

When we asked for evidence of the 80 percent statistic, a Department of Justice spokesperson sent us link to the Washington Post’s coverage of the rapid increase of separated children in HHS care, telling us that Health and Human Services provided that data to the Post. This story, written on 29 May 2018, explicitly stated the the percentage of children in HHS care who crossed without a parent prior to the policy’s enforcement was unknown:

The latest figures do not distinguish between minors who arrive without a parent and those who are separated from their mothers and fathers after they cross the border.

However, based on the White House’s own reasoning later repeated by a DOJ spokesperson, the government now considers any child being cared for by HHS who arrived before the "zero tolerance" policy was implemented is in fact there because he or she arrived without a guardian — despite the fact that HHS data cannot speak to that question, and despite the fact that there have been multiple reported instances of separations carried out prior to the "zero tolerance" policy. While their assumption may make the math simple, it does not necessarily reflect reality.

Ultimately, as Nowrasteh said, we can do very little but take the government’s word regarding numbers of unaccompanied alien children detained by HHS, despite the fact that senior administration officials have already mischaracterized them. "It's hard to check the math," he told us. "It's hard to make sure that what the administration says is going on is actually what's happening."