Is This Tractor Towing a Russian Jet Captured in Ukraine?

Ukrainian farmers have been filmed towing all sorts of abandoned military gear with their tractors. 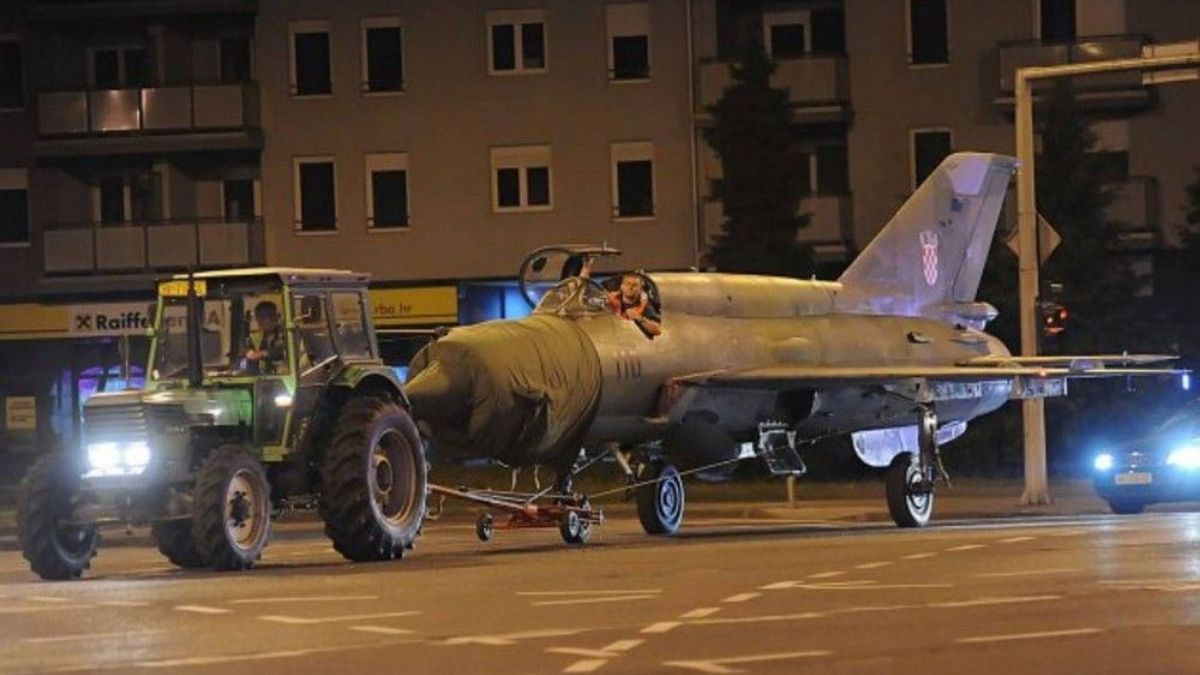 Image Via Croatia Ministry of Defense

Claim:
A photograph shows a Russian plane being towed behind a tractor in Ukraine.
Rating:

In the weeks after Russia's invasion of Ukraine in February 2022, several photographs and videos have surfaced online supposedly showing Ukrainian farmers towing abandoned tanks and other military gear with their tractors. While many of these images are genuine, some, such as the following photograph, have been incorrectly captioned: This photograph, captioned "Ukrainian farmer captured a Russian military jet," was not taken in Ukraine in 2022 and does not show a Russian plane.

The photo dates back to 2011 when Croatia celebrated the 20th anniversary of the formation of the Croatian Armed Forces. According to the Croatian news website 24sata.hr, it shows a Croatian MiG being pulled by a tractor through the streets of Zagreb on its way to Jarun, where it would be put on display for the celebration.

On the occasion of the 20th anniversary of the formation of the Croatian Armed Forces, the tactical and technical corps of weapons, combat and non-combat techniques and equipment of units of the Armed Forces and the Ministry of the Interior will be exhibited at Jarun in Zagreb from Friday to Sunday.

On Thursday night, the citizens of Zagreb could see a MIG towed by a tractor on the city streets. The plane will also be exhibited at Jarun, and the central celebration of the Armed Forces Day will be on Saturday, the Ministry of Defense writes .

In addition to the image's source, viewers could also determine that this wasn't a Russian plane by taking a careful look at the coat of arms displayed on its tail. It's the Croatian coat of arms.

The above-displayed image is entirely unrelated to Russia's attack on Ukraine in 2022.

Have Ukrainian Farmers Used Tractors To Take Other Military Equipment?

There have been several other videos that supposedly show Ukrainian farmers using their tractors to tow away abandoned military equipment. While we haven't thus far found grounds to debunk those videos as inauthentic in any way (by, for example, finding that they predate the 2022 conflict such as in the example above), we haven't been able to verify them, either.

Regardless of their authenticity, Vice News reported that the tractor has become a "symbol" of resistance in Ukraine thanks in part to these rumors:

Like St. Javelin and the Ghost of Kyiv before it, the humble tractor has become a symbol of Ukraine’s resistance to Russia’s invasion. Videos and pictures of tractors hauling away Russian armor have gone viral on social media. Though none have been verified, there’s half a dozen or so clips making the rounds and as they’re shared, they’re eventually turned into memes, posters, and T-Shirts. A tractor hauling away Russian armor is now as ubiquitous a symbol as the Javelin or Molotov Cocktail.

It's worth noting that the Ukrainian government really did put out a statement telling citizens that they need not worry about declaring any seized equipment for military purposes. Listings for used Russian tanks on eBay, however, are likely fake.