Ukrainians have truly taken over some Russian tanks, but selling them on eBay? 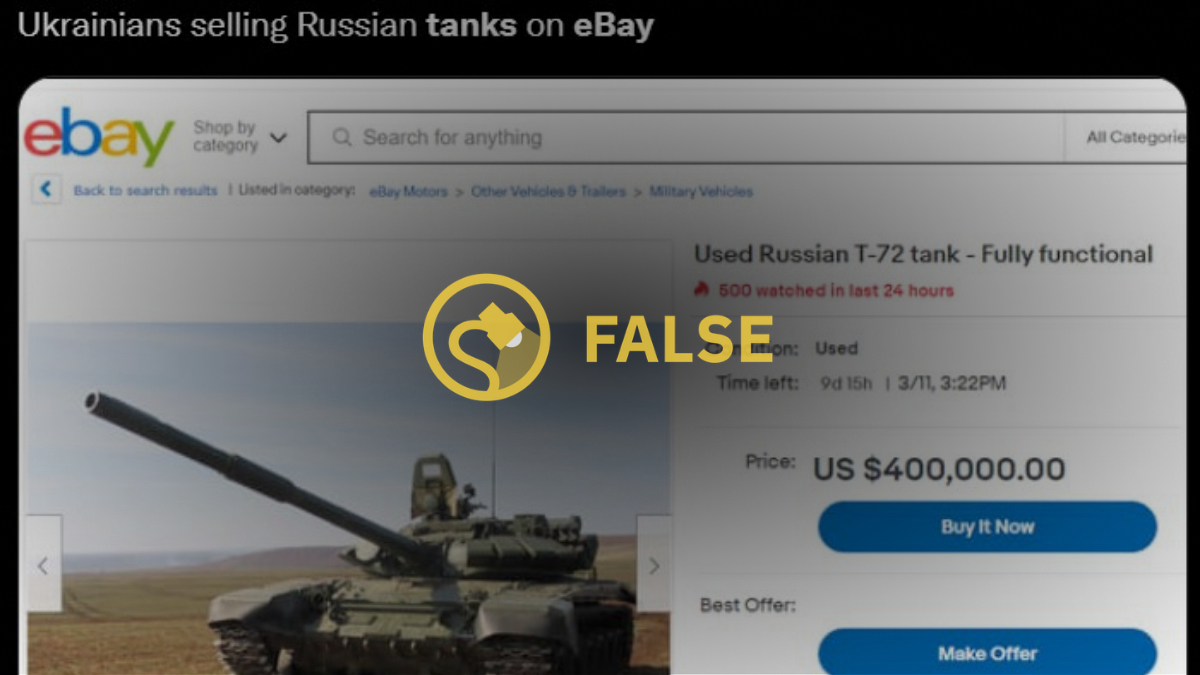 Claim:
An image shows an eBay listing for a "used" Russian tank that was recently seized by Ukrainians.
Rating:

In February 2022, an image started circulating on social media that supposedly showed an eBay listing for a used Russian tank that had been seized by people in Ukraine: This doesn't appear to be a genuine eBay listing.

For one, we weren't able to find any used Russian tanks currently being offered (or recently sold) on eBay. Second, the included picture does not show a Russian tank that was recently seized by Ukrainians. While this photograph does appear to show a Russian T-72 tank, this picture has been online since at least 2010.

The Truth Behind This Joke Listing

While this eBay listing isn't real, Ukrainians have truly taken possession of several Russian tanks that were abandoned during the country's attack on Ukraine. A number of videos have circulated online showing farming tractors towing these heavy pieces of military equipment down the street.

While we can't verify the specifics of this "farmer stole tank" video, Ukraine's National Agency for the Protection (NAPC) stated on its website that "property acquired in battle" is not the "result of a transaction, but in connection with full-scale aggression from 24.02. 2022 of the Russian Federation regarding the independent and sovereign Ukrainian state as a continuation of the insidious attack of the Russian Federation on Ukraine launched in 2014" and equated seized military gear to "scrap" of no claimable value.

Any Ukrainians who truly came into possession of a tank or other military gear may want to check the NAPC's website for the official laws regarding such items. The NAPC summarized their stance in a statement via Interfax Ukraine:

"Have you captured a Russian tank or armored personnel carrier and are worried about how to declare it? Keep calm and continue to defend the Motherland! There is no need to declare the captured Russian tanks and other equipment, because the cost of this ... does not exceed 100 living wages (UAH 248,100).

"Speaking by the letter of the law, combat trophies are not subject to reflection in the declaration for the following reasons: they were acquired not as a result of the conclusion of any type of transaction, but in connection with the full-scale aggression of the Russian Federation on February 24, 2022 against the independent and sovereign Ukrainian state as a continuation the insidious attack of the Russian Federation on Ukraine launched in 2014. Thanks to the courage and victory of the defenders of the Ukrainian state, enemy military equipment usually comes to you already destroyed and disabled, which makes it impossible to evaluate it in accordance with the law On the valuation of property, property rights and professional valuation activities in Ukraine. Therefore, it is also impossible to find out how much such property costs,” the NACP said.