Do Two Oceans Meet in This Photograph?

Photographs purportedly capture the spot where two oceans merge in the Gulf of Alaska. 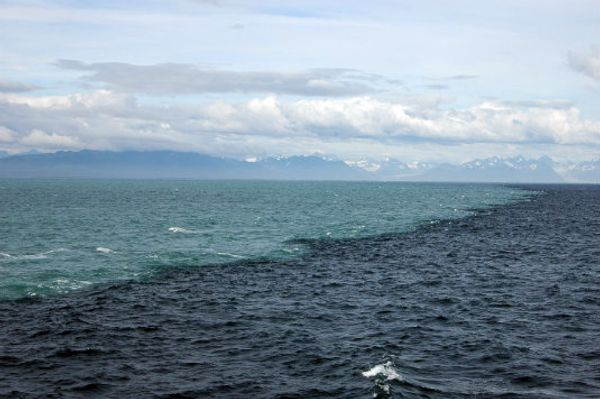 Claim:
Photographs show the place where two oceans meet in the Gulf of Alaska.
Rating:

Photographs purportedly showing "the place where two oceans meet" in the Gulf of Alaska have circulated online for several years. Although the images are real, there are several misconceptions about what they actually depict.

The first photograph of this phenomenon to go viral was taken by Ken Bruland, a professor of ocean sciences at the University of California-Santa Cruz, during a research cruise in 2007: This photograph is frequently shared with the claim that it depicts a place where "two oceans meet," but that is not the case. Bruland explained that the picture actually captures what occurs when sediment-laden water from glacial rivers empties out into the ocean:

"Glacier rivers in the summertime are like buzzsaws eroding away the mountains there," Bruland said. "In the process, they lift up all this material — they call it glacial flour — that can be carried out."

Once these glacial rivers pour out into the larger body of water, theyre picked up by ocean currents, moving east to west, and begin to circulate there. This is one of the primary methods that iron — found in the clay and sediment of the glacial runoff — is transported to iron-deprived regions in the middle of the Gulf of Alaska.

Photographer Kent Smith captured another amazing image of the "place where two oceans meet" during a similar cruise in 2010:

@Chinmayi WHERE TWO OCEANS MEET These two bodies of water were merging in the middle of The Gulf of Alaska @Chinmayi pic.twitter.com/uv4iPb58oM

Another misconception associated with these types of photographs is the notion that they document a permanent location off the coast of Alaska. This is not true: in addition to the fact that ocean currents are constantly shifting, Bruland says that this "border" will eventually fade as the iron-rich waters from glacial rivers mix with the ocean:

As for that specific photo, Bruland said that it shows the plume of water pouring out from one of these sediment-rich rivers and meeting with the general ocean water. It's also a falsehood that these two types of water dont mix at all, he said.

"They do eventually mix, but you do come across these really strong gradients at these specific moments in time," he said. Such borders are never static, he added, as they move around and disappear altogether, depending on the level of sediment and the whims of the water.

These images are genuine and capture what occurs when two bodies of water, one rich with glacial flour, begin to merge. The photographs do not, however, depict a static location in the Gulf of Alaska where "two oceans meet."