We looked at the context behind a meme that showed two messages purportedly tweeted by Trump on the day of the Capitol riot. 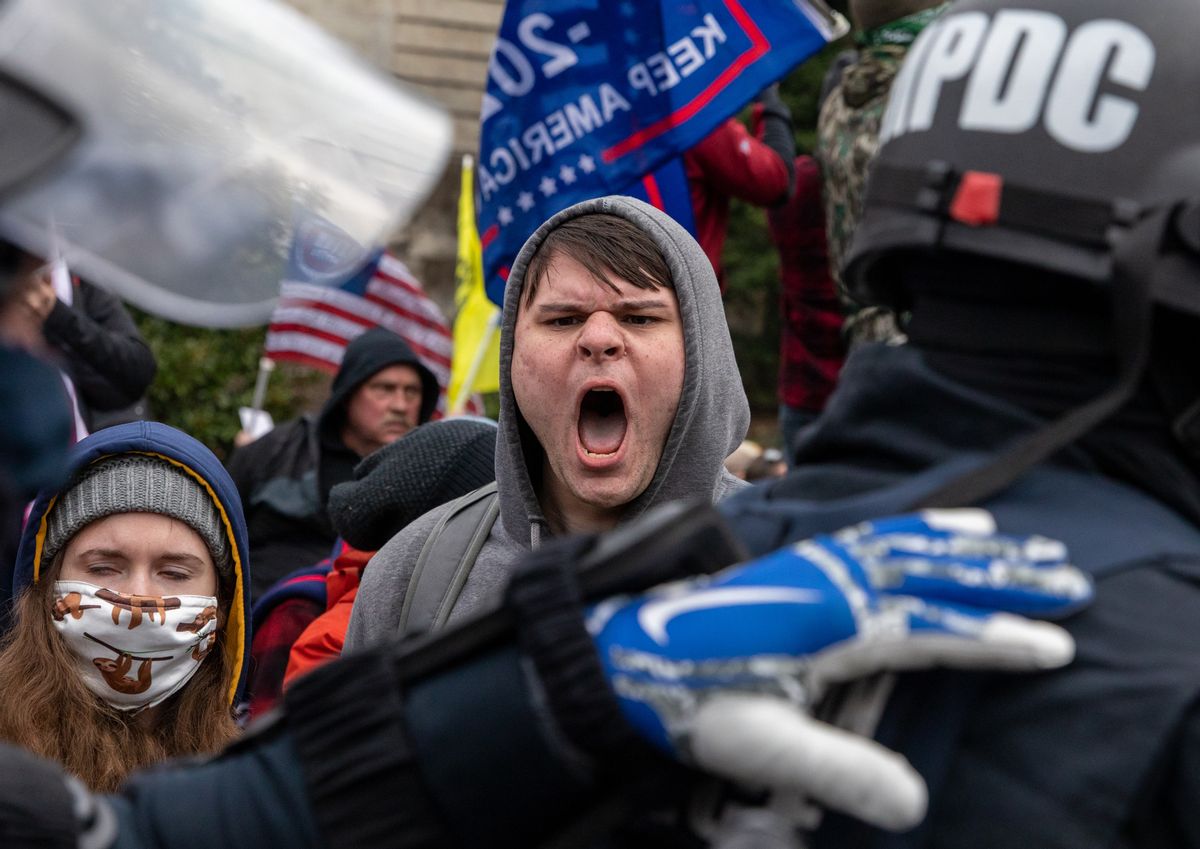 Claim:
A meme on social media says that, on Jan. 6, 2021, the day of the riot at the U.S. Capitol, then-U.S. President Donald Trump tweeted to followers to "remain peaceful" with "no violence" and urged them to "support our Capitol Police and law enforcement."
Rating:

Trump did tweet to his supporters to "remain peaceful." However, the meme lacks important context. The tweets were posted after the violence of the day had already begun. Further, the tweets came many months after Trump baselessly predicted that the 2020 U.S. presidential election would involve massive voter fraud. As for the apparent accusation at the bottom of the meme that hinted Trump's tweets about being "peaceful" were covered up, a simple Google search showed that the insinuation was misleading.

In early June 2022, we received reader mail that asked us to look into whether former U.S. President Donald Trump tweeted to his followers on the day of the U.S. Capitol riot to "remain peaceful" with "no violence" and to "support our Capitol Police and law enforcement." The purported tweets from Jan. 6, 2021, showed up in a meme that was shared on social media. At the time that readers asked us about the meme, the U.S. House panel investigating the insurrection was taking part in several televised hearings to lay out its findings. "Does anyone remember these tweets ... probably not because they were removed," the meme read.

We confirmed that these two tweets were genuine. However, there's a lot of context about this meme to cover here. (In the past, Trump repeatedly shared tweets that showed he was strongly against his words being taken out of context.)

On Jan. 8, 2021, Twitter permanently suspended Trump's account following the events at the Capitol. However, both messages were still available on his Facebook page, where he eventually was suspended from posting for two years. His Facebook suspension also occurred following the Capitol riot.

The bottom of the meme appeared to claim that there was a cover-up of some kind to hide these tweets from the public. In reality, the two tweets were printed by countless news organizations and other blogs in articles that were published around the world.

Perhaps most important about the context behind the meme was that these tweets from Trump came after the violence at the Capitol had already started — and many months after he began to promote baseless predictions of massive voter fraud in the 2020 U.S. presidential election. The primary reason behind the violent events on Jan. 6 stemmed from the false belief by Trump's supporters that the election had been stolen.

The first message included in the meme was posted at 2:38 p.m. Eastern Standard Time (EST) on Twitter and 2:40 p.m. on Facebook. It read, "Please support our Capitol Police and Law Enforcement. They are truly on the side of our Country. Stay peaceful!"

The second message from the meme was posted minutes later at 3:13 p.m. on Twitter and 3:14 p.m. on Facebook. The post said, "I am asking for everyone at the U.S. Capitol to remain peaceful. No violence! Remember, WE are the Party of Law & Order – respect the Law and our great men and women in Blue. Thank you!"

USA Today published a timeline of the Capitol riot that showed the grounds had already been breached before Trump issued his tweets to be "peaceful." In fact, after the grounds had been breached, Trump first tweeted, "Mike Pence didn't have the courage to do what should have been done to protect our Country and our Constitution, giving States a chance to certify a corrected set of facts, not the fraudulent or inaccurate ones which they were asked to previously certify. USA demands the truth!"

With the help of a bullhorn, one of the apparent protesters at the Capitol riot read to the crowd Trump's tweet about Pence. The following video, which was unveiled by the U.S. House panel investigating the riot, showed this to be the case:

'We Love You. You're Very Special.'

More than an hour after Trump's second tweet was posted, a video appeared on his social media accounts around 4:17 p.m. In the video, Trump repeated the baseless allegations of voter fraud and falsely claimed that his campaign had been victorious in a "landslide" victory. He told supporters, "But you have to go home now." He also spoke to the violent rioters, saying, "We love you. You're very special."

Trump's last tweet of the day came at 6:01 p.m. He said, "These are the things and events that happen when a sacred landslide election victory is so unceremoniously & viciously stripped away from great patriots who have been badly & unfairly treated for so long. Go home with love & in peace. Remember this day forever!" This was one of Trump's final tweets to be posted on Twitter prior to his permanent suspension.

Earlier in the day, Trump had given a speech to supporters on the Ellipse in Washington, D.C. According to The Associated Press, some supporters left early for the Capitol before he was finished speaking. Other supporters spent the morning "casing the entrances to the Capitol." During the speech, Trump used the word "peacefully" one time. According to a transcript, Trump said, "I know that everyone here will soon be marching over to the Capitol building to peacefully and patriotically make your voices heard."

Trump also told supporters, "We're going to walk down to the Capitol." In the speech, he said that he would be walking to the building with them. "I'll be there with you," Trump said. However, he did not go with them.

Prior to Trump's speech, former New York City Mayor Rudy Giuliani and others warmed up the crowd with brief remarks. Giuliani said, "Let's have trial by combat!" Rep. Mo Brooks, R-Ala., also told those gathered at the Ellipse, "Today is the day American patriots start taking down names and kicking ass."

In sum, yes, Trump did tweet to his supporters who were already rioting at the Capitol to "remain peaceful" with "no violence" and to "support our Capitol Police and law enforcement." However, a lot of context was missing from the meme. The tweets were posted after the violence at the Capitol had already begun and many months after the former president began pushing baseless accusations of voter fraud.

Note: As of June 2022, more than 800 people had been arrested for their alleged participation in activities related to the Capitol riot. The Washington Post reported that 140 law enforcement officers were injured during the violence. Further, CNBC published that Capitol Police Officer Brian Sicknick died the day after the riot, and at least four other officers also later died by suicide.