Did Trump Send This Phallic Christmas Card in 2021?

The card with a picture of former U.S. President Donald Trump read: "Merry Christmas From The Winter White House." 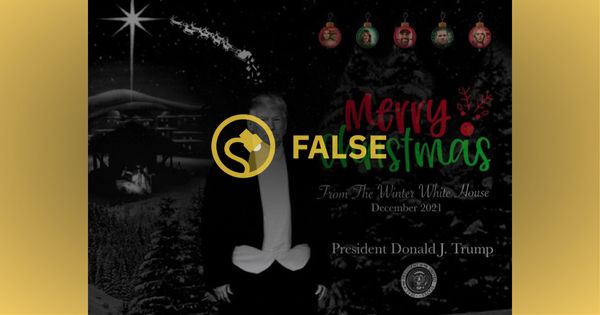 This phallic Christmas card featuring former President Donald Trump was not an official item from the family or his organization. (Image Via Twitter)

In early December 2021, former U.S. President Donald Trump appeared in a Christmas card with a festive and quite phallic design. The image was shared heavily by left-leaning and anti-Trump social media accounts. The @duty2warn Twitter account claimed: "Yes, this is real." These tweets from @duty2warn seemed to be two of the most shared about the Trump Christmas card on Twitter. "No, this is not a parody," Stern claimed.

Some pointed out that Trump's youngest son Barron was missing from the card. Others simply wanted to know if it was genuine: "From The Winter White House."

However, no, this was not an official holiday item from the Trumps. It was a joke created and distributed by someone other than the Trump family whose identity we have not yet established. CNN journalist Daniel Dale, among others, also debunked the fake card.

It's unclear if Trump has multiple Christmas cards for different purposes, but BBC journalist Shayan Sardarizadeh did find one of Trump's real Christmas cards that was for sale in 2021: This official Trump Christmas card was available on the Save America website.

Sardarizadeh also tweeted about the fake card and the real one:

The picture of Trump wearing the outfit came from a photograph that was captured before a banquet at Buckingham Palace on June 3, 2019. This was far from the first time that something untrue about Trump was shared on Twitter.

For example, in 2017, Twitter users claimed that while Trump was president, a picture showed that he impatiently dumped a box of fish food into a koi pond while visiting Japan's Prime Minister Shinzo Abe. However, he was simply following Abe's lead. Further, a video from former U.S. President Barack Obama's 2016 visit to Vietnam showed a similar situation. In the clip, Vietnam’s National Assembly Chairwoman Nguyen Thi Kim Ngan was shown dumping her food in the same fashion as Trump.

Also in 2017, Twitter users posted about how Trump purportedly "bullied" a child at the White House Easter Egg Roll. It all started when a boy asked for Trump to sign his hat. Trump signed it and then threw the hat back in a playful fashion. From one camera angle, it appeared he didn't return to the hat to the boy, which led to the tweeting by people who claimed he "bullied" the kid. However, a second angle showed that the hat toss did end with the item being returned to the same boy.

In sum, no, the phallic Christmas card with Trump's face was not an official item. It was simply a gag.

On Dec. 6, we added a new tweet from Grant Stern where he apologized for tweeting the fake Christmas card.