An image showing President Trump dumping fish food into a koi pond was shared with misleading statements about his behavior. 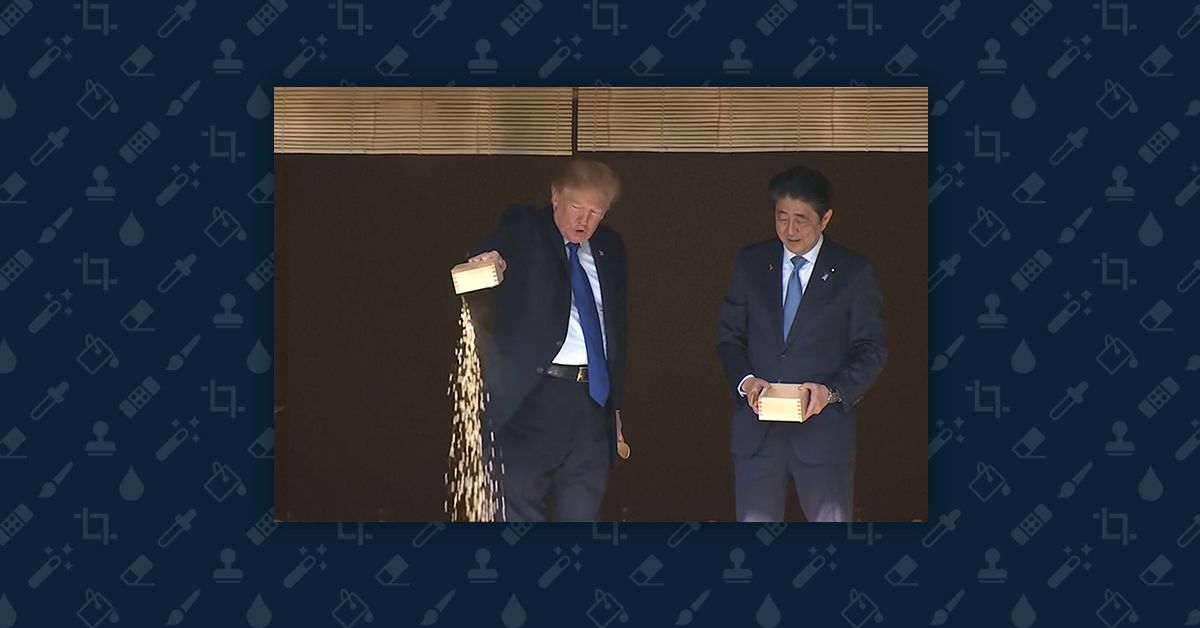 An image is worth 1000 words. Unfortunately, sometimes those words are misleading.

A photograph showing President Donald Trump dumping a box of fish food into a koi pond at the Akasaka Palace in Japan was widely circulated on 5 November 2017 along with some misleading claims about the President's behavior:

As the image went viral on social media, it was frequently shared with messages stating that Trump's decision to empty his box of fish food into the pond was somehow rude, rash, or disrespectful, that he was ignoring Japanese customs, or that he was somehow putting these fish in danger by overfeeding them.

The Guardian, for instance, posted the image on Twitter with the caption "Trump dump: president throws entire box of fish food into precious koi carp pond."

A video also surfaced which seemingly reinforced the idea that Trump was being crass when he dumped his fish food into the pond:

President Trump feeds fish with PM Shinzo Abe in Japan, then pours the entire box of food into the koi pond. pic.twitter.com/CQjGGf5k0J

This clip, however, omitted some important context. President Trump was following Japanese prime minister Shinzo Abe's lead when he dumped his fish food into the koi pond. This video (interestingly also from the Guardian) shows Abe emptying his box of food into the pond before Trump:

Several outlets issued retractions or updated their articles after the full video surfaced.

President Obama was also dragged into this "Koi-gate" controversy as some Twitter users claimed that Trump's predecessor was somehow more adept at feeding fish:

The image of President Obama feeding fish was taken in May 2016 during a visit to Vietnam and showed the President feeding fish near the house where Ho Chi Minh used to live. Although Obama did not dump his food into the pond, Vietnam's National Assembly Chairwoman Nguyen Thi Kim Ngan did:

The image showing President Trump dumping fish food into a koi pond is real. However, the president's fish-feeding was perfectly adequate. In fact, he wasn't ignoring any customary procedures by dumping the remnants of his fish food into the pond and was simply following Japan Prime Minister Abe's lead when he did so.