Did Tim Tebow Kneel During the National Anthem in Protest of Abortion?

Tim Tebow and Colin Kaepernick are both famous for kneeling during football games, but in dramatically different contexts. 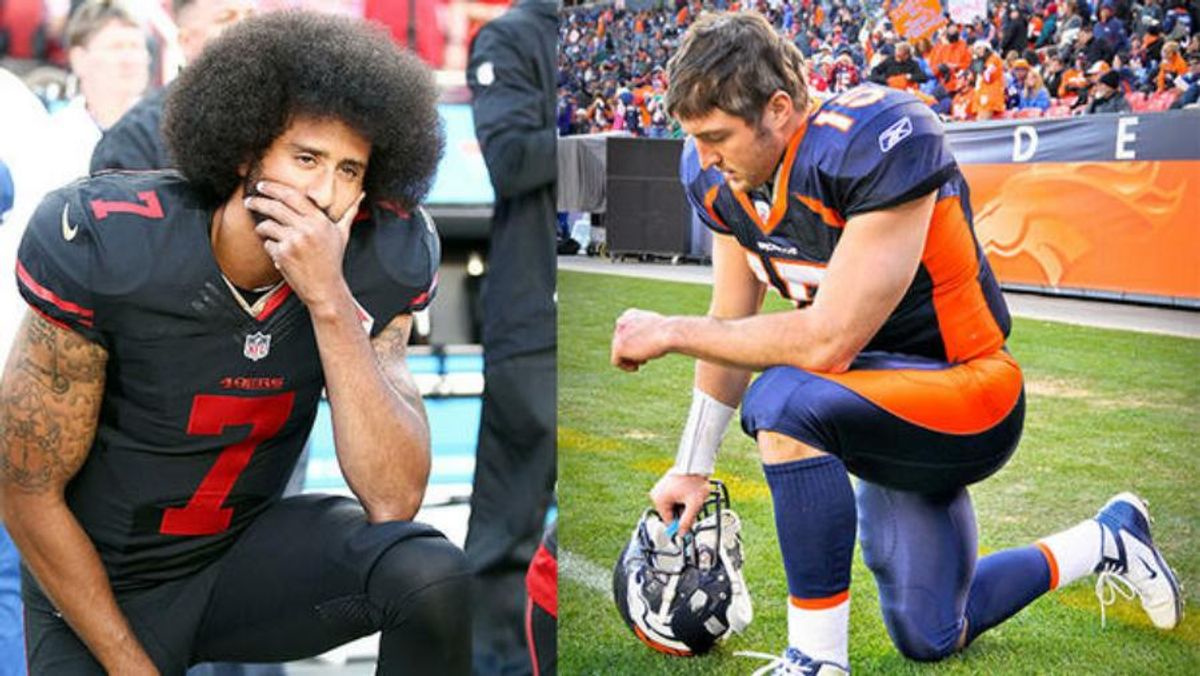 Claim:
Former NFL quarterback Tim Tebow knelt on the field during the national anthem as a protest against abortion.
Rating:

Former NFL quarterback Colin Kaepernick ("former" because he is a free agent currently unsigned by any NFL team) is most famous among football fans -- and a good many people who don't follow football at all -- as the one who kicked off a trend among NFL players in 2016 of refusing to stand to attention during the playing of the American national anthem prior to the start of games as a form of protest:

[Kaepernick's] body is festooned with religious tattoos, including depictions of scrolls, a cross, praying hands, angels defeating demons, terms like “To God be the Glory,” “Heaven Sent,” “God will guide me,” Psalm 18:39 and Psalm 27:3.

Kaepernick decided to either remain seated or kneel during renditions of the Star Spangled Banner in support of Black Lives Matter and to protest police violence against black people.

He explains, “I am not going to stand up to show pride in a flag for a country that oppresses black people and people of color. To me, this is bigger than football and it would be selfish on my part to look the other way. There are bodies in the street and people getting paid leave and getting away with murder.”

He vowed to continue to protest until he feels like “[the American flag] represents what it’s supposed to represent.”

You know what happened next, right?

Kaepernick was voted the “most disliked” player in the NFL.

People posted videos of them burning his jerseys.

He was called “an embarrassment” and “a traitor.”

He was blamed for a significant drop in NFL television ratings, with fans boycotting the NFL because of his protest. He received death threats.

Another former NFL quarterback, Tim Tebow ("former" because he is currently pursing a career as a professional baseball player), is perhaps best known for displaying his Christian faith on the gridiron, including his practice of kneeling in silent prayer on the field, a practice that came to be known as "Tebowing":

During his college football career, the Heisman Trophy winner frequently wore references to Bible verses on his eye black, including the ubiquitous John 3:16 during the 2009 BCS Championship Game.

He has been outspoken about his pro-life stance, and his commitment to abstinence from sex before marriage.

He has preached in churches, prisons, schools, youth groups and a welter of evangelical conferences.

And he is well known for his signature move — dropping to one knee on the field, his head bowed in prayer, his arm resting on his bent knee — known throughout the world as Tebowing.

So indeed, Colin Kaepernick and Tim Tebow are both former NFL quarterbacks who are outwardly religious and became household figures for kneeling on football fields. Although that last aspect (the kneeling) has sparked very different responses from the public in each case, that difference is not the hypocritical one that the following meme would have viewers believe: Tim Tebow's pro-life stance is well known, but he didn't "take a knee" during the national anthem. And when Tebow did kneel on the gridiron, his actions were those of private prayer conducted during incidental moments surrounding a game and not, as Colin Kapernick's were, a form of public protest purposefully tied to the playing of the U.S. national anthem.

Fans may, of course, disagree over how these two quarterbacks' extracurricular displays on the football field have been (or should have been) received by the public and by NFL officials, but the two cases had significant distinctions; they weren't equivalent actions that were hypocritically regarded in very different ways by different groups:

Tim Tebow and Colin Kaepernick are both famous for kneeling during football games, but in dramatically different contexts.

Regardless of whether you're more supportive of Kaepernick or Tebow, it's pretty misleading to compare society's reaction to either player without noting they kneeled in completely different contexts. If Tebow had taken to kneeling during the national anthem as a form of political protest, and especially as a form of protest against police officers, it's not a stretch at all to say people would have been upset with him as well.

That one player kneeled in prayer without the intentions of making an overt political statement while the other kneeled during the national anthem for an expressly political purpose is obviously an important detail to note when analyzing the public's responses to both.