Did a shoplifter who stashed a frozen chicken under her hat die of 'frozen brain'? 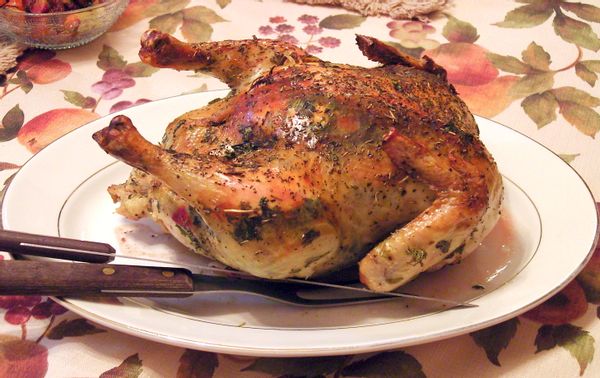 Claim:
Shoplifter who attempts to conceal a chicken under her hat is caught when the frozen loot renders her unconscious.
Rating:

In 1974, Swedish newspapers were fooled by reports of a male shoplifter who allegedly tried to make off with frozen poultry by stashing it under his hat and ended up hospitalized with "icing of the brain." There wasn't any such lad, though.

This telling marked the first appearance of the legend in print. How long prior to that the story had been circulating orally is anybody's guess, but a 1962 Reader's Digest article on supermarkets contained the following intriguing line: "Once a policeman lifted his cap, and a steak fell out." True, it lacks the 'frozen brain' or 'dripping blood' elements of what has come to be the common legend, but it does prove the lore about supermarket shoplifters hiding their booty under their hats was around that long ago.

We thrill to 'frozen chicken under the hat' stories because they confirm a world view we'd very much like to believe: that the misdeeds of bad guys will always come to light and the guilty will always be brought to justice. If such moral vindications can also be accomplished through the baddie's making a fool of himself, so much the better.

The prototype of the current legend comes from The Adventures of Huckleberry Finn, the 1885 novel by Mark Twain. In Chapter 40, Huck and Tom are about to creep out for a nighttime adventure when they realize they don't have the hunk of butter they'd set aside as part of their provisions. Tom goes to the cellar to get it, but is accosted by an unsuspecting Aunt Sally on the return trip. He hides the butter under his hat, hoping to quickly slip by her and be on his way. That is not to be, however — Sally whisks him into the parlor and makes him sit there under the scrutiny of others. In time, a streak of melted butter runs down from under his hat. Aunt Sally takes this as a horrifying sign of his having come down with 'brain fever' and panics at the thought of his brains "oozing out." The reality of Huck's theft comes to light when his hat is snatched off.

Another legend featuring a foodstuff mistaken for oozing brains is the popular Biscuit Bullet: A woman sits in her car in a supermarket parking lot holding her head. A passerby inquires if she needs help, to which the woman gasps that she needs a doctor — she's been shot in the head and can feel her brains oozing out. The oozing brains turn out to be dough fired from an overheated Pillsbury cannister.

One last "under the hat" legend deserves mention even if it doesn't fit all that closely with the theme:

A friend's dad is a desk sergeant in the West Midlands Constabulary. Although his job these days is a long way from the frontline in the fight against crime, in his younger days he pounded the beat around Handsworth.

This was well before the days of joyriders, ramraiders and serial killers; criminals in those days were an altogether nicer breed. At the time one of his colleagues had an interesting experience. The copper was patrolling a particularly ill-lit street. With his torch blazing, he flashed into each doorway and ginnel, weeding out the homeless and stopping every black BMW he saw, and generally keeping 'em peeled.

It was just as well, because his vigilance soon paid off. The flashlight illuminated the front of a cosy old tobacconist's with the door slightly ajar.

Steeling himself for possible violent confrontation, he slowly pushed open the door. Nothing appeared to be amiss, so radioing the station the flatfoot poked around the shop. Then he checked no one was looking and helped himself to 200 cigarettes, which he hid under his helmet.

The flustered shopowner arrived shortly, bursting with gratitude, and after checking his goods he praised the policeman's diligence and dedication to the job. Then he insisted on giving the officer a little 'thank you' for his trouble. 'Here, take these two hundred ciggies,' he offered.

'No, no, sir, that really won't be necessary. I'm only doing my job,' the bobby protested uncomfortably. 'Anyway, I don't have anywhere to put them.'

'Nonsense,' replied the shopkeeper, reaching up. 'You can hide them under your helmet.'