As the story goes, an apology letter to a wronged customer is marred by attached instructions to send the standard form letter. 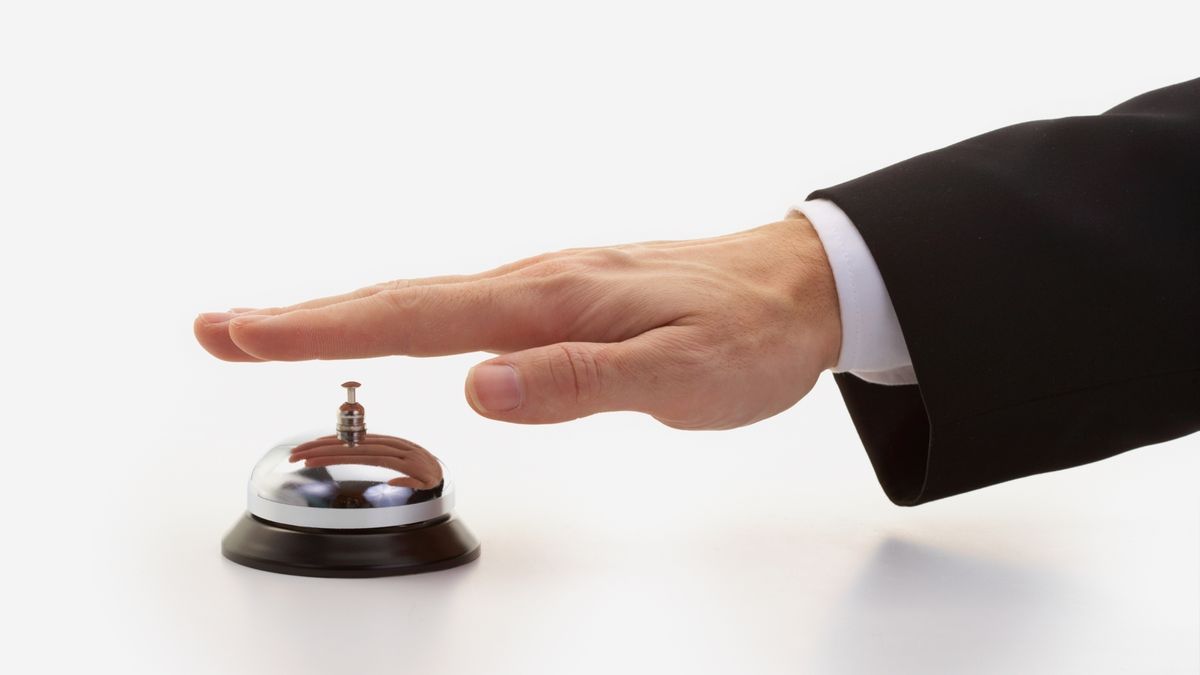 Claim:
Apology letter sent to a wronged customer is marred by attached instructions to send the recipient the standard grovel.
Rating:

The tale of the "bedbug letter," in which a complaining business customer receives a seemingly personalized and polite written apology in response to his correspondence — marred by the inadvertent inclusion of crude instructions from a manager to send the recipient "the standard SOB letter" — has been a part of contemporary lore since at least the 1920s, as these examples document:

I once asked a LAME in Cairns if the tropical climate caused any peculiar aircraft maintenance problems.

He thought for a moment and said, "Yes, cockroaches, because they thrive in all the hidden recesses despite blazing heat on the ground and chilly temperatures in flight, and can really make a mess."

Then he told me a story about a businessman who woke up some years ago on an international flight only to find a giant cockroach crawling down his cheek. He was so revolted by this that he filled in a complaint form about the incident and sent it off.

Some weeks later a letter from the airline's Public Relations Manager landed on his desk. It was an outstanding example of the practitioner's art and convincingly explained the airline's strict precautions against such pests before admitting that, in very rare circumstances, bugs did get on board their airliners, but when they did so, it was always somebody else's fault; the unhygienic dumps they had to land at, or when they had to rely on contractors for servicing, or when carried aboard in passenger's hand luggage.

Then to show how repentant the airline was, the PR manager invited the business man to present his letter at check-in when next he flew, when he would be automatically upgraded to first class.

After carefully filing the letter, the business man crumpled up the envelope and pitched it into the waste paper basket. As it landed he noticed something inside it. So he retrieved the envelope and withdrew one of the ubiquitous Post-it notes used nowadays to write messages in every office around the globe and apparently enclosed in error by the PR Manager's secretary.

It was his instruction to her to, "Just send this jerk the standard cockroach letter."

A wealthy gentleman was badly bitten by bugs while riding on a certain railway line. Arriving at his destination, he wrote the company an indignant letter and received a prompt reply. It was, said the letter, the first complaint the company had ever had of this nature. Inquiry had failed to reveal any explanation for this unprecedented occurrence. Nevertheless, a number of new precautions were being taken to make absolutely certain such an unfortunate incident never happened again. The letter was signed by a high official of the railway.

The gentleman was well satisfied with this reply and was returning it to the envelope when a slip of paper fell out onto the floor. The hastily scribbled note on it read: "Send this guy the bug letter."

It was a tiring journey to the capital of the Orange Free State and took us just twenty-six hours, so that we were weary folk when late at night on December 1st we found ourselves at Polley's Hotel. Travelling is not luxurious in South Africa — it is leather, not velvet — but all that any reasonable man could wish is to be found. Occasionally there is a plague of insects, but we were not molested much. It is recorded that one traveller, who had been badly bitten, sent a fierce complaint to the management, and received so courteous and conciliatory a letter in reply that he was quite soothed, until by chance a memorandum which was there fell out of the envelope, and he read: "Send this guy our bug letter."

Recurrent is the story, or perhaps it is the incident itself, of the gentleman who moved into a new apartment, to discover the presence of water bugs. He immediately dispatched a wrathful letter to the renting agent. In reply he received a lengthy communication in which the agent expressed his deepest grief, his intention of taking up the matter with the owner at once and his assurance that nothing remedial would be left undone. A careless secretary, however, had enclosed a note which read: "Miss Fraser, send this guy the bug letter."

Its age notwithstanding, the tale continues to update itself, with overnight travel by Pullman car replaced by long distance journeys by airplane, and paperclipped instructions upgraded to Post-It notes:

Did a real event spark off this legend? Possibly. Folklorist Jan Harold Brunvand reported on a 1992 letter from the corresponding secretary of the George Mortimer Pullman Encomium Society in which it was claimed the bed bugging took place on March 4, 1889, to a Mr. Phineas P. Jenkins, a salesman of pig-iron products. After spending a night in the company of far too many bedbugs (which in my book would number "one"), Jenkins penned a note of complaint to George M. Pullman, President of the Pullman Palace Car Company. In return, Jenkins supposedly received a wonderfully detailed and heartfelt apology from Pullman. Its effect was undermined, however, by the enclosure of his original letter, across which Pullman had handwritten "Sarah — Send this S! O! B! the 'bedbug letter.'"

An interesting related incident was recorded as a news story in November 2000: Ian Payne wrote the BBC to request a season of Jean Simmons films and the autograph of Lorraine Heggessey. He received back a short letter saying the BBC could not consider a Simmons season at this time, and attached to the letter was a Post-It note reading: "Nutter, polite fob off — no autograph." Whether the BBC actually sent Mr. Payne a letter with the described Post-It note attached (or whether the incident was contrived by the recipient or someone else in a case of pseudo-ostension) was never settled, as the BBC maintained it was unable to identify a possible culprit: "We have apologised unreservedly to Mr. Payne. We have tried to find out who wrote the post it note and we have compared the handwriting from the officers and we cannot find anybody's handwriting who matches it. We are mystified at this."

Another similar incident took place in September 2013, when a Seattle woman named Erin Boudreau e-mailed customer support at Postmates to complain about a service issue. Ms. Boudreau said she received a response (which she posted on Twitter) that included crudely-phrased instructions from Postmates CEO Bastian Lehmann about how her complaint should be handled: 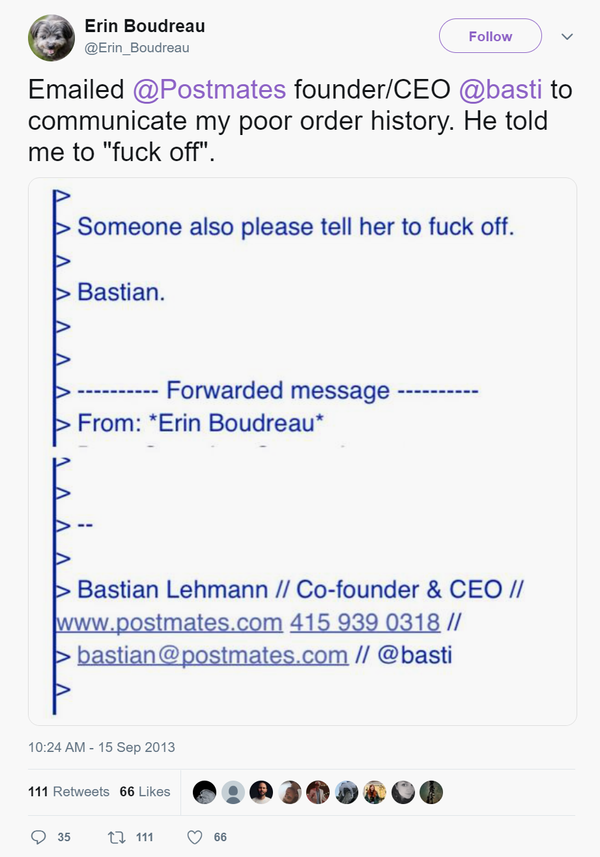 Mr. Lehmann subsequently posted an apologetic blog entry in which he referred to his message as a "bad joke":

Last night I sent a private e-mail to our Customer Service team in response to a customer complaint regarding her past orders and restaurant profile. My e-mail, which outlined how to resolve the customer issue, contained a bad joke which was very poor in taste. Subsequently, the bad joke was sent to the customer. What I said was a major lapse in judgement on my part. I deeply regret this.I immediately reached out to the customer and offered my full and sincere apology. I would like to extend that same apology to all of our customers and Customer Service team. There is no excuse for this.

Though this is not quite the bedbug story (a recurrent condition was not being passed off as a one-time occurrence), the element of a customer's written communication being responded to with a polite letter marred by the inclusion of a "send this gal a fob off note" (thus revealing the real sentiments behind the response) is close to it.

In July 2014 a redditor posted an image of apology letter sent by United Airlines in response to a complaint, showing that the letter was a template and the sender had neglected to customize the appropriate fields: 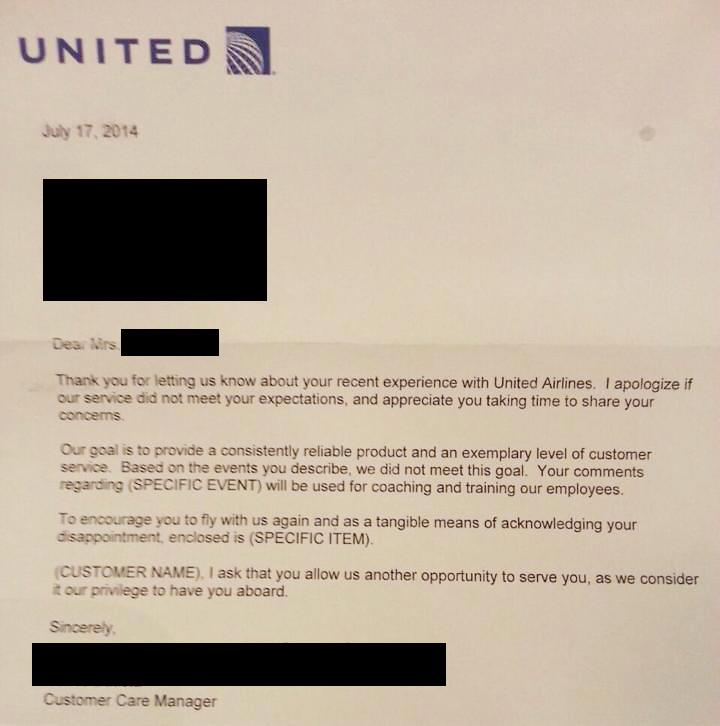