Was a Woman Sentenced to Five Years for Sending Her Son to a Better School?

Images contrasting the sentencings of white swimmers with that of homeless mother Tanya McDowell depicted perceived inequality in the criminal-justice system. 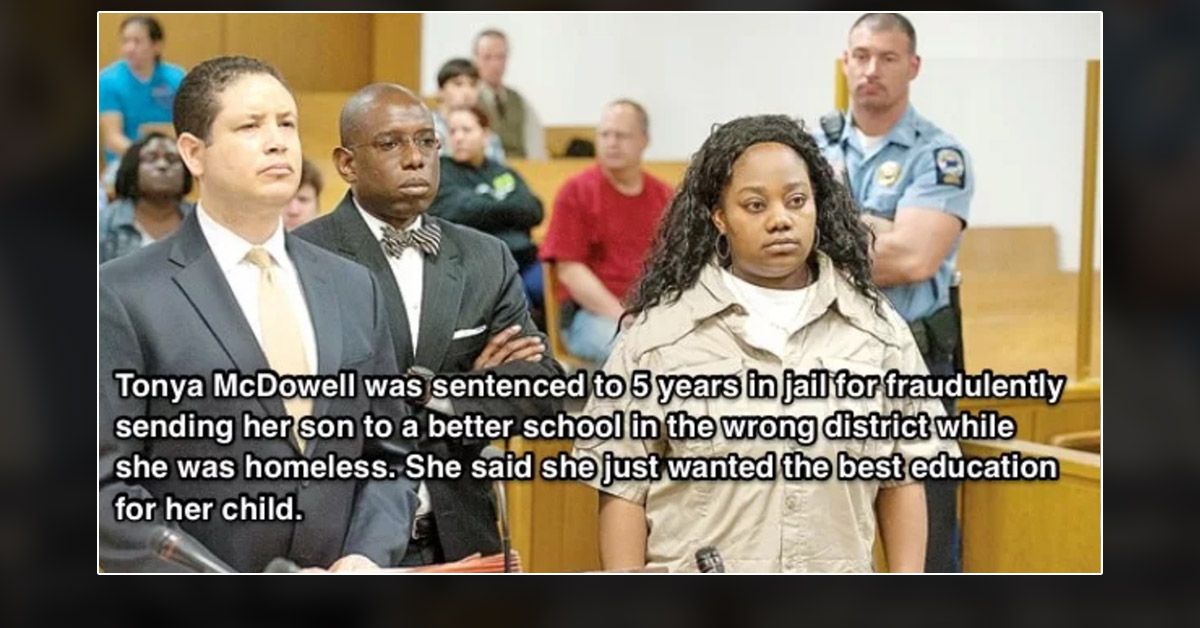 Claim:
Collegiate athletes were sentenced lightly for serious crimes while a homeless mother was sentenced to five years in prison for enrolling her son in the wrong Connecticut school.
Rating:

College athletes Brock Turner and David Becker received controversially light sentences for serious crimes in mid-2016, while Tanya McDowell was arrested in April 2011 on suspicion of larceny for enrolling her child in school during a period of reported homelessness and was subsequently sentenced to time in prison.

However, McDowell's sentence was not just for the school-larceny incident but for drug and prostitution charges, as well; all charges were ultimately disposed of in a single plea agreement.

In mid-August 2016, social media outrage over the light sentencing of collegiate athlete David Becker (who was sentenced to two years probation over sexual assault charges) led to the recirculation of images about a woman named Tanya McDowell, who was convicted of first-degree larceny for sending her child to the wrong school district: McDowell was arrested and charged with first-degree larceny and conspiracy to commit first-degree larceny in April 2011 after she allegedly falsified a residency affidavit and enrolled her young son at a Connecticut school. Initial reports described the arrest as an extreme and troubling outlier with respect to the severity of the charges levied.

On Facebook, users contrasted the respective sentences of Becker and swimmer Brock Turner (who received a six-month jail sentence after he was convicted of sexually assaulting an unconscious woman and was released after only serving three months) with McDowell's memetic circumstances, expressing frustration at what they considered to be justice clearly applied unfairly.

After McDowell's arrest was nationally reported, outrage ensued, and a petition was established online calling for the charges against her to be dropped. But larceny wasn't the only charge McDowell faced. In 2011, she was arrested again, this time on suspicion of attempting to sell to an undercover police officer drugs and the services of a prostitute.

McDowell was sentenced to five years in prison, five years' probation, and a 12-year suspended prison sentence after being convicted of first-degree larceny in the school case as part of a plea deal struck with prosecutors that included the drug and prostitution charges. Had she not taken the deal, McDowell could have faced decades in prison. At the time of her sentencing her attorney, David Crosland, expressed happiness with the resolution of the case.

The McDowell case was raised again in 2019 in comparisons to the celebrity college-admissions scandal, as an example of perceived unequal sentencing meted out according to class and race, although most failed to take into account that McDowell's sentencing was the result of a plea bargain in which she was given a lighter sentence than she could have faced had she proceeded to trial.

[UPDATE 04/29/19]: This story has been updated from a "mixture" rating to "true" to reflect that McDowell was indeed sentenced to 5 years for larceny charges related to sending her child to the wrong school district, and that it was the result of a plea deal.

[UPDATE 09/19/19]: This story has been updated and returned to a "mixture" rating to better reflect the claim that McDowell was sentenced to 5 years in the school larceny case, but that the sentence included drug and prostitution charges, as well. The body of the story also has been updated to more clearly explain the totality of her sentence on those charges under a single plea agreement.