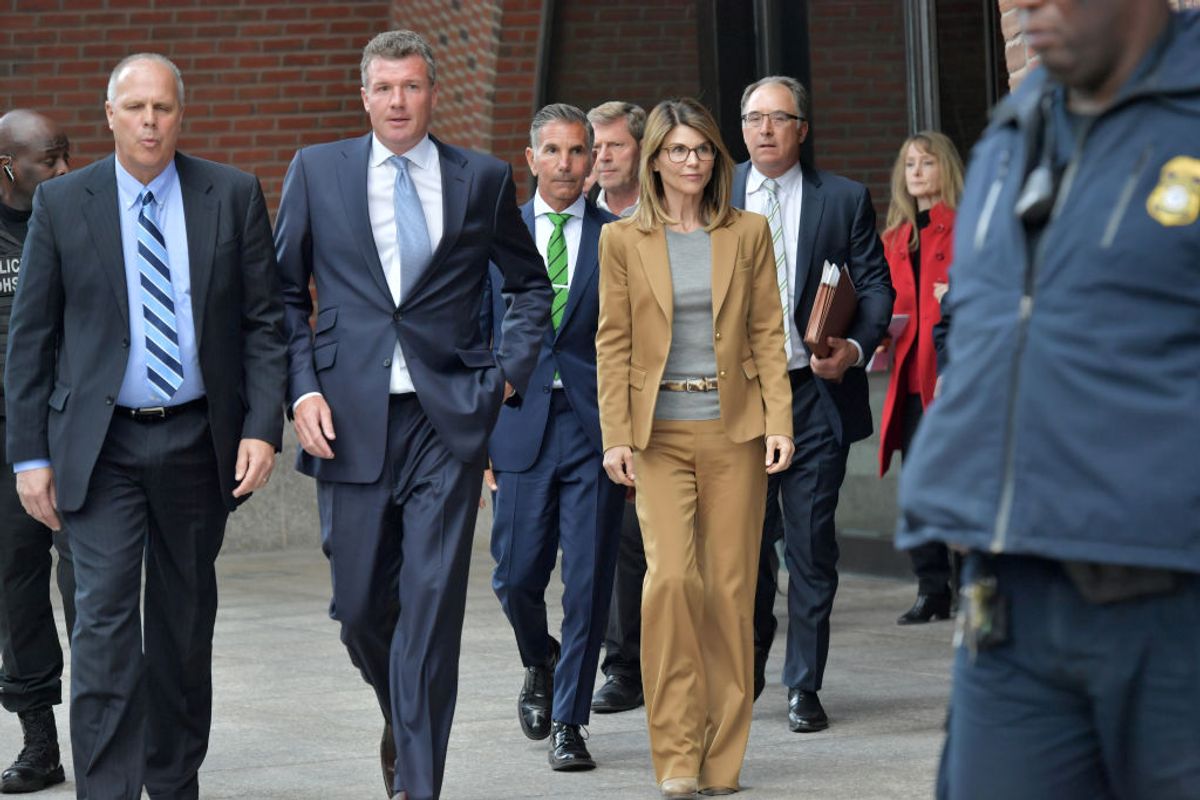 In April 2019, social media users circulated images of wealthy celebrities accused of bribing their children into elite colleges alongside those of two African-American mothers who had previously been sent to prison for enrolling their children in the wrong public school districts. Among the celebrities charged in the college case were actresses Felicity Huffman and Lori Loughlin.

It's not the first time criminal proceedings brought against African-American defendants were used for comparison amid controversy over the perception of lenient treatment by authorities of wealthy, white defendants. In 2016, many compared what some considered light sentences in the sexual-assault cases of college athletes Brock Turner and David Becker with the five-year prison term meted out to Tanya McDowell, a homeless Connecticut woman convicted of larceny after sending her son to a school district that neighbored her last known address, along with drug and prostitution-related charges.

Turner served three months of a six-month sentence in jail. Becker was given two years probation.

The college-admissions scandal, which has been playing out in the early months of 2019, raised similar comparisons. Although none of the wealthy defendants has yet been sentenced, some people were quick to jump on reports that Huffman could receive either home confinement in lieu of jail or no jail at all in a plea deal offered by prosecutors.

Huffman pleaded guilty to paying a Harvard graduate $15,000 to correct answers on her daughter's SAT exam, thus boosting her score. A legal expert consulted by The Los Angeles Times, however, said Huffman could receive a light sentence because she was one of the first parents of dozens of defendants accused in the bribery scheme to plead guilty and express remorse, setting an example for others.

Loughlin, on the other hand, could face a much stiffer penalty after reportedly refusing a plea bargain offered by prosecutors. Loughlin and her husband, fashion designer Mossimo Giannuli, now face 20 years in prison if convicted of charges that they gained admission for their daughters to the University of Southern California by falsely claiming they were crew athletes, along with fraud and money-laundering counts.

Many people shared memes juxtaposing images of affluent celebrities like Huffman and Loughlin with those of McDowell and Kelley Williams-Bolar, another African-American mother convicted of using her father's address to send her daughters to a district with better-performing schools in Ohio. In 2011, Williams-Bolar was jailed for 10 days, sentenced to three years probation and fined $70,000. She was convicted of grand theft and tampering with evidence. McDowell, who was also arrested in 2011, spent five years in prison and was given a 12-year suspended sentence and five years probation.

Although it's messy to compare different, individual criminal cases comprised of different charges in different jurisdictions, studies show that racial and class inequity exist in the criminal justice system. A 2017 study by Loyola Law School demonstrated that black defendants with no criminal histories received harsher punishments in plea bargains than their white counterparts. African-Americans are also disproportionately more likely to be impacted by mass incarceration. In 2017, the United Nations cautioned that globally, the death penalty is largely reserved for the poor, while research shows racial disparities in capital punishment sentencing in the U.S.

In an interview, Williams-Bolar on 15 March 2019 weighed in on the "Today" show, addressing comparisons between the cases by saying, "The socioeconomic backdrop is completely different. It’s two different cases — absolutely. And they [celebrities] definitely were all about the status. But we’re all moms. Mothers want good education for their kids. That’s what we have in common."

Pflum, Mary. "Mom Jailed for Lying to Get Kids in Better School Speaks Out on College Scandal."   Today. 15 March 2019.

Edwards, Ashlee Alese. "This Mom Went to Prison for Enrolling Her Son in a School Outside Her District."   Refinery29. 15 March 2019.