Did Taliban Hang a Man From a Black Hawk Helicopter?

This person is hanging from a harness, not a neck. 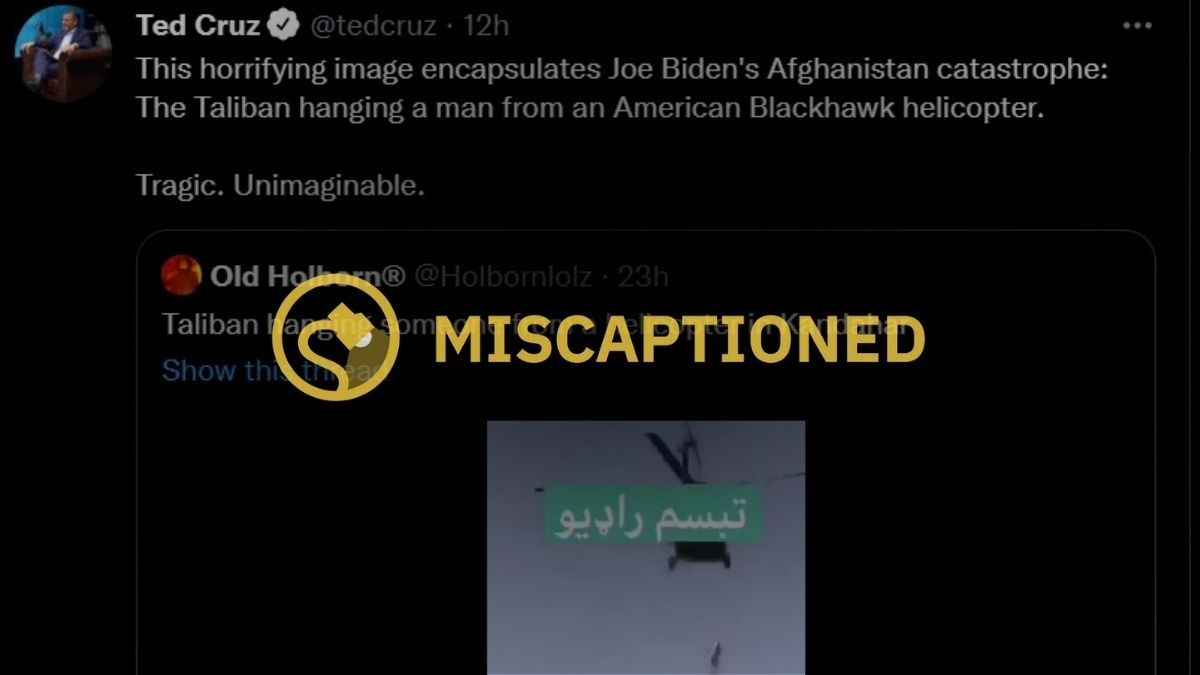 Claim:
A video shows an American interpreter being hanged from a Black Hawk helicopter flown by the Taliban.
Rating:

This video is real (although its date is unclear), but it does not show a person being hanged. It shows a person in a harness who can be seen waving to people on the ground.

In late August 2021, a video started circulating that supposedly showed the Taliban hanging a traitor by the neck from a rope beneath a Black Hawk helicopter seized after the U.S. withdrawal from Afghanistan:

This video first went viral on Aug. 30, 2021, when it was shared by the Taliban Times, an English language account for the Islamic Emirate Afghanistan, along with a message celebrating America's withdrawal from Afghanistan.

The Taliban Times wrote: "Our Air Force! At this time, the Islamic Emirate's air force helicopters are flying over Kandahar city and patrolling the city."

Usama Mohammadi (@UMohmmadi), a supposed journalist for the Islamic Emirate, also shared some photographs of this scene. Again, Mohammadi shared these pictures with messages celebrating the Taliban's acquisition of U.S. military equipment, such as Black Hawk helicopters. (You can read more about the military equipment the Taliban took control of after America's withdrawal here.)

Mohammadi wrote: "Our Air Force ♥ We will be the owners of advanced military equipment in the future! All that is needed is unity and solidarity!"

While this video originated with messages of celebration, not messages about an execution, many people claimed (without evidence) that the video showed the Taliban hanging someone from the helicopter. Some went as far as to claim (without any evidence) that this person was an American interpreter.

This is not true. The person in this video is not being executed by hanging but is wearing a harness, is alive, and can be seen waving to people on the ground. Bilal Sarwary, a freelance Afghan journalist, posted on Twitter that the video showed a pilot who had been trained by the US and United Arab Emirates and a Taliban soldier attempting to install a flag from the air. The mission was not a success. Another video gives an even better look at the harness, which wraps under the arms, not around the neck. Here's a still from that piece of footage: Another point of contention relating to this footage is whether it shows a Black Hawk helicopter. The United States left a lot of military equipment behind when it withdrew from the area, but many of the planes and helicopters were demilitarized and should have been unusable. While not speaking specifically about Black Hawk helicopters, Gen. Kenneth F. McKenzie said the military demilitarized 73 aircrafts before leaving.

This video, however, appears to show a Black Hawk helicopter that was previously being used by Afghan Air Force. You can see a comparable picture here that features the same triangle symbol used by Afghan forces.

It's possible that this video was taken before the Taliban's takeover of the area. Or, it could show that Taliban have at least one working Black Hawk helicopter. The U.S. Department of Defense has not yet commented on this video.

No, the Taliban Did Not Just Hang an Interpreter From a US Helicopter. https://www.vice.com/en/article/88n3bv/no-the-taliban-did-not-just-hang-an-interpreter-from-a-us-helicopter. Accessed 31 Aug. 2021.