Did US Leave More Than $80B Worth of Equipment to the Taliban?

The "Taliban's New Arsenal" does not include 22,000 Humvees or 33 Black Hawk helicopters. 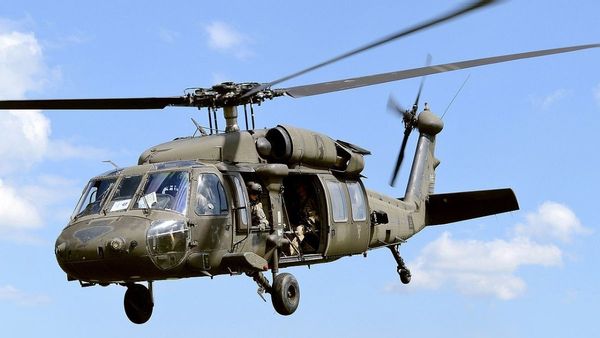 Claim:
The United States withdrawal from Afghanistan put more than $80 billion worth of equipment — including 22,174 Humvees and 33 Black Hawk helicopters — in the hands of the Taliban.
Rating:

It's true that over a span of 20 years, the U.S. spent more than $80 billion to train and equip military forces in Afghanistan. However, this number does not reflect the value of the equipment that was left behind after America's withdrawal from the area. Billions of dollars worth of equipment was removed or demilitarized by the U.S. military before leaving Afghanistan. An exact accounting of the military equipment currently in the Taliban's hands is not available, though one expert estimated that the total value was closer to $10 billion.

In August 2021, shortly after the Taliban seized power in Afghanistan following the United States military's withdrawal, photographs and videos started circulating online that showed Taliban forces holding American-made weapons. While it is true that American-made vehicles, weapons, and other supplies have fallen into the Taliban's hands, the value of this equipment has been wildly exaggerated as rumors and memes circulated on social media.

Did the Taliban Acquire $80 Billion Worth of Military Equipment?

One persistent claim is that the Taliban captured more than $80 billion worth of American military equipment. This is not true. A viral meme claims the U.S. left more than $80 billion worth of weapons behind in Afghanistan, calling it the "Taliban's new arsenal."

The $80 billion figure does not reflect the amount of equipment acquired by the Taliban after America's withdrawal from Afghanistan. Rather, this number reflects the amount of money the United States spent to train and equip military forces in Afghanistan over the previous two decades.

"The U.S. provided an estimated $83 billion worth of training and equipment to Afghan security forces since 2001. This year, alone, the U.S. military aid to Afghan forces was $3 billion.

Putting price tags on American military equipment still in Afghanistan isn’t an easy task. In the fog of war – or withdrawal – Afghanistan has always been a black box with little sunshine."

The majority of this money was spent on items other than military equipment (such as salaries and training) so it's simply not possible for the value of the equipment that Taliban received to be worth more than $80 billion. According to a report from the Special Inspector General for Afghanistan Reconstruction (SIGAR), about $18 billion was spent on equipment and transportation between 2005 and 2021.

John Pike, director of GlobalSecurity.org, told Politifact that the Taliban likely obtained less than $10 billion worth of equipment.

Many of the claims about how much equipment the Taliban took over after America's withdrawal center on a graphic entitled "Taliban's New Arsenal." This misleadingly titled graphic was created by the the UK newspaper The Times. This graphic does not show the amount of equipment acquired by the Taliban. Rather, it shows the sum total equipment that was provided to Afghan military forces over the last 20 years. This graphic does not account for equipment that has been used or fallen into disrepair. It also doesn't account for the equipment that was removed from the country, disabled, or destroyed.

The 22,174 Humvees listed in this graphic comes from a US Government Accountability Report detailing the amount of hardware giving to Afghan forces between 2003 and 2016. The BBC reported:

Between 2003 and 2016, the US unloaded a huge amount of military hardware on the Afghan forces it fought alongside: 358,530 rifles of different makes, more than 64,000 machine guns, 25,327 grenade launchers and 22,174 Humvees (all-terrain vehicles), according to the US Government Accountability Report.

The U.S. Military Did Not Leave Everything Behind

For equipment that couldn't be moved out of country, they tried to destroy or disable it. Gen. Kenneth McKenzie, the head of U.S. Central Command, said during a press conference on Aug. 30, 2021:

What About Black Hawk Helicopters?

The BBC reported that Afghan forces had 167 operational aircraft — including 33 Black Hawk helicopters — in June 2021. It appears that many of these aircrafts were moved out of country, however, and are not currently in the hands of the Taliban.

The Afghan Air Force was operating 167 aircraft, including attack helicopters and planes, at the end of June, according to a report by the US-based Special Inspector General for Afghanistan Reconstruction (Sigar).

But it's unclear how many of those 167 the Taliban have actually captured. Satellite images of Kandahar airport, given to the BBC by Planet Labs, show a number of Afghan military aircraft parked on the tarmac.

An image from six days after the city was taken over by the Taliban shows five aircraft - at least two MI-17 helicopters, two Black Hawks (UH-60) and a third helicopter which could also be a UH-60, according to Angad Singh, a military aviation expert at Delhi-based Observer Research Foundation.

In contrast, 16 aircraft - including nine Black Hawks and two MI-17 helicopters and five fixed-wing planes - could be seen in another satellite image taken on 16 July.

It means that some of these aircraft were either flown out of the country or moved to other airbases.

Joost Oliemans and Stijn Mitzer, military analysts and authors of The Armed Forces of North Korea, write that the Taliban likely acquired 10 Black Hawk helicopters, all of which were reportedly disabled U.S. forces:

So What Equipment Did the Taliban Acquire?

The Taliban truly did get their hands on plenty of American weapons and vehicles, but a precise accounting of this equipment is not currently available. What we can say is that many of the rumors circulating about the Taliban's haul deal with sum totals over the course of 20 years, not the amount that was actually left behind.

The Taliban's new arsenal does not include $80 billion in military equipment, 22,000 Humvees, and 33 Black Hawk helicopters. At the moment, it appears that the Taliban actually acquired 10 inoperable Black Hawk helicopters, about 2,000 vehicles (many of which were demilitarized), and a number of other weapons totaling less than $10 billion.

“How US Deactivated Hundreds of Planes, Rockets and Artillery before Leaving Afghanistan.” DNA India, 31 Aug. 2021, https://www.dnaindia.com/world/report-us-disables-70-mrap-armored-tactical-vehicles-27-humvees-before-leaving-kabul-airport-2908687.

Kabul, Charlie Faulkner. What Will Happen to Afghans Now the Taliban Are in Charge? www.thetimes.co.uk, https://www.thetimes.co.uk/article/what-will-happen-to-afghans-now-taliban-education-women-kabul-explained-ms9v7jsm9. Accessed 31 Aug. 2021.

“The Military Is Literally Throwing Away $7 Billion in Afghanistan.” The Week, https://theweek.com/articles/462962/military-literally-throwing-away-7-billion-afghanistan. Accessed 31 Aug. 2021.

Trevithick, Joseph. “Everything We Know That The U.S. Military Left Behind At Kabul Airport.” The Drive, https://www.thedrive.com/the-war-zone/42197/heres-what-the-u-s-military-left-behind-at-kabul-airport. Accessed 31 Aug. 2021.

Washington, District of Columbia 1100 Connecticut Ave NW Suite 1300B and Dc 20036. “PolitiFact - No Proof Biden Left Taliban $80B in Weapons, or That He Wants Americans’ Pistols.” @politifact, https://www.politifact.com/factchecks/2021/aug/20/viral-image/no-proof-biden-left-taliban-80b-weapons-or-he-want/. Accessed 31 Aug. 2021.