Yes, YouTube Ads Mistakenly Reappeared for 'The Rise of Skywalker'

Don't worry. You haven't traveled back in time and you won't have to relive 2020 all over again. 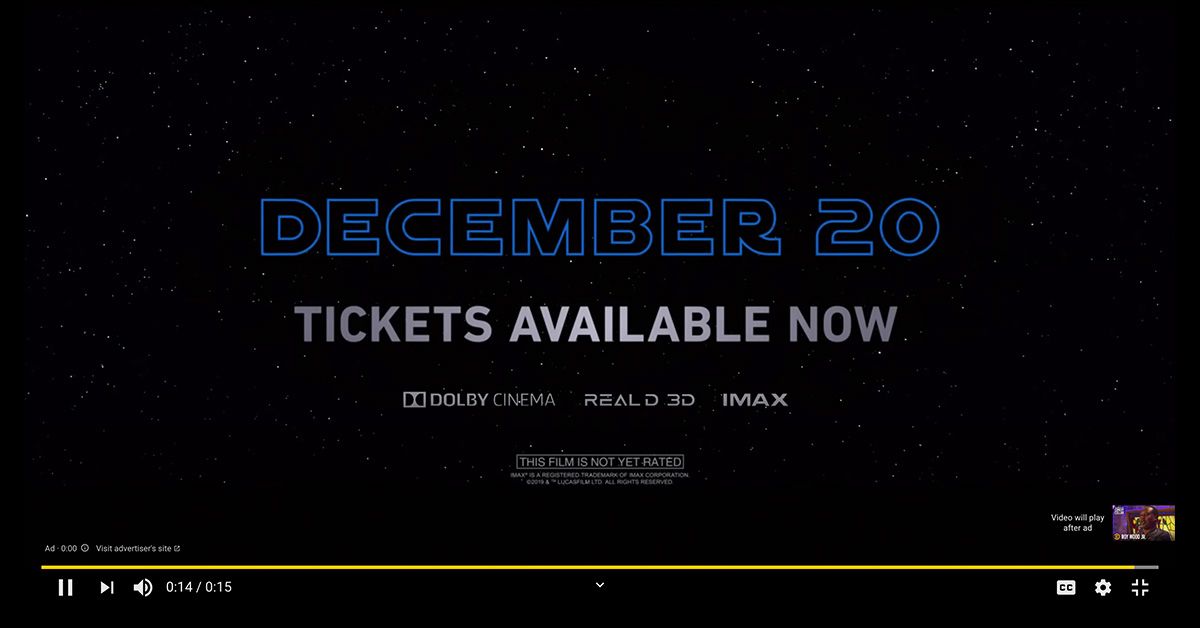 Image Via YouTube, Screen capture
Previous Article
Next Article
Article 13 of 19 in Collection

Claim:
"Star Wars: The Rise of Skywalker" is rereleasing in movie theaters on Dec. 20, 2020.
Rating:

On Nov. 23, 2020, Twitter users reported seeing advertising on YouTube videos for "Star Wars: The Rise of Skywalker." A voice-over in the 15-second video ads began with "this Christmas" and ended by saying "tickets available now," with Dec. 20 displayed as the release date. The ninth chapter in the Star Wars saga was originally released one year earlier, on Dec. 20, 2019, and is often referred to by fans as "TROS."

Understandably, some fans were confused upon seeing the outdated ad:

However, "Star Wars: The Rise of Skywalker" is not rising again in movie theaters on Dec. 20, 2020. The resurgence of the "Star Wars: Episode IX" YouTube ads appeared to be a mistake. While the reason for the 2019 ads reappearing in 2020 is unknown, it's possible that in 2019 some YouTube ads for the film were scheduled to run with the wrong year. In November 2019, "Star Wars: The Rise of Skywalker" was being advertised to sell tickets for the film's release.

Watch the resurrected ad below:

Disney and Lucasfilm have not yet commented on the matter, and the ads were still running as of the morning of Nov. 24, 2020.

Previous Article
Next Article
Article 13 of 19 in Collection