Did George Soros Pay 'March for Our Lives' Protesters $300 Each?

As hundreds of thousands of students and supporters took to the streets to protest gun violence, conspiracy theorists blamed a familiar bogeyman. 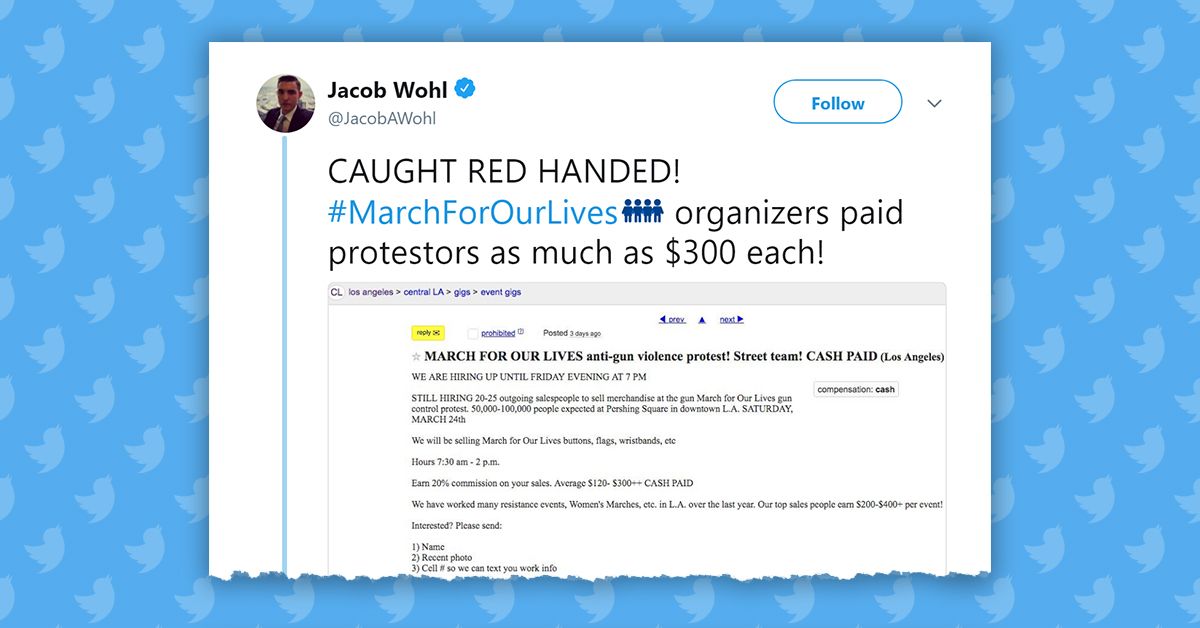 Hundreds of thousands of people turned out across the United States on 24 March 2018 to participate in March for Our Lives, a grassroots protest against gun violence organized primarily by students moved to action as a result of recent mass school shootings that left dozens of innocent victims dead and injured.

Within a day of the nationwide marches, conspiracist web sites began trumpeting the claim that organizers working for billionaire George Soros had paid protesters $300 apiece to march and carry signs for the event. A report on YourNewsWire.com, for example, cited tweets by conservative Twitter personality Jacob Wohl purporting to provide evidence that the marches weren't as "grassroots" as they appeared:

#MarchForOurLives organizers paid protestors $300 each to attend the March 24 protest in Washington, D.C, according to reports.

“Here’s just one of many of the Craigslist ads where Soros Organizers were recruiting PAID protestors for #MarchForOurLives ! Don’t expect the MSM to talk about this,” the Editor In Chief for The Washington Reporter tweeted.

Wohl's tweets contained screenshots of the Craigslist ads he claimed were used to solicit paid protesters:

CAUGHT RED HANDED! #MarchForOurLives organizers paid protestors as much as $300 each! pic.twitter.com/AybRum0gCP

Although the ads are authentic (we found additional examples targeting other U.S. cities where marches were planned), they clearly weren't soliciting paid protesters. On the contrary, they offered temporary sales positions to those interested in hawking march-related merchandise for a 20 percent commission:

WE ARE HIRING UP UNTIL FRIDAY EVENING AT 7 PM

We will be selling March for Our Lives buttons, flags, wristbands, etc

We have worked many resistance events, Women's Marches, etc. in L.A. over the last year. Our top sales people earn $200-$400+ per event!

Thanks! We will update you work details via text message on Thursday evening!

A Google search turned up related ads (no longer extant as of this writing) soliciting managers for these sales teams, as well as for teams hired to sell merchandise at a "March for Science" event to be held the following month: The content of the ads suggests they were placed by a third party (presumably a contractor), not by event organizers, and were intended to make a buck off of events sure to draw large crowds, not to recruit paid participants in those events. And nothing in their wording indicates a connection with George Soros or any of his organizations devoted to social activism.

Wohl reported in a follow-up tweet that when he answered one of the Craigslist ads, he received a response saying that although the sales positions had been filled, he could receive $50 for expenses if he chose to participate in the march:

"Hi Jacob,
Thanks for your offer to help us at #MarchForOurLives. Unfortunately we don't need anymore merch staff, but if you come to participate in the march, we can arrange to Venmo you $50 for your lunch and travel expenses." pic.twitter.com/RS67DmzuKN

We note, however, that an offer of $50 to cover food and expenses does not prove Wohl's original claim that individuals were paid up to $300 each to protest. Moreover, we find it doubtful that a significant portion of the estimated 800,000 protesters who turned out in Washington, D.C. (to name just one city where a march took place) did so in response to a Craigslist solicitation for salespeople. (At $300 per protester, if only a quarter of the D.C. marchers turned out for the money, someone would have had to be prepared to shell out $60 million in cash.)

This is not the first time (nor do we expect it to be the last) that partisan groups have tried to discredit protesters by circulating claims that they were paid to show up. It was alleged without proof in March 2016, for example, that protesters who clashed with Donald Trump supporters at a Chicago event were political operatives hired via Craigslist ads soliciting "troublemakers" and paid by George Soros. Similar allegations circulated in the wake of Black Lives Matter demonstrations in 2015 and 2016. But although Soros-sponsored organizations have had a hand in promoting and supporting any number of progressive groups and social causes over the years, no evidence documents that the billionaire himself or his philanthropic entities have directly instigated or funded public protests, and to claim that these Craigslist ads are proof of just that earns this a rating of False.