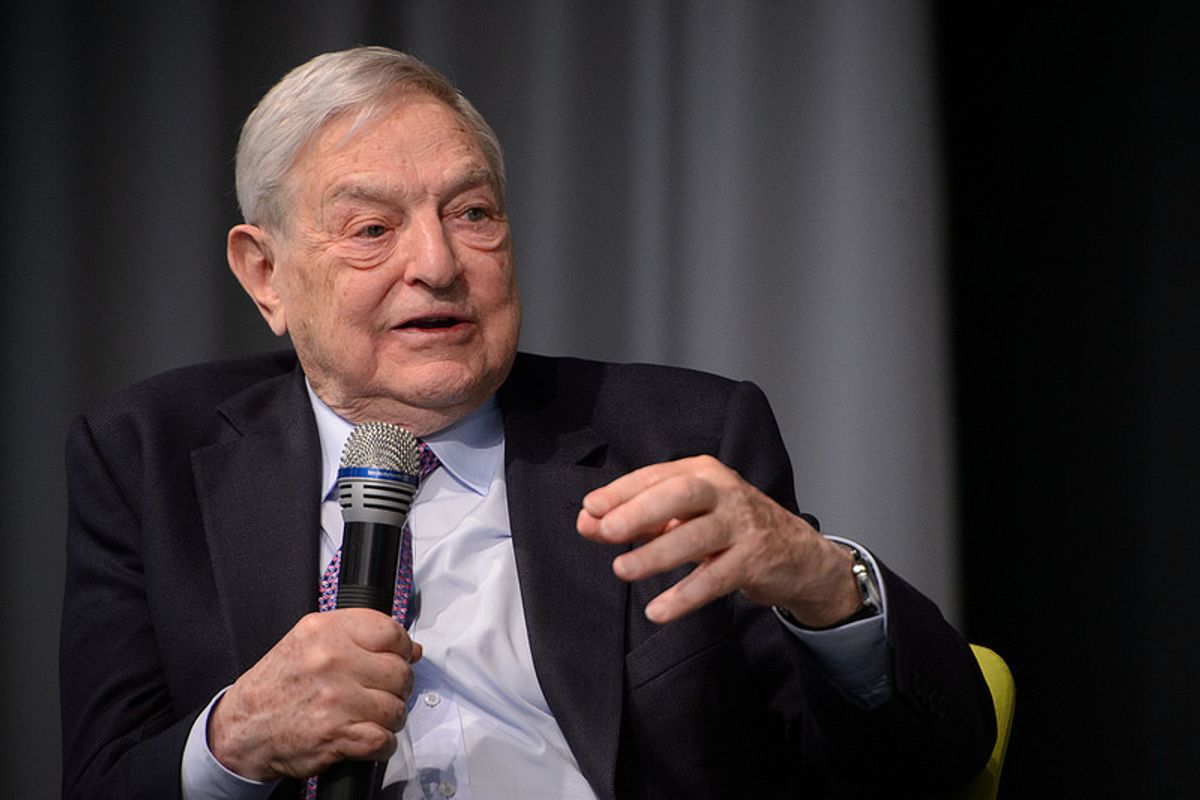 A grantmaking network founded by George Soros provided funding to some groups that engaged in Ferguson-related protest activities.

George Soros did not give money to various groups for the express purpose of promoting Ferguson-related protests and riots.

The Hungarian-born multi-billionaire business magnate and philanthropist George Soros has in recent years acquired a mythos rivaling that of the Rosicrucians, the Illuminati, and the Trilateral Commission: a shadowy mastermind who wields tremendous wealth and influence to furtively manipulate events worldwide in furtherance of a conspiracy for establishing a
New World Order. Various rumors have claimed Soros controls everything from the international illegal drug trade to gun manufacturers to this very web site (snopes.com).

Added to that list in January 2015 was a rumor Soros had "sponsored" or "bankrolled," to the tune of some $33 million, protesters who rioted after the fatal shooting of Michael Brown by a police officer in Ferguson, Missouri, on 9 August 2014.

The rumor stemmed from Soros' connection with the Open Society Foundations (OSF), a progressive-liberal grantmaking network he founded (as the Open Society Institute) in 1993 to fund civil society groups around the world. The OSF's Mission & Values statement describes the network's purpose thusly:

The Open Society Foundations work to build vibrant and tolerant societies whose governments are accountable and open to the participation of all people.

We seek to strengthen the rule of law; respect for human rights, minorities, and a diversity of opinions; democratically elected governments; and a civil society that helps keep government power in check.

We help to shape public policies that assure greater fairness in political, legal, and economic systems and safeguard fundamental rights.

We build alliances across borders and continents on issues such as corruption and freedom of information.

Working in every part of the world, the Open Society Foundations place a high priority on protecting and improving the lives of people in marginalized communities.

The OSF has nodes in over 60 different countries and has funded a wide range of initiatives all over the world, including:

According to various alarmist reports, Soros himself virtually single-handedly enabled and promoted protests connected with the Ferguson shooting because some of the groups involved (tangentially or otherwise) with activism-related events received some portion of their funding from the OSF network:

In all, Mr. Soros gave at least $33 million in one year to support already-established groups that emboldened the grass-roots, on-the-ground activists in Ferguson, according to the most recent tax filings of his nonprofit Open Society Foundations.

The financial tether from Mr. Soros to the activist groups gave rise to a combustible protest movement that transformed a one-day criminal event in Missouri into a 24-hour-a-day national cause celebre.

Other Soros-funded groups made it their job to remotely monitor and exploit anything related to the incident that they could portray as a conservative misstep, and to develop academic research and editorials to disseminate to the news media to keep the story alive.

But taking that information and converting it into the assertion Soros himself funded Ferguson-related protests and riots is problematic for a number of reasons. Although George Soros is the founder and chairman of OSF, he quite obviously does not personally oversee and approve every single grant made by the OSF network to the multitude of organizations and programs that the network helps to fund. As well, the $33 million figure includes just about every organization with any connection to Ferguson-related activism that received monies from the OSF network, even if their involvement was tangential (such as publishing, writing, or promoting hashtags about the issue). And that such groups may have received part of their funding from the OSF network doesn't mean those funds were given for the specific purpose of organizing Ferguson-related protests, or with the knowledge or intent they would be used thusly.

As Kenneth Zimmerman, director of OSF's U.S. Programs observed, some of the groups involved have been receiving OSF funding since long before the Ferguson shooting was a political issue, and the OSF itself did not promote or direct Ferguson-related protests:

Mr. Zimmerman said OSF has been giving to these types of groups since its inception in the early '90s, and that, although groups involved in the protests have been recipients of Mr. Soros' grants, they were in no way directed to protest at the behest of Open Society.

"The incidents, whether in Staten Island, Cleveland or Ferguson, were spontaneous protests — we don't have the ability to control or dictate what others say or choose to say," Mr. Zimmerman said. "But these circumstances focused people's attention — and it became increasingly evident to the social justice groups involved that what a particular incident like Ferguson represents is a lack of accountability and a lack of democratic participation."

New versions of these stories appeared as Black Lives Matter became more heavily covered during 2015 and 2016, growing to encompass not just the protest in Ferguson, but every protest in which BLM was involved.