Did Sarah Jeong Tweet That She Hopes 'Bald White Kids' Have Leukemia?

A series of fake tweets have been created and circulated in order to denigrate New York Times journalist Sarah Jeong. 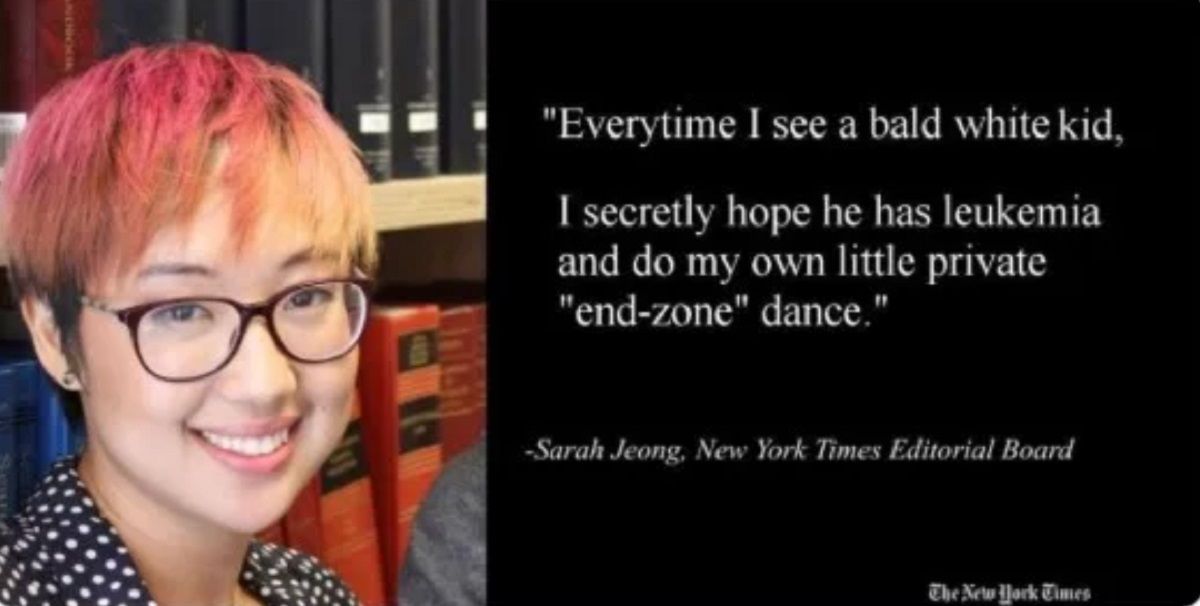 Claim:
Journalist Sarah Jeong once tweeted that every time she sees a "bald white kid" she secretly hopes "he had leukemia."
Rating:

In August 2018, a number of years-old tweets posted by journalist Sarah Jeong were dug up and re-shared on the internet in an attempt to show that the newest member of The New York Times' editorial board exhibited a pervasive (anti-white) racial bias:

Once Jeong’s hiring was announced, her detractors immediately started digging through her internet history to see what they could find. A survey of Jeong’s past commentary on Twitter reveals several mainly sarcastic tweets dating back to 2013, which were largely discussing and responding to the oppressive mentality of white culture.

In tweets like the one embedded above, Jeong appeared to be commenting on the idea that white people often believe they are being discriminated against when they aren’t. To equate “being mean to white people” with the actual systemic oppression and marginalization of minority groups is a false equivalency.

Although similar campaigns had resulted in the firings of people such film director James Gunn, the New York Times stuck by their decision to hire Jeong. The controversy slowly faded from the national spotlight, but Jeong remained a target of political trolls.

In mid-October 2018, a tweet supposedly posted by Jeong popped up on social media and was pushed by disreputable Twitter accounts with a history of promoting debunked conspiracy theories and spreading alt-right propaganda: This statement ("Everytime i see a bald white kid, i secretly hope he has leukemia and do my own little private 'end-zone' dance") does not currently appear on Jeong's Twitter timeline, nor did we find any record of it in Jeong's online articles.

Social media users dredged through Jeong's social media accounts for similar controversial messages in August 2018. Although these internet investigators dug up dozens of genuine posts which they deemed to be problematic, such as the #Cancelwhitepeople" message seen above, those examples apparently weren't damaging enough for some internet trolls. Soon, 4Chan users started to create fabricated racist posts which they then falsely attributed to Jeong.

We found a number of these fabricated posts in 4chan threads from early August 2018 (including one about a "castration lottery"), most of which featured the same template as the fake "leukemia" quote: a picture of Jeong with pink hair next to a black space containing the alleged quote, Jeong's name, and her position at the New York Times: These fake statements were often met by commentators questioning their authenticity, asking for verification, or chastising the poster for spreading false material. One of the earliest postings of the fake "leukemia" quote was accompanied by the following comments:

Jeong's detractors took screenshots and archived the problematic tweets in case the journalist decided to later delete them, yet we found no record of Jeong's making this "leukemia" tweet. That message was conjured out of thin air in an attempt to stir racial discord and discredit Jeong and the New York Times.

Jeong herself labeled the message a "fake tweet" on 15 October 2018:

it's amazing that someone, replying to a news story about politically motivated sockpuppets, ginned up a fake tweet attributed to me https://t.co/4E5T2nfq4c pic.twitter.com/oXsST2IfUV