Was DNC Worker Seth Conrad Rich Gunned Down on His Way to Meet the FBI?

A conspiracy site latched on to the tragic murder of young DNC staffer Seth Rich to spread false information about his killing. 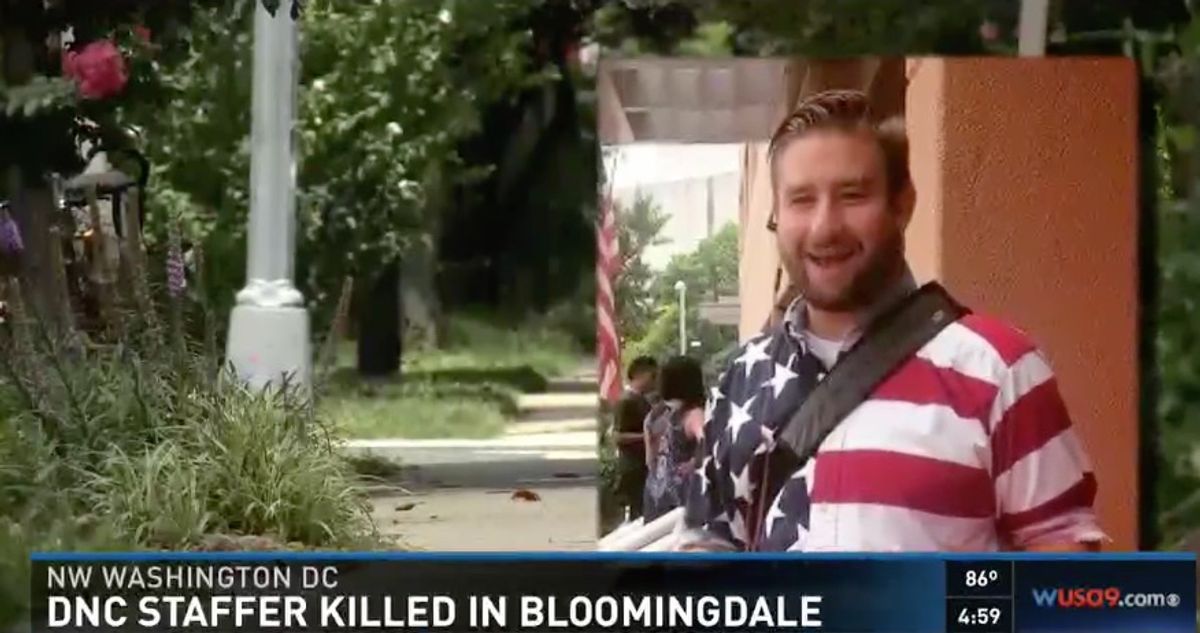 Claim:
DNC staffer Seth Rich was gunned down to prevent him from meeting with the FBI over plans to testify against Hillary Clinton.
Rating:

On 10 July 2016, Democratic National Committee (DNC) staffer Seth Conrad Rich was shot and killed just after 4 AM in Washington, D.C. Rich's tragic death was undoubtedly destined to feed a number of conspiracy theories due to his line of work and the proximity of the 2016 presidential election. Among those theories were myriad conflicting claims that Rich was covertly working to expose election fraud, collaborating with the Federal Bureau of Investigation (FBI) on an unspecified investigation, or a recycled assertion that he was imminently to testify against Hillary Clinton when he was gunned down. (No ongoing court case we could locate would involve any such testimony from Rich.)

On 13 July 2016, the notoriously unreliable conspiracy-flogging outlet WhatDoesItMean.com hoovered up the fresh tragedy as part of what appeared to be a series of articles capitalizing on recent deaths to drive conspiracies about Hillary Clinton. Describing the 27-year-old Rich as a "top" DNC "official," the site blared that he was bumped off by a Clinton "hit team":

A somber Foreign Intelligence Service (SVR) report circulating in the Kremlin today says that a top American Democratic Party staffer preparing to testify against Hillary Clinton was assassinated this past Sunday during a secret meeting in Washington D.C. he believed he was having with Federal Bureau of Investigation (FBI) agents, but who turned out, instead, to be a “hit team”—and who, in turn, were captured yesterday after a running gun battle with US federal police forces just blocks from the White House. [Note: Some words and/or phrases appearing in quotes are English language approximations of Russian words/phrases having no exact counterpart.]

This SVR report, though, says that DNC official Seth Rich was “lured/enticed” to his murder by this Clinton “hit team” who portrayed themselves as FBI agents wanting to secretly interview him—and that the expelled Russian diplomats had given the US State Department “electronic access” to so that they could be found.

Curiously, this report continues, US authorities, and while being able to track this Clinton “hit team” since 7 July, only confronted these assassins yesterday—and who before being captured, engaged in a gun battle with US federal police forces firing their fully automatic weapons before being trapped and surrendering just blocks from the US Capitol and White House.

In short, WhatDoesItMean.com held that Rich was under the impression he was to meet with FBI agents (at the bizarre hour of 4:00 AM) but in actuality had been set up for a fatal encounter with hit men working on behalf of Hillary Clinton. The site correctly quoted a D.C. Metro police press release, as we contacted the department and confirmed that release contained all known information about Rich's death:

Detectives from the Metropolitan Police Department’s Homicide Branch are investigating a fatal shooting that occurred in the 2100 block of Flagler Place, Northwest on Sunday, July 10, 2016.

At approximately 4:19 am, members of the Fifth District were patrolling the area when they heard gunshots. Upon arrival on the scene, members located an adult male victim conscious and breathing, and suffering from gunshot wounds. The victim was transported to an area hospital, where he succumbed to his injuries and was pronounced dead.

The decedent has been identified as 27-year-old Seth Conrad Rich, of Northwest, DC.

Police reported that Rich was conscious and breathing at the time of the shooting. Had he any information about his murder having been a set-up, he likely would have conveyed such to attending officer before he died of his wounds shortly thereafter. Contemporaneous news reports suggested that Rich's murder was indeed perplexing, as elements of the incident were dissonant with the appearance of a robbery gone awry:

Immediately after that portion, the article quoted the elder Rich regarding the moments prior to his son's death. According to Joel Rich, Seth was on the phone with his girlfriend when the shooting started, and Rich indicated to his girlfriend that he was nearly home and not headed out for an FBI meeting implausibly scheduled in the middle of the night on a Saturday:

Rich said Seth was talking to his girlfriend on the phone outside when the incident happened.

“Asked him if he was home yet and he said just about, and then she heard some noise, he said he had to call her back — I don't know when that conversation ended but at 4:18 two shots were fired,” said Rich.

According to Washington, D.C. television station WUSA, a string of robberies had occurred in the area where Rich was killed, and police believe that spate of crime was likely connected with his death. The station also reported that the 27-year-old staffer worked in voter expansion, helping people "find their polling places"; Rich's age and the relatively minor scope of his duties made him an unlikely linchpin in a conspiracy involving election fraud or any purported testimony against Hillary Clinton. The young staffer had only been employed with the DNC, where he was a Voter Expansion Data Director, since 2014, making his position and tenure an unlikely match-up with possession of crucial information for which he was supposedly killed.

Metropolitan Police Department spokesperson Alice Kim said "there is no indication that Seth Rich's death is connected to his employment at the DNC."

Slate also noted that the conspiracy theory version of Rich's death was lacking in both evidence and sense, yet WikiLeaks has since fanned the flames of speculation by offering a $20,000 reward for information about Rich's killer:

Julian Assange and his WikiLeaks organization appear to be actively encouraging a conspiracy theory that a Democratic National Committee staffer was murdered for nefarious political purposes, perhaps by Hillary Clinton.

Seth Rich was killed in Washington, D.C., in an early morning shooting that police have speculated was a failed robbery. Because Rich did voter outreach for the DNC and because we live in a ridiculous world, conspiracy theorists have glommed on to a fantastical story that Rich was an FBI informant meeting with purported agents who were actually a hit team sent by Hillary Clinton. There is of course absolutely zero evidence for this.

The fact that the idea is so absurd, though, has not stopped Assange from suggesting that Rich was murdered for nefarious political purposes either because he was an informant for the FBI or because he may have been a source in last month’s WikiLeaks release of thousands of DNC emails.

Rich's hometown newspaper, the Omaha World-Herald, also observed the lack of any substance to such rumors:

Fevered political conspiracy theories about the death of Seth Rich have been swirling through online comment sections and websites ever since the Omaha native was gunned down early on July 10 close to his home in northwest Washington, D.C.

All indications from police have been that Rich’s death was most likely the result of a botched robbery — a sadly too-common case of a promising young man cut down simply by being in the wrong place at the wrong time.

But that hasn’t stopped wild Internet speculation from going viral, based in part on the fact that Rich worked at the Democratic National Committee. Internet commenters have suggested that Rich was behind the disclosure of DNC emails to WikiLeaks that helped force the resignation of Rep. Debbie Wasserman Schultz of Florida as chairwoman. The conspiracy theorists got new ammunition when WikiLeaks announced a $20,000 reward for information leading to a conviction in Rich’s death.

Never mind the evidence in favor of a robbery, the fact that the leaked emails were released well after his death or even that WikiLeaks itself stressed that the reward should not be taken as an implication that Rich was involved in the email leak.

A spokesman for the Rich family said that people "attempting to politicize this horrible tragedy" are "causing more harm than good":

[S]ome are attempting to politicize this horrible tragedy, and in their attempts to do so, are actually causing more harm than good and impeding on the ability for law enforcement to properly do their job. For the sake of finding Seth's killer, and for the sake of giving the family the space they need at this terrible time, they are asking for the public to refrain from pushing unproven and harmful theories about Seth's murder.

Rich was the second deceased individual "connected" to Clinton by WhatDoesItMean.com and the third inaccurately reported as endangered by the candidate. The same outlet falsely claimed hacker Guccifer (Marcel Lazăr Lehel) was missing and presumed dead after he purportedly hacked into Clinton's e-mail, and just prior to that the site claimed former UN official John Ashe had been murdered on the eve of his providing scheduled testimony against Clinton. Guccifer was confirmed alive and well by officials at the facility in which he was housed, and a federal prosecutor's office affirmed Ashe's legal troubles were in no way connected to Clinton.

A common thread between the three rumors was a blogger known by the nom de plume "Sorcha Faal." RationalWiki describes Faal's WhatDoesItMean.com conspiracy site as "sensational" and "outrageous":

While it's true police maintain an open investigation into Seth Rich's death, the claim connecting him to Hillary Clinton was the third of its sort to emerge from the same conspiracy-monger in mid-2016. All those rumors were variations on the long-circulating (and false) "body bags" claims that the Clintons habitually do away with once-loyal associates turned political liabilities. Prior to publishing the trio of Clinton-related fabrications, the same site and blogger held that President Obama had ordered the military to nuke the city of Charleston (which didn't happen), that Rear Admiral Rick Williams was fired because he revealed Obama's purchase of a mansion in Dubai (Williams was actually terminated for misconduct), and that Vladimir Putin and Barack Obama were enmeshed in a potentially conflict-starting dispute over the practices of the Monsanto agribusiness corporation.