Did a Russian Asbestos Company Put Trump's Face on Their Product?

A Russian asbestos producer shared a photograph of their product to social media with a seal of Donald Trump’s face and the text "Approved by Donald Trump”. 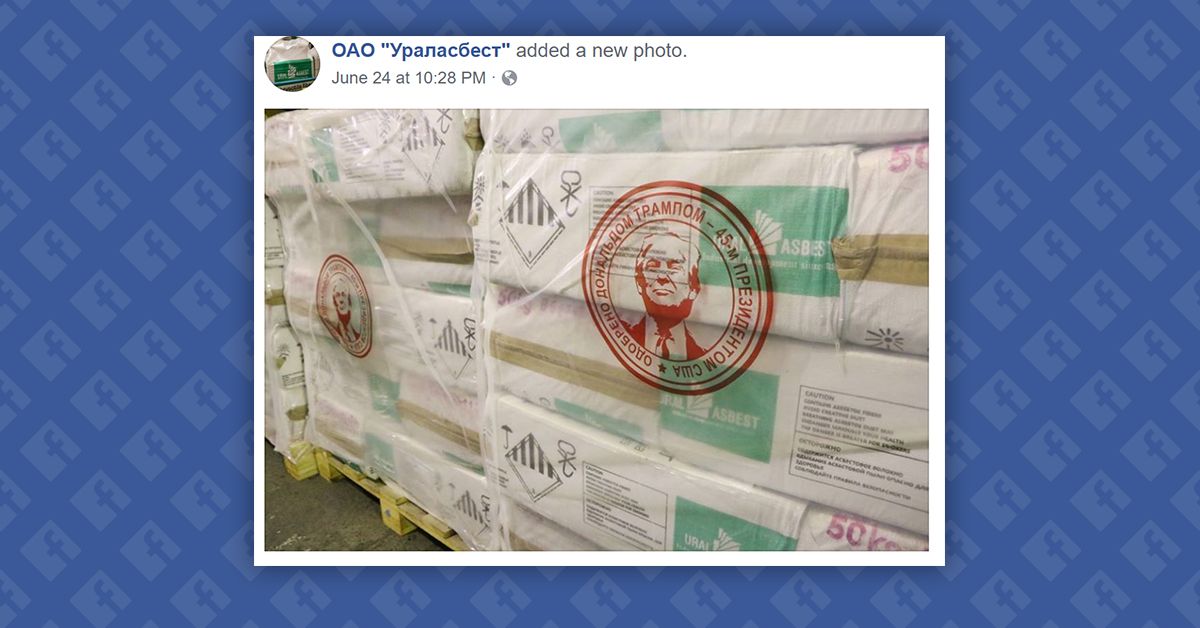 Claim:
A Russian asbestos company placed a seal with the face of President Donald Trump on their product with the note "Approved by Donald Trump, 45th President of the United States."
Rating:

On 25 June 2018, a Russian mining company named Uralasbest, which is one of the world’s largest producers of asbestos, posted a message of support for President Trump on their official Facebook and VK (a Russian version of Facebook) pages. The post included photographs of packed asbestos material adorned with the face of Trump and the text "Approved by Donald Trump, 45th President of the United States." Asbestos is a mineral that was once widely used in construction projects for its fire resistant properties, but research has since linked it to a variety of cancers, most notably lung cancer and mesothelioma.

The non-profit health and environmental protection Environmental Working Group, who first called attention to the Uralasbest post, provided an English translation of the text that was shared alongside the image: "Donald is on our side! ... He supported the head of the United States Environmental Protection Agency, Scott Pruitt, who stated that his agency would no longer deal with negative effects potentially derived from products containing asbestos. Donald Trump supported a specialist and called asbestos '100% safe after application.'"

These images, as they were posted to the official social media accounts of Uralasbest, are genuine. Also genuine is President Trump’s support of the asbestos industry. Trump once opined, in his 1997 book The Art of the Comeback, that efforts to reduce and regulate asbestos (a material he claimed was “100% safe” once applied) in building construction were part of a mob-led conspiracy: "I believe that the movement against asbestos was led by the mob, because it was often mob-related companies that would do the asbestos removal. Great pressure was put on politicians, and as usual, the politicians relented."

In June, when Uralasbest posted their message of support, then-Administrator of the EPA Scott Pruitt had recently announced new interpretations of the Toxic Substances Control Act that could allow for “new uses” of asbestos to be approved in the United States. While this move would not allow for previously banned uses to be considered, it was a reversal of Obama-era rules that barred the EPA from considering any new uses for asbestos.