Does Website for Wisconsin Republicans Say 'Prepare for War'?

The St. Croix County Republican Party supposedly kept the phrase on its website, despite requests to take it down. 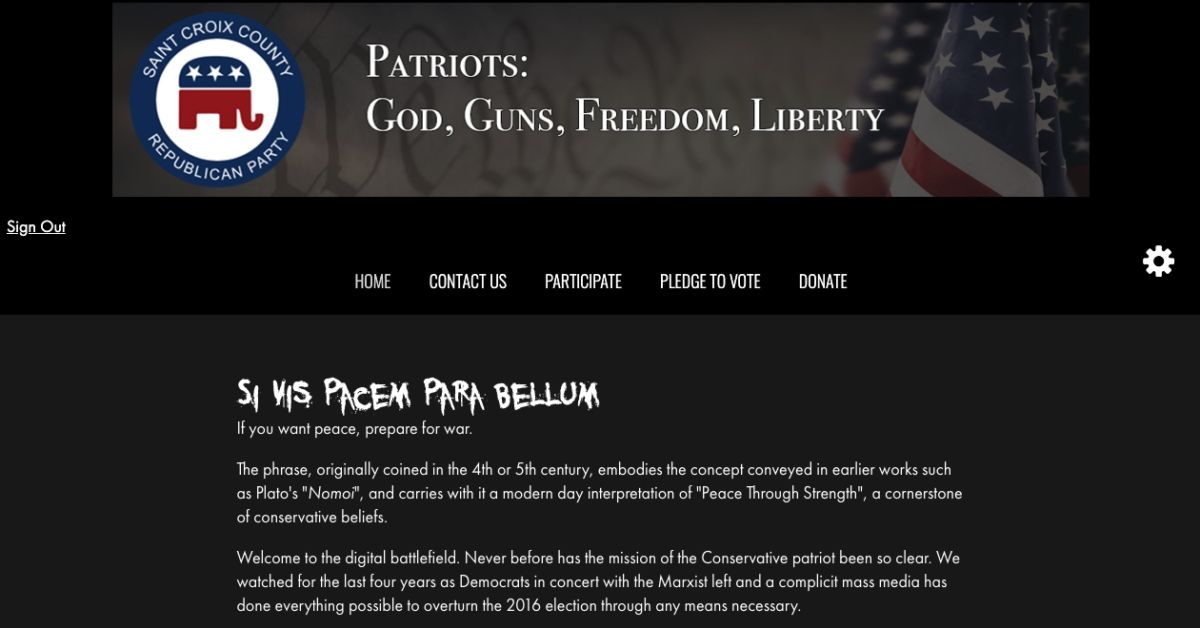 Image Via Screenshot via stcroixrepublican.org

Claim:
A Republican group in Wisconsin refused to remove an online message urging supporters to "prepare for war" despite the U.S. Capitol insurrection on Jan. 6, 2021.
Rating:

On Jan. 12, 2021, news reports surfaced alleging a web page for Wisconsin's St. Croix County Republican Party told supporters to "prepare for war" despite urging from the state party to remove the message and the deadly insurrection by supporters of U.S. President Donald Trump at the U.S. Capitol the previous week. The reports were true. As of this report, the homepage for the local Republican group in northwestern Wisconsin read, "Si vis pacem, para bellum" — the Latin adage, "if you want peace, prepare for war." Then, underneath that heading, the page said in English:

If you want peace, prepare for war.

The phrase, originally coined in the 4th or 5th century, embodies the concept conveyed in earlier works such as Plato's "Nomoi", and carries with it a modern day interpretation of "Peace Through Strength", a cornerstone of conservative beliefs.

Welcome to the digital battlefield.

The message also perpetuated the conspiracy theory that "Democrats in concert with the Marxist left and a complicit mass media" were running a coordinated scheme to undermine conservative Americans and try to overturn Trump's 2016 presidential win, without providing proof to support the claims.

The page also alleged Trump's political opponents colluded in an illegal scheme to block him from serving another presidential term, though numerous court battles and reviews by election security experts proved that did not happen. Rather, President-elect Joe Biden defeated Trump under election laws outlined in the Constitution and federal and state statutes: He received at least 270 electoral votes. (See here for all of our fact-checking content related to 2020 voter fraud claims.)

After those false claims, the St. Croix Republican Party's homepage said Trump radically changed the party, and that "patriots need to continue the fight" and "stand and be counted as a conservative warrior" to uphold the Constitution and remove "leftist tyrants" from elected positions in Wisconsin.

According to online archives of the URL, stcroixrepubblican.org, the website at one point called for "eliminating" those political opponents instead of removing them.

The St. Croix County party’s chairman, John Kraft, told the Milwaukee Journal Sentinel that the homepage included the phrase "prepare for war" before the deadly insurrection in defiance of Biden's presidential win on Jan. 6. He did not say when, exactly, the page was first posted, and did not respond to the local newspaper's question about whether he thought about taking down the message after the attack by right-wing extremists.

Kraft told the newspaper he "can't help what twisted inferences local Democrats choose to attribute to it."

On Jan. 9, Kraft said on his Facebook page that “it’s never been clearer that we are absolutely at war with the left," according to The Associated Press.

A representative of the group did not respond to Snopes' request for an interview for this report, though we will post updates when, or if, someone returns our message.

According to Wisconsin Republican Chairman Andrew Hitt, the state party does not control the local parties, and it asked St. Croix County Republicans to remove the call to "prepare for war" before the violent insurrection, though he did not specify a date for the request. He told the Milwaukee Journal Sentinel:

"Especially in light of recent events, it's an ill-chosen phrase to express their sentiments," Hitt said. "We suggested at an earlier date they remove this, but they declined to take our advice."