Do Democrats Want to Ban the POW/MIA Flag Because It Is 'Racist'? 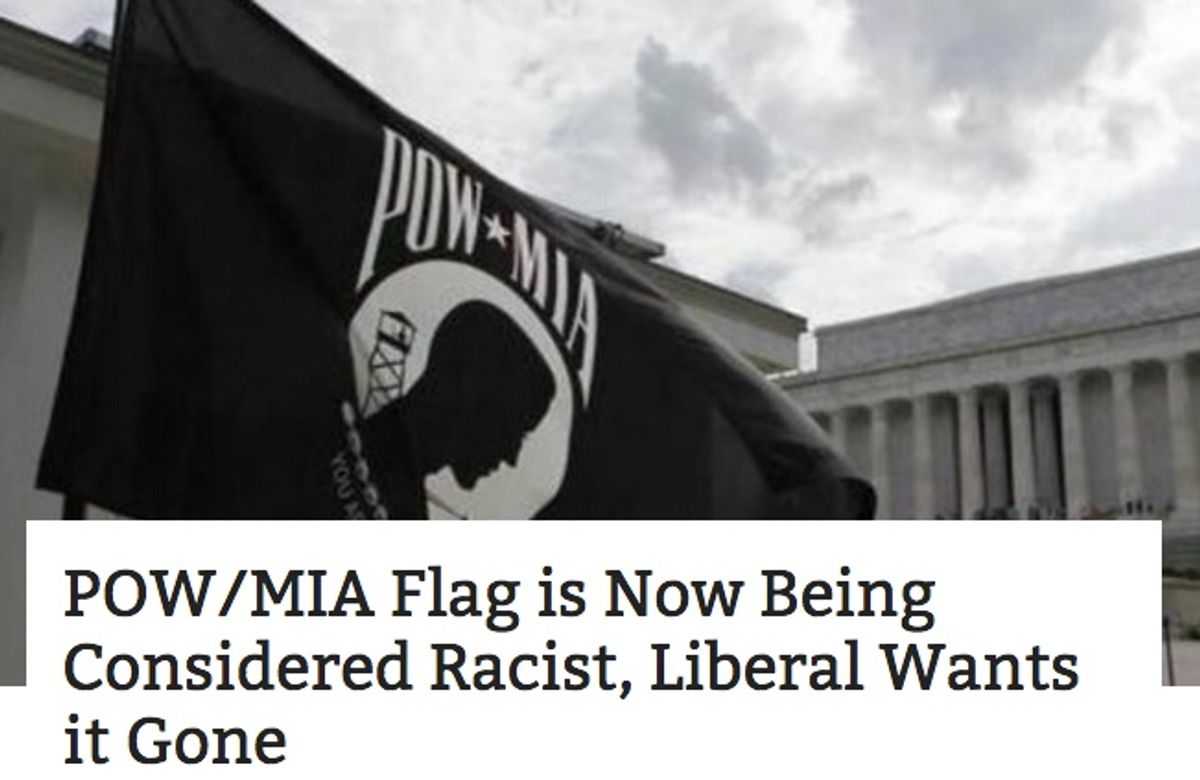 Claim:
Democrats are trying to ban the POW/MIA flag because it is racist.
Rating:

A national correspondent for the Washington Spectator described the POW/MIA flag as a symbol of "racist hate" and opined that it should be pulled down.

Liberals and/or Democrats have not organized a movement to discontinue display of the POW/MIA flag.

Owing in part to the then-recent Confederate flag "ban" controversies, the idea quickly caught on that "the left" also sought to ban the POW/MIA flag because it was "racist":

Why do people now want to ban the POW/MIA flag? https://t.co/DceQwBhDJD pic.twitter.com/6zJlbfRaQJ

So now they are trying to ban the POW/MIA flag (a symbol of America) because it's apparently Racist? What is happening to this country...

On 11 August 2015, Newsweek published a highly controversial opinion piece by Rick Perlstein titled "It’s Time to Haul Down Another Flag of Racist Hate," an article originally published by the Washington Spectator (for whom Perlstein serves as a national correspondent) under the title "The Story of the Other Racist Flag."

Perlstein referenced a then-current controversy over displays of the Confederate flag at the beginning of his article, segueing from there into a criticism of the POW/MIA flag (which commemorates prisoners of war and soldiers missing in action and is especially popular among Vietnam veterans). Arguing that "Richard Nixon invented the cult of the 'POW/MIA' in order to justify the carnage in Vietnam," Perlstein aired his grievances about the POW/MIA banner:

You know that racist flag? The one that supposedly honors history but actually spreads a pernicious myth? And is useful only to venal right-wing politicians who wish to exploit hatred by calling it heritage? It’s past time to pull it down.

Oh, wait. You thought I was referring to the Confederate flag. Actually, I'm talking about the POW/MIA flag.

It began, as cultural historian H. Bruce Franklin has documented, with an opportunistic shift in terminology. Downed pilots whose bodies were not recovered — which, in the dense jungle of a place like Vietnam meant most pilots — had once been classified "Killed in Action/Body Unrecovered."

During the Nixon years, the Pentagon moved them into a newly invented "Missing in Action" column. That proved convenient, for, after years of playing down the existence of American prisoners in Vietnam, in 1969, the new president suddenly decided to play them up.

He declared their treatment, and the enemy’s refusal to provide a list of their names, violations of the Geneva Conventions — the better to paint the North Vietnamese as uniquely cruel and inhumane. He also demanded the release of American prisoners as a precondition to ending the war.

This was bullshit four times over: first, because in every other conflict in human history, the release of prisoners had been something settled at the close of a war; second, because these prisoners only existed because of America's antecedent violations of the Geneva Conventions in bombing civilians in an undeclared war; third, because, as bad as their torture of prisoners was, rather than representing some species of Oriental despotism, the Vietnam Communists were only borrowing techniques practiced on them by their French colonists (and incidentally paid forward by us in places like Abu Ghraib). And finally, our South Vietnamese allies' treatment of their prisoners, who lived manacled to the floors in crippling underground bamboo "tiger cages" in prison camps built by us, was far worse than the torture our personnel suffered.

Perlstein's article offended many readers, as exemplified by Newsweek's Facebook page, which featured no link to Perlstein's article but was nonetheless overwhelmed with angry comments. In response to the controversy, the Young Conservatives website then published an article titled "POW/MIA Flag is Now Being Considered Racist, Liberal Wants It Gone," claiming "liberals" wanted to "ban" the POW/MIA flag because it was "racist":

This time, they're focusing on the Prisoners of War/Missing in Action (POW/MIA) flag.

Because racism, of course.

The difference between a liberal and a conservative?

A conservative doesn’t demand everything be banned — among numerous other issues.

The American flag will be next, it’s just a matter of time.

National Review and RedState also published articles and/or tweets about the controversy:

So now the Left wants to take down the POW/MIA flag because it's racist... for some reason. https://t.co/jptpLF3uIm pic.twitter.com/Tf3JC8rSFH

While it's true a single opinion piece described the flag as "racist" (in its title and opening paragraph), the view represented was that of an individual writer and is not one being widely espoused by any large segment of "the left," Democrats, or Americans in general. And although Perlstein criticized the flag at length in his column, no mainstream groups of any political stripe have sought the POW/MIA flag's removal, retirement, or "ban" due to its supposed status as a "racist" symbol.