The Truth About Confederate History: Part 1

Misinformation about the antebellum South, the Civil War, and the Confederate flag is rife on the internet. 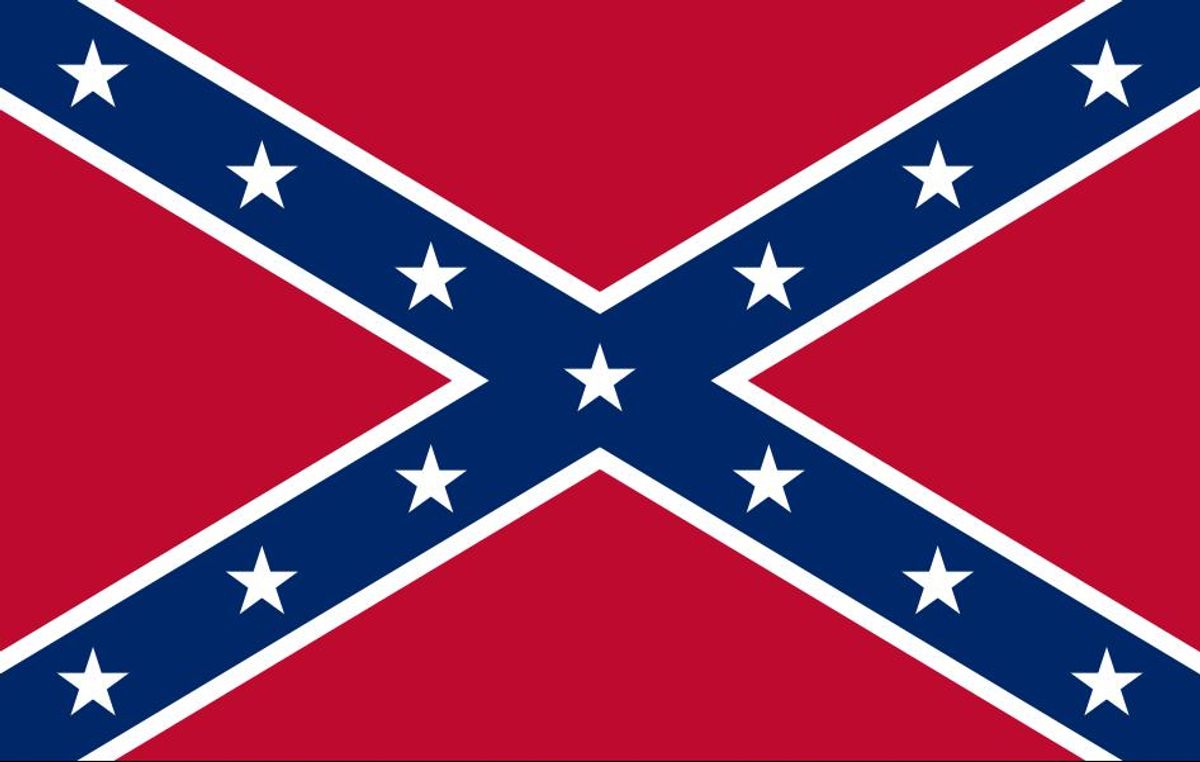 Claim:
A list dispels 'falsehoods and inaccuracies of Confederate and Southern history.'
Rating:

Misinformation about the antebellum South, the Civil War, and the Confederate flag is rife on the internet. Perhaps nowhere more so than in a widespread and ironically titled "Truth about Confederate History" article.

Being a Short Digression on the History of the Confederate Flag

In the wake of the June 2015 racially motivated shooting that left nine people dead at the Emanuel African Methodist Episcopal Church in Charleston, South Carolina, and the renewed debate that event prompted about the propriety of displaying Confederate flags on the grounds of the South Carolina state capital (and elsewhere), a long-circulating article advertised as dispelling "falsehoods and inaccuracies of Confederate and Southern history" attracted renewed interest.

Addressing and correcting the many inaccuracies and misleading statements contained in that piece would require a very lengthy article, so we have chosen to tackle it here in smaller, more easily digestible chunks. In this, our first installment, we will focus on several sections of that piece about "the Confederate flag" — which requires that we first provide a brief history of the Confederate flag (or, more accurately, the several Confederate flags).

The flag that officially represented the government and nation identifying itself as the Confederate States of America (CSA) for the first two years of that entity's existence was adopted on 4 March 1861. Patterned after the U.S. national flag ("the Stars and Stripes"), it featured two large red horizontal stripes above and below a large white stripe, and a blue canton in the upper left bearing a circular pattern of white stars equal in number to the number of states in the confederacy (and like the U.S. national flag, more stars were added to the design as additional states were admitted to the Confederacy). This is the flag (which was the CSA's national flag until 1 May 1863) that was known as the "Stars and Bars," not the Confederate battle flag to which that term is now commonly applied: The first Confederate national flag posed something of a problem, however. In the days before radio and telephonic technologies allowed for real-time communications between military commanders and their units in the field, visual markers distinguishing friendly units from enemy units (and friendly units from each other) were of primary importance in the assessment of battles as they unfolded. Flags were typically carried into battle for this purpose, but the First Confederate flag was too easily confused with the United States flag at a distance.

Accordingly, at the end of 1861 the Army of Northern Virginia adopted a (square) battle flag based on a design that had initially been rejected for the First Confederate flag and was distinct from that of the United States flag: a red field with a white-bordered dark blue saltire, the latter again bearing white stars equal in number to the number of states in the Confederacy. This banner (which became known as the "Southern Cross") was also later used in its more familiar rectangular form as the battle flag of the Army of Tennessee, and (with a lighter blue saltire) as the Second Confederate Navy Jack from 1863 onwards: The first Confederate national flag was widely disliked for a number of reasons (primarily its aesthetic resemblance to the United States flag and its attendant confusion with the U.S. flag on the battlefield), so on 1 May 1863 the Confederate States of America adopted a new national flag known as "the Stainless Banner," said by its designer to represent the "supremacy of the white man":

Our idea is simply to combine the present battle-flag with a pure white standard sheet; our Southern Cross, blue on a red field, to take the place on the white flag that is occupied by the blue union in the old United States flag, or the St. George's cross in the British flag. As a people, we are fighting to maintain the Heaven-ordained supremacy of the white man over the inferior or colored race; a white flag would thus be emblematical of our cause.

That new flag consisted of a white field with a union in the upper left identical to the (by then popular) square battle flag used by the Army of Northern Virginia: The second Confederate national flag design created its own set of problematic issues, namely that (especially when the flag hung limp in windless conditions) its canton could be obscured, making it appear to be an all-white flag of truce. To ameliorate this problem, a red vertical bar was added to the right-hand side of the white field, and this design (known as "the Blood-Stained Banner”) was adopted as the third Confederate national flag on 4 March 1865: Given that the Confederacy fell within a few months of the adoption of the "Blood-Stained Banner," very few flags of this design were manufactured or used.

Now let's tackle some of the "Myth vs. Fact" sections (reproduced in the gray boxes below) from the "Truth about Confederate History" article referenced above.

One "Myth vs. Fact" section claims:

MYTH: The Confederate Battle Flag is known as the "Stars & Bars."

As related above, it is true in literal historical sense that the term "Stars and Bars" properly applies only to the first Confederate national flag and not to the much more familiar Confederate battle flag. But insisting on that nomenclature is like arguing that the lowest denomination of U.S. coinage should properly be called a "one-cent piece" and not a "penny" — some linguistic usages have become so entrenched in American culture over a long period of time that those who maintain those usages are wrong are now the outliers.

FACT: Not true. While the Southern Battle flag was carried into battle, the Southern Nation had 3 different National flags during the course of the war.

The First National flag was changed due to a resemblance of the US flag.

The Second National flag was subsequently modified due to the similarity to a flag of truce.

The Third National flag was the adopted flag of the Confederacy.

Here we come to an entry that might properly be characterized as "technically true yet misleading." Yes, all of the statements above are correct: the Confederate battle flag was never officially the national flag of the Confederate States of America; in that specific form it represented military entities and not the civil government. Nonetheless, by the mid-point of the Civil War the Southern Cross design had become so well-known and popular that it was incorporated as an element of a new Confederate national flag, and it was widely recognized at the time by the citizens of the Confederacy as a symbol of their nation and cause.

Now we move into an area of deliberate obfuscation: The fact that the Confederate battle flag was never the official national flag of the Confederacy is a technical historical aspect which is of little import today -- that flag was nevertheless used by officially sanctioned Army and Navy units that fought in the service of the Confederate government, its Southern Cross design was incorporated into the Confederate national flag, and that banner was popularly recognized and regarded at the time as a symbol of the Confederate nation by the people who lived there. If it is considered a symbol of slavery and white supremacy by many people today, in part that's because it did indeed represent a government, military, and people who fought to preserve those aspects of their society.

Hardly anyone would rationally argue, for example, that the following is not (or should not be) regarded as a symbol of Nazism and its ideals simply because it was the flag of the Wehrmacht Commander-in-Chief and not the official national flag of Nazi-era Germany: MYTH: The Confederate Flags are an authorized symbol of Aryan, KKK and hate groups.

FACT: Quite the contrary. These despicable organizations such as the KKK and Aryans have taken a hallowed piece of history, and have plagued good Southern folks and the memories of fine Confederate Soldiers that fought under the flag with their perverse agenda. IN NO WAY does the Confederate Flag represent hate or violence. Heritage groups such as the [Sons of Confederate Veterans] battle daily the damage done to a proud nation by these hate groups. The SCV denounces all hate groups, and pridefully boast HERITAGE – NOT HATE.

Herein lies the problem with symbols: They have no inherent meanings; they have only whatever meanings people choose to read into them, and different people can associate very different meanings with the same symbol. The Confederate battle flag is now regarded in many different ways — as a symbol of slavery, as a rallying banner for white supremacists, as a quaint historical artifact, as a memorial to those who fought gallantly and bravely (even if it was in the service of cause no longer considered virtuous), as a general emblem of rebellion against authority, as a benign display of regional pride, or even as a fond reminder of two "good ol' boys" who were "never meanin' no harm."

It is true that for several decades after the Civil War, the Confederate battle flag was not widely regarded as a negative symbol. Its use was largely limited to historical ceremonies associated with veterans' events and war memorials; the flag did not become the symbol most prominently associated with the Confederacy until several decades after the Civil War ended, and it was not widely perceived as a politically polarizing symbol until it was appropriated by segregationist politicians and groups in the middle of the twentieth century.

The Sons of Confederate Veterans may sincerely object to the Confederate battle flag's use by Neo-Nazis, skinheads, and other extremist groups, and perhaps some of the men who fought and died for the Confederacy would as well if they were alive today. But just as with the swastika, it's likely to be a very, very long time before that symbol can be reclaimed and regarded in anything approaching a neutral manner, and probably not until the social issues underlying the public perception of that symbol have been more thoroughly canvassed.