Was a 'Pedophiles Are People Too' Notice Posted Near an Oregon School?

A sign reading "Pedophiles are People Too" was briefly pinned to a telephone pole near a school in Oregon, but this poster was likely created as part of a troll campaign. 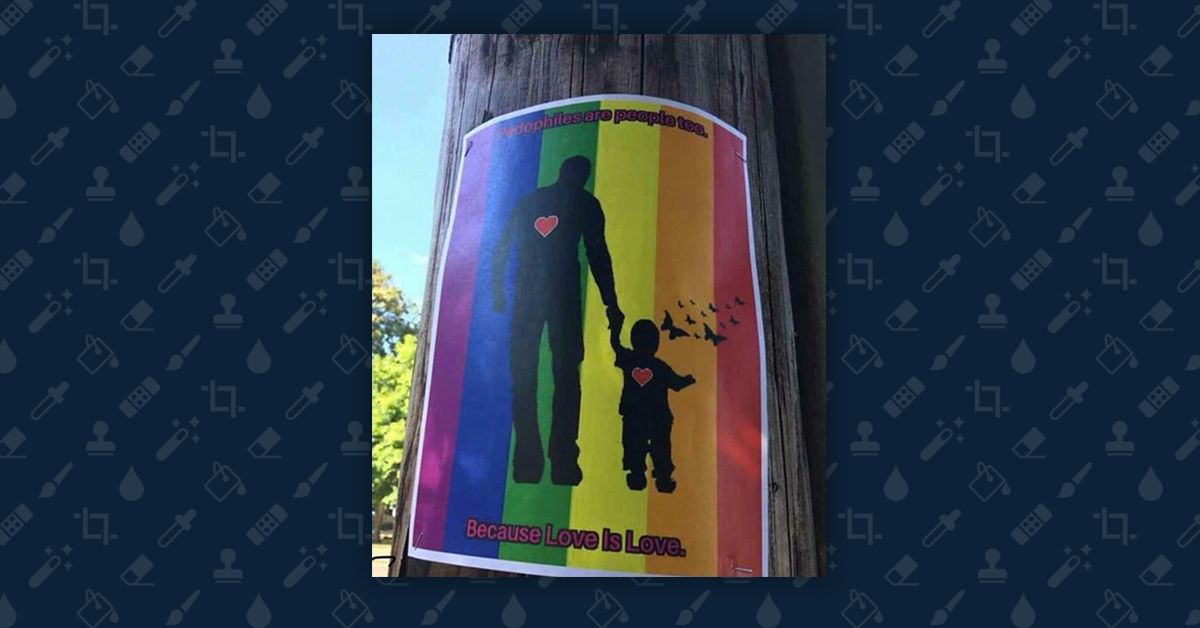 Claim:
A pedophilia group put up a sign reading "Pedophiles are People Too" near a school in Oregon.
Rating:

A sign reading "Pedophiles are People Too" was briefly posted on a telephone pole near a school in Oregon.

The sign has no apparent connection with a genuine attempt to integrate pedophiles into the LGBTQ community or to "normalize" pedophilia.

On 27 July 2018, an image of a sign reading "Pedophiles Are People Too" and "Love is Love" over a rainbow background reminiscent of the LGBTQ pride flag started making its way around social media:

And so it begins... pic.twitter.com/ku6FQpBbAO

Facebook posts were often accompanied by text indicating the sign had been stapled to a telephone pole near a school in Oregon:

Edited to add - I do NOT support this at all. I am posting this because I am concerned because I think children should be protected. This is NOT ok by any standards and should NEVER be considered normal behavior. And since no one reads this to the bottom and sees it - this is in no way shape or form accepted by the LGBTQ community. —-

As a parent, this is extremely alarming and NEEDS to be addressed for our children's safety:

There is a movement being pushed right now, nationally and on a global scale - by a growing group of men and women trying NORMALIZE pedophilia. There are several TED Talks supporting this, many celebrities publicly defending it, and now they are trying to be masked and hidden under the umbrella of the "love is love" movement...

Trying desperately to piggy back off the LBGTQ community, and the endless numbers of sexual preferences and gender identities newly created lately, they has given us the “MAPS” movement which stands for “minor attracted person.” Because every false narrative needs a misleading euphemism.

If you get confused trying to make sense of the perverse jargon, here are some definitions:

NOMAPS: It doesn’t mean they’re against it like you’d think, it means they’re a “non offending” non-contact pedophile, which they seem to think makes them moral.

NAMBLA: The North American Man/Boy Love association, their goal is to abolish all ages of consent.

Nepiophile: Someone who’s sexually attracted to toddlers and babies.

THIS IS NOT JUST SOMETHING FAKE TO FEAR-MONGER. This was physically stapled to a phone pole in the Portland, OR area. THIS IS IN OUR BACKYARDS NOW.

Please, I urge you, to be diligent and be oh so careful. Please watch who you let in to your children's lives. This is a sad time in the world, it has fallen so far into confusion and depravity... trying to blur the lines between right and wrong. Keep your children innocent and safe the best you can.

ETA: Please note that this is NOT condoned by the LGBTQ community.

Portland television station KATU confirmed that this sign was briefly posted near a school in the city of West Linn, and that it was removed shortly after it was noticed by area residents.

While it's still unclear who put up this particular sign, it is eerily similar to previous troll campaigns aimed at connecting the LGBTQ community with pedophiles. In December 2017, for instance, users on the internet forum 4Chan concocted a false rumor that a "P" (for "Pedosexual") was being added to the well known LGBTQ initialism. 4Chan users were encouraged to spread a Photoshopped flyer bearing taglines such as "love is ageless," a more on-the-nose version of the tagline seen on the Oregon poster, "love is love."

A similar ruse was circulated on Tumblr in June 2018. That time an image supposedly showing a pride flag for MAPs (Minor Attracted Persons) was shared along with baseless rumors about pedophiles' supposedly "rebranding" themselves in an effort to gain acceptance into the LGBTQ community.

These campaigns, as well as the "Pedophiles are people too" poster found in Oregon, all push the unfounded notion that the LGBTQ community has been party to a concerted effort to legitimize and normalize pedophilia. Our previous investigations into these troll campaigns, however, has found that no legitimate LGBTQ organizations have created, endorsed, or promoted any such idea.

Cameron Whitten, the executive director of the LGBTQ community and non-profit Q Center organization in Oregon, said of the mysterious poster that "It's just very clear that this message was meant to stigmatize and stereotype LGBTQ people. At a time when we are facing homophobia, transphobia, it is not helpful for these kinds of harmful messages to be disseminated out."

It should also be noted that while these fabricated campaigns have repeatedly attempted to link homosexuality with pedophilia, no such connection has actually been found: