The ‘Otherkin Policy’ at Kokomo High School Is Satire 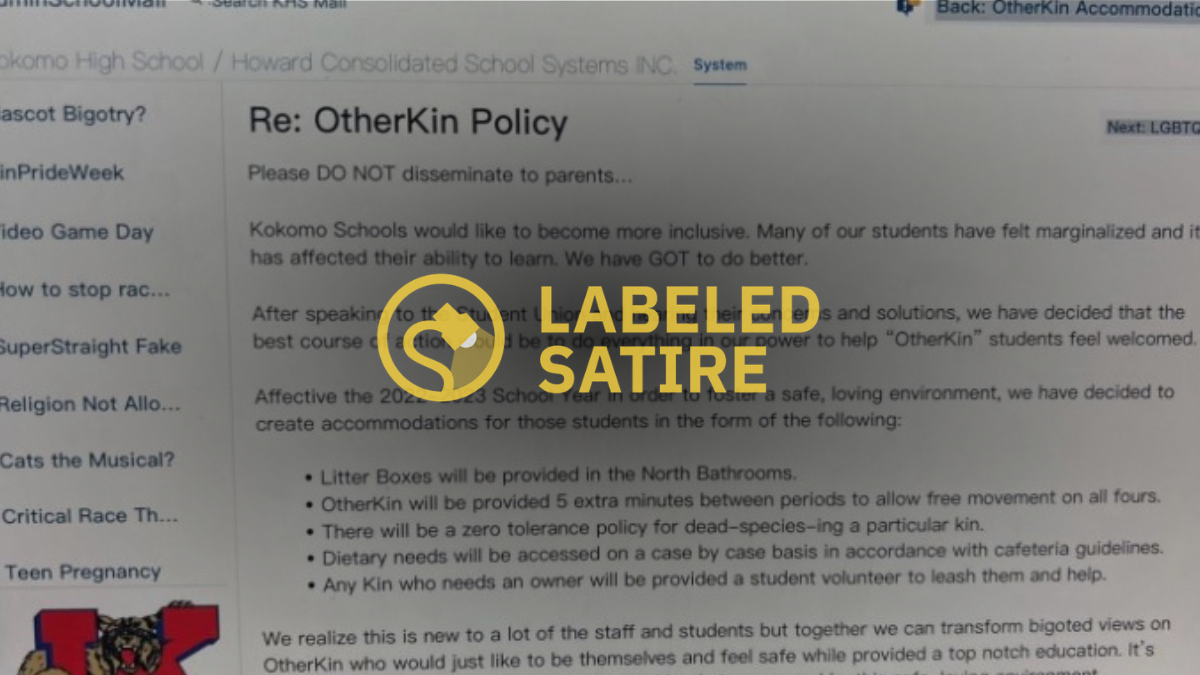 Claim:
A high school in Indiana sent out an email informing teachers of a new "otherkin policy" to accommodate students who identify as part animal.
Rating:

In April 2022, another dubious rumor about schools installing litter boxes for students who identify as part-animal was circulated online. This time, the rumor came in the form of a fake email that was supposedly sent out to teachers at Kokomo High School informing them of a new "otherkin policy." This is not a genuine email about a new "otherkin policy" that was sent to teachers at Kokomo Highschool. This is a piece of fictional content that originated with a satire site.

The above-displayed image comes from the "Kokomo Press," a Facebook page that labels itself as satire. In its about section, the page states that the "Kokomo Press" is a reinvention of a previous satire page, the Kokomo Scanner.

This rumor about an "otherkin policy" is a riff on a previous bit of disinformation that went viral thanks in part to the "LibsofTikTok," a social media account that frequently posts anti-LGBTQ content, often packaged alongside false rumors. The Washington Post reported:

Her anti-trans tweets went especially viral. She called on her followers to contact schools that were allowing “boys in the girls bathrooms” and pushed the false conspiracy theory that schools were installing litter boxes in bathrooms for children who identify as cats. She also purported that adults who teach children about LGBTQ+ identities are “abusive,” that being gender-nonconforming or an ally to the LGBTQ+ community is a “mental illness,” and referred to schools as “government run indoctrination camps” for the LGBTQ+ community.

Rumors about schools installing litter boxes weren't confined to the internet. Some Republican lawmakers took these false rumors seriously and mentioned them on social media and during debates. The Guardian reported:

A Nebraska state lawmaker apologized on Monday after he publicly cited a persistent but debunked rumor alleging that schools are placing litter boxes in school bathrooms to accommodate children who self-identify as cats.

State senator Bruce Bostelman, a conservative Republican, repeated the false claim during a public, televised debate on a bill intended to help school children who have behavioral problems. His comments quickly went viral, with one Twitter video garnering more than 300,000 views as of Monday afternoon, and drew an onslaught of online criticism and ridicule.